It has come to attention recently with quite a number people being lost in the bush with the main reason that they were following the wrong type of triangle marker.  As a person who goes tramping quite a bit, I thought that I would explain the different types of triangle markers that you see in the bush. 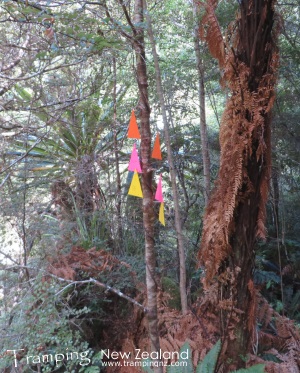 A number of different triangle markers

Orange (and possibly a white strip if following an old low use track/route) - This is a track marker, this is what you should be following to keep to the track.  Generally these will be placed about 30m apart and normally you should be able to see the next one in front (unless the track is clearly defined, such as a track of a great walk standard).  Sometimes if going through a large clearing there would be a marker as you exit and one as you enter, which also the same if crossing a river.  Tracks can also be marked by cairns or poles above the bush line and alpine areas.

Pink/Yellow/Blue - This is not a track marker, don't be confused.  These indicate trap/bait lines or actual traps for pest control such as possums & stoats.  In a number of cases there will be written information which generally identifies the trap/bait line and a number to identify trap/bait number (sometimes this can also indicate distance from start of the line).  Sometimes these lines can follow the track which normally indicate that the trap if just off to the side of the track.

They’re all different, but they all have similar characteristics that make them simply irresistible. If you don’t hike, you should strongly reconsider. Here’s why: