Auckland is New Zealand's largest urban area. The Auckland isthmus is situated between the Hauraki Gulf on the east coast and the Manukau Harbour on the west coast of the North Island. Auckland is home to over 1 million people, 1/3 of New Zealand's population. 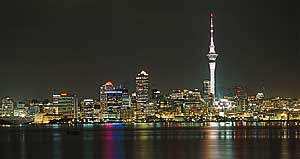 View of Auckland's Skyline at night

Auckland’s geography is a warm, humid climate has inspired a lifestyle that’s different to the rest of the world. In just half an hour you can be almost anywhere - sailing to an island, tramping through the bush, climbing up a volcano or wandering on a wild black sand surf beach.

Auckland is a big playground to New Zealander's and tourists alike. The Hauraki Gulf is dotted with over 50 islands and this is where the America's Cup used to be raced. Auckland has over 50 volcanoes located within the region, many of them are dormant, including Rangitoto Island which last erupted over 600 years ago.

Tawharanui Regional Park is located north of Auckland. Tawharanui has a surf beach, camping area, farmland, walking tracks and more. I have camped here 3 times, one of the most remembered one was the Awatuna Venturers end of year camp which lasted 4 days. 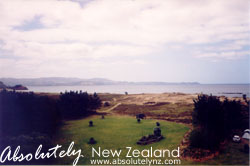 Woodhill is a pine forest and the most popular event here is motorcycling through the tracks. Have done a tramping competition here with the Awatuna Venturers that also involved camping and bush skills. Nearby to Woodhill Forest is Muriwai Beach (see below) and Parakai Hot Pools. Have camped at the hot pools - they have fast slides when put in turbo mode.

North Shore City is the 4th largest city in New Zealand. Located on the northern shores (over the harbour bridge), surrounded by sea, the North Shore has an unbroken 140km urban coastline.

At Long Bay there is one of the most busiest regional parks in Auckland. Long Bay regional park is right on a 1km length of beach and surrounded by farm land and extends north to Okura River. This is a great place to visit in summer and have a BBQ picnic, swim, walk and explore the marine reserve. At present the regional park is trying to be expanded by the Great Park Society, instead of a new housing development.

This is a big playground for Aucklander's who are into the water during the summer. Sailing is the best experience that you can have on the Gulf. There are many Islands and places you can visit. Have also sailed to Rekino Island two times. On one occasion with the Awatuna Venturers we had a coastguard day where we learnt a few skills on maps and radios.

Rangitoto Island is a young volcano that is at the entrance of the Waitemata Harbour. You can catch a ferry to Rangitoto Wharf or Islington Bay and climb to the top. You get a 360 degree view of the Auckland area. I have often stayed in a batch and climbed to the top at night - fascinating sight, have slept at the top once, it was a great experience. Make sure you visit neighbouring island Motutapu Island and walk along the farm land to Billy Goat Point.

Waiheke Island is known for being a popular wineary region. Waiheke Island is only a 35 minute ferry trip from Auckland. In the summber this is a popular destination for boties, I have also sailed here on a Rover end of year trip, which was a lot of fun.

Kawau Island is another popular destination. Is populated with wallabies and have camped a few times here. Marahangi Park nearby is a good destination to visit.

Great Barrier Island is one of the most untouched islands off the coast of New Zealand at the outer edge of the Hauraki Gulf. There are golden beaches, crystal clear waters and native forest, basically nature in all its rugged beauty.

This is well known to Aucklanders to were some of the water supply comes from and great tramping tracks. 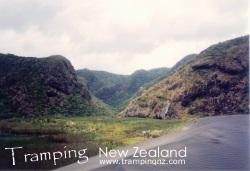 Goldies Bush track is a very easy going and is a good challenge for a beginner. This track crosses the nearby river several time (I lost count how many times). I have managed to do this track as a morning stroll as it only took a few hours.

Have tramped to Pararaha Valley four times since 1996 - hardest track of the area (experienced trampers only). Tramp up the river when in flood is a great experience (that took 7 hours instead of 2 hours), also going through swamp land to Whatipu. Have tramped some of the tracks at night - scary stuff!!

The beach is the best place of all as you are at the west coast. Can go 4WD along Muriwai Beach and a lot of fun, especially the Sand Dunes at the heads of Kaipara Harbour.

The heart of the Auckland Region, this includes the CBD and some outer areas towards to the other city districts.

Significant two volcanoes in this region, you are able to get a great view from the top of both of these. At Mt Eden you can climb down into the crater if you are daring. At One Tree hill, there is no longer 'the one tree' but has a monument.

The southern city district where the narrowest part of the North Island which is less than 3km wide.