For a 6 day tramp, we headed down to Nelson Lakes National Park.  I was joined by Tim F, Abigail and Chris L.  I last did this circuit in 2012 where it was done in reverse.

We flew down to Nelson on Jetstar flight JQ375, arrived mid afternoon.  We got our track transport Nelson Lakes Shuttles to pick us up directly from the airport and transport us to St Arnaud.  About 1.5 hours later we arrived and were dropped off at the General Store where we got our last supplies including Gas.  Once ready, we then headed down to Kerr Bay lakefront of Lake Rotoiti.

Meet up with our arranged water taxi who then took us across the lake to the jetty by Lakehead Hut.  This saved us about 3 hours of tramping.  We arrived at Lakehead hut about 6pm.  Cooked up dinner and then went to bed. 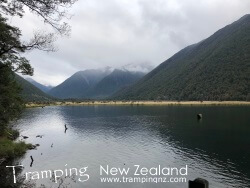 Today was our longest distance day and also our first real day on the track.  So we had breakfast and packed up ready to go.  We started to tramp across the flats of Travers Valley which was fairly easy.

We then got to a swing bridge which we crossed that took us across the river and stopped for an energy snack break.

Now we continued following the river upstream and had another energy snack break at the Hopeless Track junction, kept on going until we reached John Tait Hut.

Once at the hut we stopped for lunch for a bit.  After lunch we started going uphill as the valley narrowed.  We also stopped at Travers Falls to take some photos and another energy break.

Kept on going and crossing a few more bridges and eventually we reached Upper Travers Hut about 6pm.  Once we had caught our breath we cooked dinner, had a good chat with the hut warden and then went to bed.

Got up to a blue sky day with no clouds.  Had breakfast and packed up ready to go.  We continued to tramp up to the head of the valley where we had to go up and over Travers Saddle.  This was a steep climb up to 1781m, but we were coming up from the easier side which was only 600m. 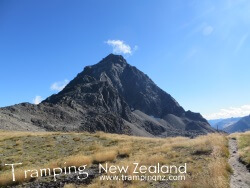 Once at the top we stopped for a break and admired the amazing view.  Now it was down the otherside with a decent of about 1200m.

We slowly took our time as it was quite steep.  The track then turned onto a spur where we had bush all of the way down (note the maps still have the track going down the valley).  We stopped to have lunch were it looked like the old and new tracks join.

After lunch we still continued downhill and crossed a couple of rivers.  The track was undulating all the way down to Sabine River.  Then it was flat all the way to West Sabine Hut were we arrived mid afternoon and we were the first ones to arrive there.

Since we had a bit of time, we all had a swim/bathe in the river to freshen ourselves up.  Had a lazy afternoon before having dinner and bed.  The hut was full to capacity (when compared to the last two nights).

Got up to another sunny day.  Today was a side trip for the day, so no big packs.  Packed our day packs with lunch and water.

We started heading up Sabine River to the Blue Lake.  This followed alongside the river and required a couple of river and avalanche path crossings.

After 3 hours we reached the Blue Lake.  This lake has the clearest water in the world, so you could only admire it since it is Tapu (sacred).  Had some lunch and rested for a bit. 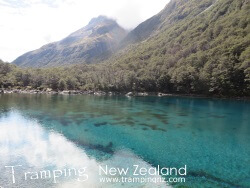 Then it was then back down hill all the way to the hut.  This was following the same path.

This was a full day.  Got back to the hut and went for a swim in the river.  Had dinner and then to bed.  Again the hut was full.

Another blue sky day, today we are heading down river to Sabine Hut.  So it was following alongside the river in the bush.  There were a few obsticles that we had to navigate over which made some mini challenges.

We stopped for lunch next to the river at a nice clearing.  Then we continued on were we got to a bridge crossing that has amazing clear water going underneath it.

Reached the hut by mid afternoon.  So we went for a swim in Lake Rotoroa.  Then had a lazy rest of the afternoon, had some dinner and went to bed.

Today started with straight steep uphill as we will be climbing higher than Travers Saddle.  So we took our time but we managed to go faster than our estimates of the number of vertical metres per hour.

Had an energy break at about the 2 hour mark and then continued uphill.  In some places it was steeper than others but was definatly climbing all the time.

Finally broke through the bush line, but still had to keep going up.  However it did start to cloud in a bit, but we managed to get in some amazing views.

Once on top of the ridge we stopped for lunch.  After lunch it was then following another ridge uphill to the highest point of the day.

From here you could see towards Travers Valley which where we were a couple of days ago.

Followed the ridge for a bit more before we had to drop down a little bit, climbing over rocks all the way to Angelus Hut.

Finally arrived at the hut mid afternoon and it is in the most amazing setting, especially with the sun out shining over Lake Angelus. 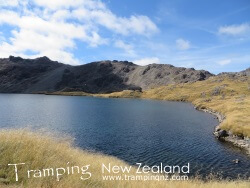 Most of us went for a swim in the lake (so this is the highest lake I have swim in), to refresh ourselves, which felt good.

For the rest of the afternoon we just relaxed.  Had dinner then we went and explored the lake edge by taking some photos before going to bed.

Today got up to a nice blue sky day.  Had some breakfast and packed our packs ready to go.  Not before doing some amazing photo shots of the area.

Once done we then headed uphill onto the ridge which will take us to the track end.

Once on top of the ridge above the hut, did some more photo taking and also noticing that we were way above the clouds.

We continued along the ridge and every now and then at certain points we stopped to admire the amazing views.

Some places along the ridge was a bit rocky but not as bad as the day before. 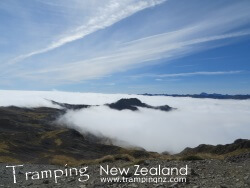 Now we were starting to head downhill along the ridge, which took us through the cloud layer, noticed a slight temperature drop and a bit of wind.  Kept on going until we reached Relax Shelter.

At the shelter we stopped and had lunch.  Also we were running ahead of time for our track transport pickup, so we had a bit of time to spare (a good couple of hours), so we just relaxed.

After relaxing we decided that we better get going, so it was then all downhill to the track end.  While going down the track there were good views of St Arnaud.

About an hour later we reached the track end.  We waited for a bit for our track transport to arrive which took us back to Nelson.

Got dropped off at Tasman Bay Backpackers we were staying at, had a shower to clean ourselves up.  We waited for the chocolate pudding and ice cream that they serve to everyone that stays there before we headed out to get dinner in town.  Once had dinner, walked back to accommodation and went to bed.

Today we had a small sleep in.  Packed up pack and checked out of accommodation.  Left pack in luggage storage.  We all then went down the road to the Nelson markets.

We explored the markets and had some food to eat.  Afterwards we walked around town for a bit before heading to the airport.

However for most of us we got a notification from Jetstar saying that our flight back to Auckland has been cancelled.  So we spent a bit of time getting a new flight sorted, which we got onto the flight for same time tomorrow.  We then organised some new accommodation over some ice cream.

We checked into new accommodation and then we went round to collect bags from storage and bring back.  We relaxed for the rest of the afternoon.  Went out for dinner in town and then bed.

Today we had another sleep in.  Packed up pack and checked out of accommodation.  Left pack in luggage storage.  We went to have breakfast down the road.

After breakfast we toured the Nelson Museum.  This was interesting as it has all about the history of the area and an exhibition on dinosaurs.  Afterwards we all split up and did our own things, I walked around town.

We all then picked up our packs and then caught the Supershuttle to the airport.  Flew on Jetstar flight JQ376 back to Auckland one day later than planned.  Great trip.