For the annual (well we didn't do one last year for some reason) week long tramp, we headed down to Nelson Lakes National Park. I was joined by Angus, Alistair, Trevor, Chris M and Rosie.

Note: We have done the Travers-Sabine Circuit in reverse.

We flew down to Nelson on Air New Zealand Flight 8375, leaving at 8.15am.  Arrived in Nelson at 9.40am.  We had arranged Peter from Nelson Lakes Shuttles to transport us to St Arnaud.

It took about 1 1/2 hours to get to St Arnaud where we were dropped off at our accommodation which happens to be straight across the road from DOC visitor centre.

So we were getting a bit hungry because it was lunch time, so it was time to scout out St Arnaud.  In our quest we found the one and only general store where we brought lunch.  Just to note that the fish and chip shop next door is only open on a Friday & Saturday.

We relaxed at the batch for the rest of the afternoon and took at stroll down to Lake Rotoiti for some scenic photo taking.

We cooked up dinner from ingredients sourced from the general store and then played card games before heading to bed.

Woke up to a stunning sunny day, which had been forecasted for our whole trip.  We got ourselves and packs prepared.  Then the weigh-in, where we noted down everyone’s pack weight, where on our return we will see who lost the most.  Just before 10am we headed over to DOC visitor centre to be picked up by Nelson Lakes Shuttles to the start of the track on Mt Robert.

The view from the start of the track was amazing looking down to St Arnaud.  If this is anything to go by I’m liking this tramp already.  We headed through the bush where we follow the river valley (Speargrass Creek) up to Speargrass Hut.

Once at the hut we had lunch, then we relaxed in the sun and played card games for the rest of the afternoon. 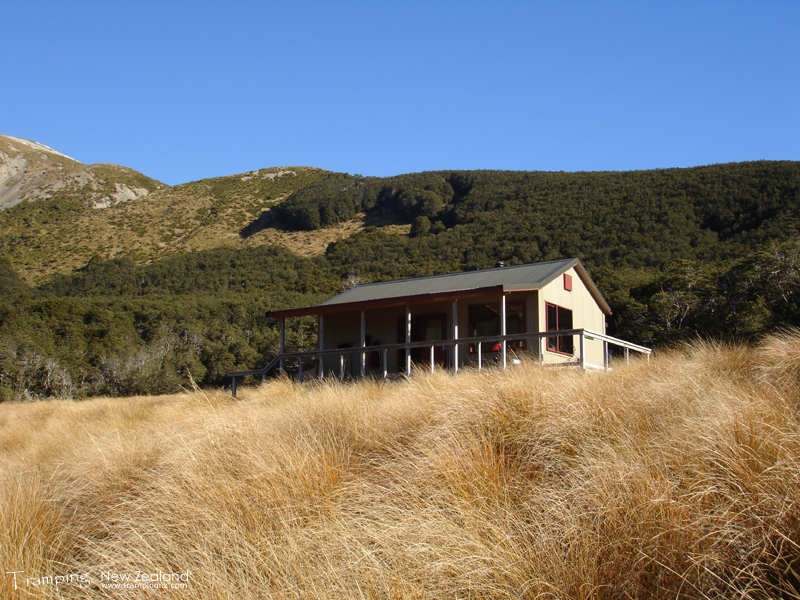 We woke up to a frosty morning, where we have 5 hours ahead of us today.  So a lot of it is in bush.  Firstly we headed up hill were we headed in and out of several valleys.

At one point where there was quite a bit of boardwalk protecting the area.  This lead to good views where we took opportunities to take some photos.  From here it was downhill to the hut.

For lunch we stopped by a tarn which was located off the track, where we enjoyed the sun to warm ourselves up.

After all of the downhill we came out to Lake Rotoroa which the water was glass-like where the reflections mirrored the mountains, very beautiful.

Arrived at the hut early afternoon where we played card games. 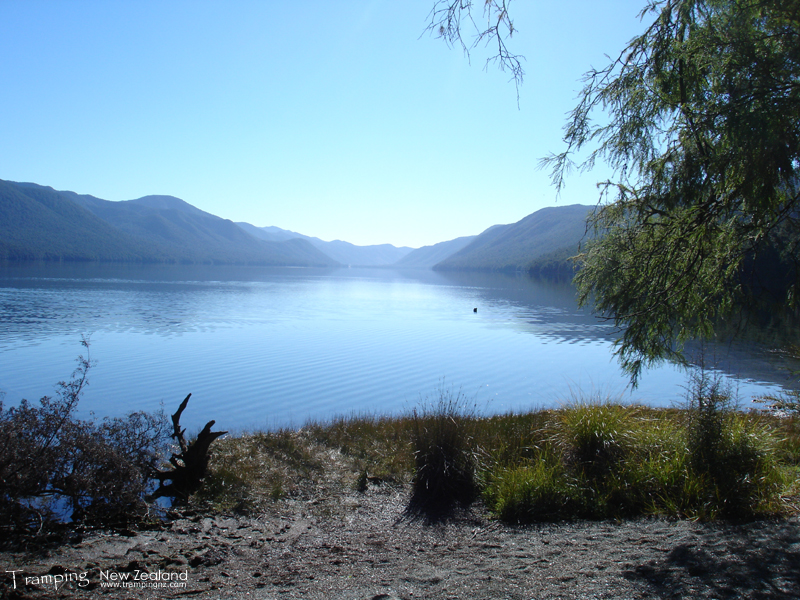 Today is another day where we follow a river valley (Sabine River) with a mixture alongside the river (mostly) and in the bush.

One thing that was noticed to date and to continue for the rest of the trip is that the water is so clear that you always could see the bottom no matter how deep.

As we were going alongside the river the landscape was changing which kept impressing us more and more.

Eventually we got not to far away from the hut and due to the swing bridge being washed out for quite a while, the final river crossing of the day, involved going along a fallen tree that spans the river.  This presented a challenge to some of us but we all made it across safely.

Finally got to the hut and noticed that the fireplace was different to the previous huts to date.  It was a lot smaller, but it gave out some amazing heat.

Today happens to be my birthday and it is the “big” day (a full 7 hours +) – crossing Travers Saddle.  So this involved getting up early (while it was still dark) because it could be possible that we may not get to the next hut until dark (trying to maximise the amount of daylight hours available).

The direction of the circuit we took was dependent on this day.  As a group we prefer to go uphill rather than downhill.  To this meant we tackled the difficult side going up.  The vertical height distance we had to cover today was 1,117m uphill.

First of all it involved going through bush and climbing up near vertical in places.  Crossing quite a lot of avalanche paths which were marked by signs.  Through the bush we gained quite a lot of height.  Somehow Rosie managed to receive 3 bee stings on the same leg at different times, which was strange because none of else in the group saw any bees.

At one point we crossed a chasm (bridged) where you could see water rushing through it below.  I’ve never seen anything like it before and any photo’s or videos just does not give it any justice, you had to be there.

Just as we broke through the bush line (1000m) we had a morning tea break.  At this time it was noticed that the temperature was dropping, so it was a quick stop to catch a breather.

This is where the hard part started.  Heading straight up the mountain towards Travers Saddle.  This involved going over lots of loose rocks at more than a 45 degree angle.  This took a good couple of hours, which meant we did not cover much distance as it was all height.

Nearly there, at 1500m we had lunch while we admired the view of where we came from.  Some mean feat but not there yet.  After lunch we continued on which took another hour to get to the top of the saddle. 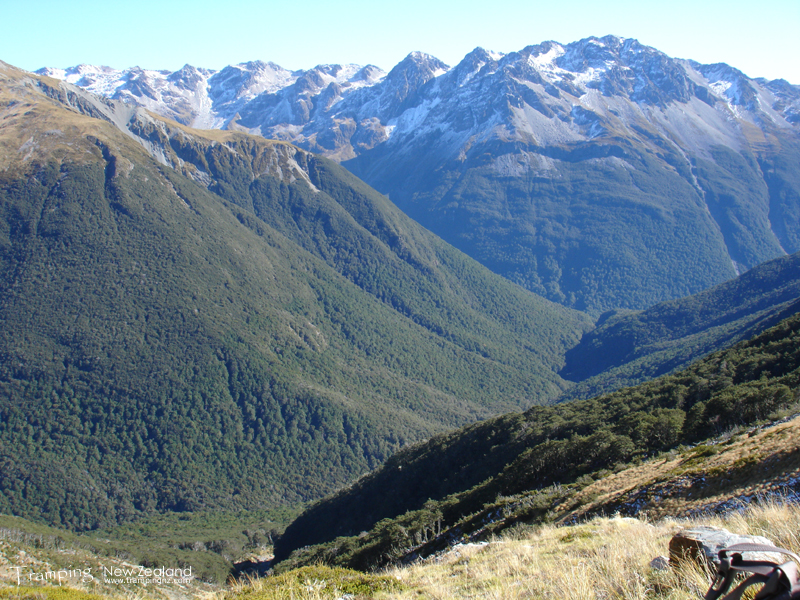 The view while having lunch | Photo Credit: Chris Foster

Now it was downhill on the other side.  Had to carefully climb over rocks as an extra challenge of snow and ice was presented to us.  Chris & Rosie had some mini-crampons which made the task getting down a little easier.  For the rest of us it was a matter of taking it slowly.

Finally reaching the bottom of the river valley (Travers River) where headed down to the hut which was another hour away.  It was rewarding to finally getting to the hut after a long hard day.

That night we toasted marshmallows on the fire and admired the night sky.

It was another early morning because we had a huge distance to cover.  This involved following the river down.  Crossed the river a couple of times and over rocks, some were slippery due to black ice.

We stopped at Travers Falls and admired the wonderful force of water, which was huge.

Continued motoring down to John Tait hut where we had morning tea/lunch before continuing on to Lakehead Hut.

The pace that we had set earlier in the day had us cover a great distance with good timings was starting to run out of steam.  Mainly due to when we got down to the flood plain, which seemed to go on and on.  The sun was beating down on us and we were getting hot for the first time on the tramp (due to wearing gloves & jumpers in the alpine environment). 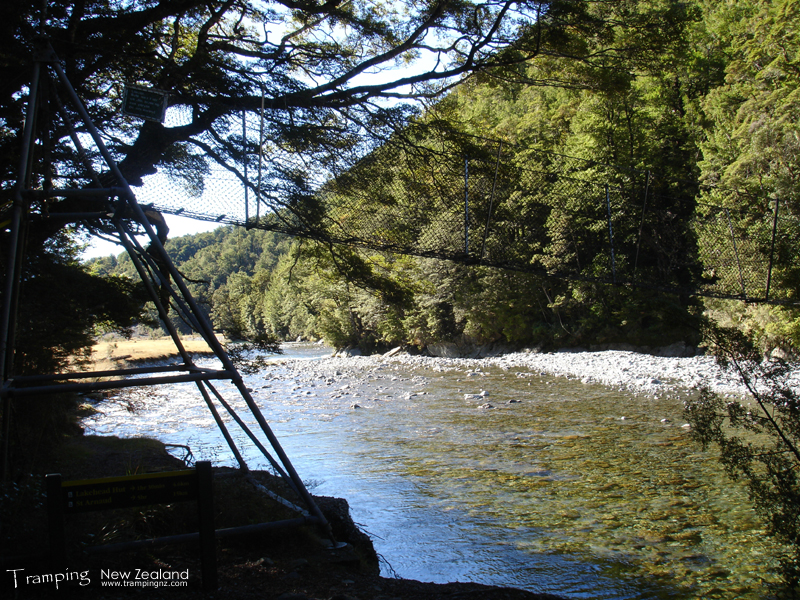 We came across some patches where frost still existed at 2.30 – 3pm in the afternoon which we found fascinating.

Eventually we made it to the hut as the sun disappeared behind the mountain at 3.30pm.

A very heavy frost this morning, it has to be the coldest morning experienced so far (must have been in the minuses).  It is back to St Arnaud.

Along the way we took some very scenic photo shots.  Just over a good couple of hours we completed the circuit.

We head back to the batch we are staying at, where we had lunch and rested for the rest of the afternoon.

Our final day in the South Island, the weather started to turn so we considered ourselves lucky that we had great sunny weather throughout.  We packed and cleaned up the batch.

Our Nelson Lakes Shuttle took us back to Nelson, via the Airport (where we checked in our packs, so we did not have to carry them round town).

We had lunch and then walked round town for the afternoon before being picked up and taken back to the airport.  Finally we then flew back to Auckland where we were welcomed to rain (typical).