In early December I had a chance to check out the Abel Tasman Coast Track in the beautiful Abel Tasman National Park near Nelson. In December every year I try to do a week long tramp in the New Zealand outdoors, normally joined by Jaime, Ryan, Alistair, Angus & Trevor.

Since we live in Auckland, we flew down to Nelson on Air New Zealand Flight 8373, leaving at 6.50am (very early start). Airplane arrived in Nelson at 8.10am, it was a rubber-band propeller plane. When coming in for landing we saw the Abel Tasman National Park in clear view - it was a sunny day in Nelson.

Upon arriving we waited for our 'K' bus to take us to Marahau where we start the tramp. After about an hour on the bus we arrived at Marahau. Marahau has a very good general store which stocks a few tramping items including gas (we could not take this on the plane - that's another story). Also at Marahau we purchased camping passes which cost $7 per night.

Approx. 11am we started our journey of the 51km trip of which we will cover 22km today. For the next 2 days this is the highway part of the track, this is due to being the popular part that is operated by tourism operators. The track was in a good condition, wide and an easy gradient. I liked the fact that the track stayed at a constant height (not going up and down at every bay), this was pleasing to me due to the amount of ground that we had to cover today.

Our first major stop was at Appletree Bay for lunch. Here we sat on the rocks and had lunch while kayakers paddled past. We were here for about 1/2 - 1 hour. However we had to continue on due to the tides.

Much of the tramp had to be planned around the tides because we had to walk across a couple of estuaries. Most of the estuaries had high water routes but the consequence was adding extra km's.

We bypassed Anchorage, a nice view of Anchorage was found before we headed down to Torrent Bay estuary. Walked along Torrent Bay (last time I was here was the year before in a kayak) which took about 20 minutes (saving 45 minutes from high water route). Had another rest at Torrent Bay - there is quite a bit of private property here. At the time we went through a house was being built and a digger was in operation. 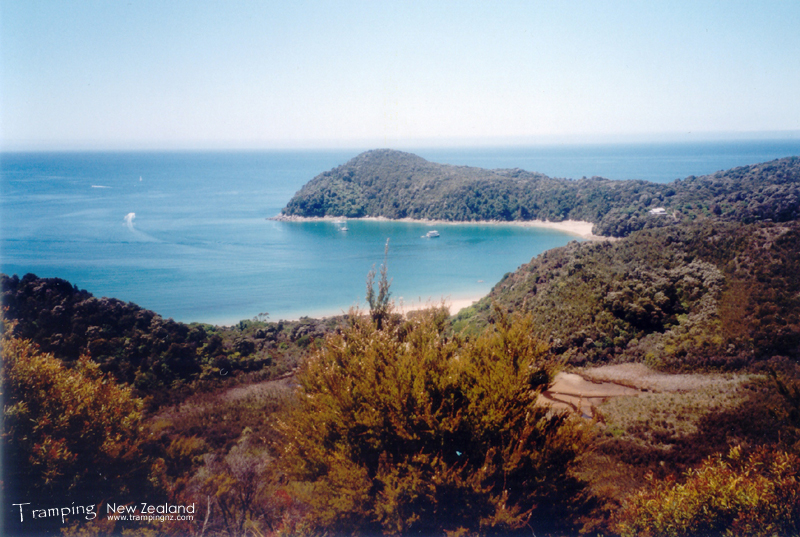 From here headed up a hill and walked past several bays. At Sandfly Bay we had to cross a big swing bridge. From here we were about an hour from our camp site for the night at South Head (10 minutes before Bark Bay).

Once we arrived, we had a rest, setup camp and had dinner. Since it does not get dark until 10pm, we were up until then (talk about a long day).

During the night, we head a possum getting caught in a trap. It was an unusual sound which never heard before. The DOC ranger showed the catch, it looked like to possum was posing. Today we had a 14km tramp, which meant we had to get away early to allow us to have some time for possible side trips. A quick walk to Bark Bay to collect some fresh drinking water (that did not need to be treated first). Due to the tide being in, had to go around the high tide route which took about 20 minutes.

From here there was a big hill climb which broke us into a sweat. Once got to the top of the hill, we had a rest to catch our breath. Now we started heading to Tonga Bay, this was of an easy grade. Did you know that the stone of the government buildings came from the Tonga Quarry? Continued onto Onetahuti Beach, which we had to walk along. A lot a kayakers / day walkers were dropped off by water taxi here.

Our next heading was Awaora Lodge & Cafe - in the middle of nowhere? (privately owned). A walk up the valley through a wide track that could be fit for a 4x4 farm bike, the grade was relatively easy. Once we get to a junction to Awaora Lodge a sign says that the Cafe was closed for refurbishment - this put our hopes down for some luxury. However we went by the lodge, following the yellow sunflowers next to the airstrip, we pressed onto Awaora Hut for lunch.

We were at Awaora Hut for a good 2 hours, during this time we had a rest, lunch and blister spotting on our feet. Several of us had some blisters (I had a huge one), so surgery had to take place. Before setting off again filled up our drink bottles of drinking water and then we headed to cross Awaora Inlet. The crossing of the inlet took a good 20 minutes. 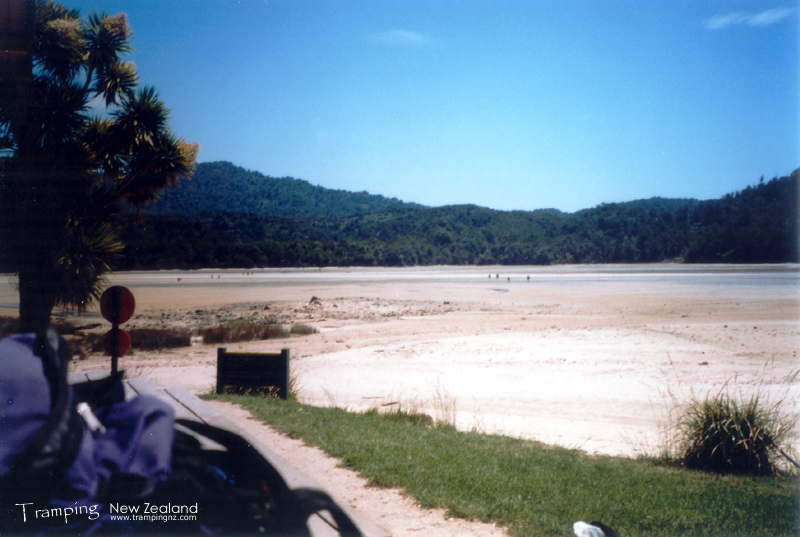 It was estimated that our camp site for the night at Waiharakeke Bay will be about 30 minutes away. This took 15 minutes longer than anticipated. Since we had most of the afternoon left we decided to play on the beach. We made a dam on the stream that came out at the beach. This is where I got sunburnt feet and lower part of my legs. The dam that was built was massive and held back a massive amount of water. Had dinner and the water was still backing up. A half hour call was made and passed with the dam failing to burst, so at this point in time we made bets. Chris's bet of 20 minutes was the winner with the dam bursting at the 21st minute. This was spectacular to watch.

Woke up to a day of rain, started about 4am and no sign of it letting up. This will be our first tramp ever to have a raining day. We packed up quickly and headed off to Totaranui which is about 1 hour away. With no breakfast in our stomachs, this made us hungry to get to Totaranui for brunch. This was a nice walk going along the top of the cliffs. The feelings of this solitude were great.

Upon arriving at Totaranui the rain stopped which allowed us to have brunch. After an hour break, we headed off again and the rain closed in. There was basically no one on the track for the rest of the day. Walking through native bush which looked nice when wet. So we pressed onto Anapai Bay, we stopped for a small while.

Our next conquest was getting to Anatakapau Bay for lunch. This was a quick 45 minute walk. I tell you I was hungry. The rain had reduced to a fine mist, this allowed us to have a break for lunch. From here we could see Separation Point. Also at this point it was decided if I walk directly to our camp site or go via Separation Point. The sunburn on my feet was causing a problem, not the blisters. As Separation Point did not look to far away, I decided to go for it. 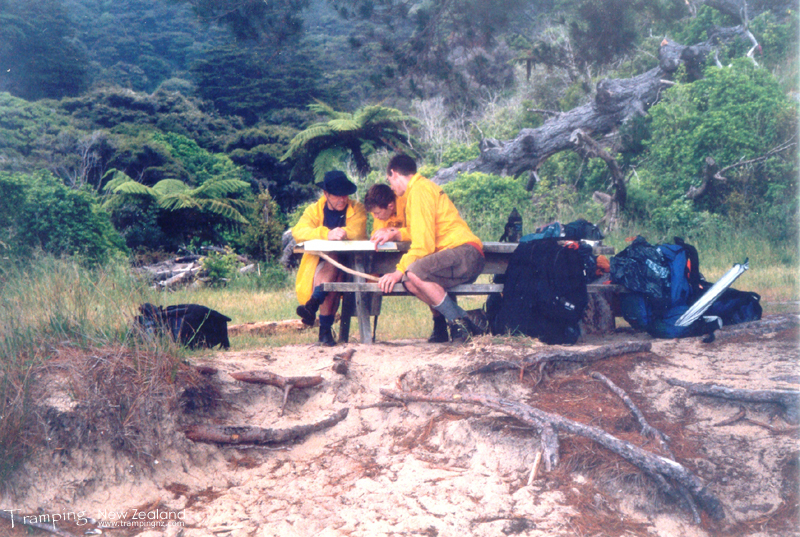 Separation Point was an experience not to miss. It was windy, raining and blasting into your face, it was great. Saw the light house which is small and operated by solar power. Now we had to walk to the next camp site. The rain is pouring again and getting us totally wet as we walked along the ridge which overlooks Mutton Cove - nice view with the cloud (was really up there). Now coming down off the ridge was very exposed.

We were lucky at the camp site was next to the Whariwharangi Hut. This is where we got dried off in-front of the fire. By the late evening the rain stopped and the tent was setup. As the ground was still wet, we left our packs in the hut (just took our sleeping bags into the tent).

Woke up to a fine sunny day. This was our day of tramping out to civilisation. Dried the tent and packed up to go. Only 5.5km's today - that's about 1 1/2 hours. This was a relatively easy walk out due to the easy gradient (up through a valley). When we got to the end we basically rested, eating the rest of our food until the bus arrived. The bus trip today is about 2 - 3 hours long back to Nelson where we stayed at Paridiso Backpackers.

Arrived back in Nelson, basically resting in the sun at the pool side at the backpackers. For dinner we went to the local fish & chip shop. After this we walked around the Nelson city centre. Then we relaxed for the remaining of the evening.

Today is the last day of our trip. It was a nice sunny morning. Went into the city centre and checked out some of the shops. Had morning tea outside at a cafe. Then returned back to the backpackers to pack-up. Got a shuttle bus to the airport and boarded the plane for Auckland (Flight 8384) at 2.30pm.

Arrived back in Auckland, it was raining. We all managed to fit into Trevor's land rover. Got home about 6pm after getting through the traffic. It was a very enjoyable trip.