For the between Xmas-New Year tramp, we headed down to Whirinaki Forest Park. I was joined by Vanessa, Chris S, Staci, Bradley, Cameron, Hamish, Natalie, Abigail and Tim.

We left Auckland at 6.30am to head down to Te Whaiti.  Stopped at Matamata for 2nd breakfast and then onto Rotorua where we visited the iSite/DOC for those that required hut tickets.

We all arrived where the cars to be secure parked and pickup track transport, so we all got changed, sorted out the group gear and loaded up our packs.  At about 12.30pm we were then transported to Okahu Road-End for the start of the tramp.  Got dropped off and set our course for Rogers Hut which is 3.5 hours away.  We decided to have lunch a little later further up the track.

After about half hour of uphill, we stopped and waited for the slow ones to catch up, we then decided to have some lunch.  We all then continued onto Skips Hut, where we had a break.  Most of us were still feeling good, so we continued onto Rogers Hut, which was a lot easier, of just following the river.

Arrived at Rogers hut (couldn't miss it due to being bright orange) and all of the group food got unloaded, which looked liked that we had a lot of food.  However it was time to cook some dinner and relax for the evening.  Due to being a 6 bed hut, 4 of us decided to go on the floor (we had bed rolls), as we knew that everyone was going to get a turn on being on the floor (or tent) during the trip. 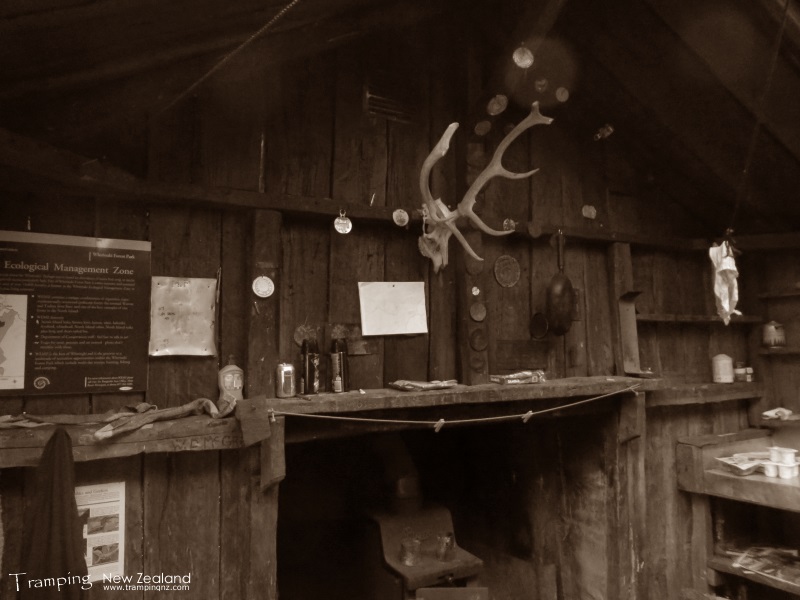 Today is a relative easy and long day of following the river for most of the day but with a saddle in the middle to get over.  We had breakfast and packed ready to go by 8.30am.

Followed the river with a gentil uphill gradient.  After a short while we came across a campsite, it looked pretty flash, with an area for helicopter landing, hot/cold showers with boiler and a flush toilet, so we had a quick break before continuing on.

We stopped for lunch at Mangakahika Hut which is the halfway point for the day.  After lunch we tackled the big hill, which the slower people struggled with, but was well worth it as it was downhill from there onwards to the hut.  There was a bit of a zig-zag on the other side as the terrain was a bit stepper.  Once in the valley, came across a hunters campsite (grass clearing), we continued on until we came across a deer exclusion fenced off area (which used to be the opposite way round back in the early days).

Once we got to the hut, some of us went down to the river and had a quick dip/swim in the cold river water before dinner.  Due to prevalant of rats in/around the hut, we had to hang our food up either in dri-bags or tied up the big surival bags handing from the rafters in the hut.

After dinner we consulted as a group, the current situation of the trip, as we had some people factors that needed considering on as we either continue as planned (as the next few days would be harder) or we split the group into two going different directions or change intended route to suit the whole group.  We eneded up deciding on changing the intended route to suit the whole group, however still exit as planned at River Road, it meant that we were having to back track the last 1 ¼ days.

We then played card games before heading off to bed.

Got up, had breakfast before packing up and heading back the way we came.  Today is now the shortest day, which hopefully help some of the people factors that we are being affected by, so therefore heading to Mangakahika Hut.

We stopped at the hunters campsite for morning tea break before tackling the big hill again, by going up the zig-zag track.  A few of us decided to motor uphill and then wait for the slower ones.  We stopped at the top for lunch.  It was then all downhill to the hut, which we arrived early afternoon.

For the afternoon we relaxed, went down to the river and had a dip/swim.  While we were there we decided to build a dam so we could have a bit of a pool, which was quite successful and fun, but the water was still cold.  Dried off back at the hut in the sun, getting a bit of a tan.  Collected some wood to have a bit of a campfire later on (there was a campfire circle).

Had dinner, then we got the fire going which all of us surrounded and enjoyed until it was dark. 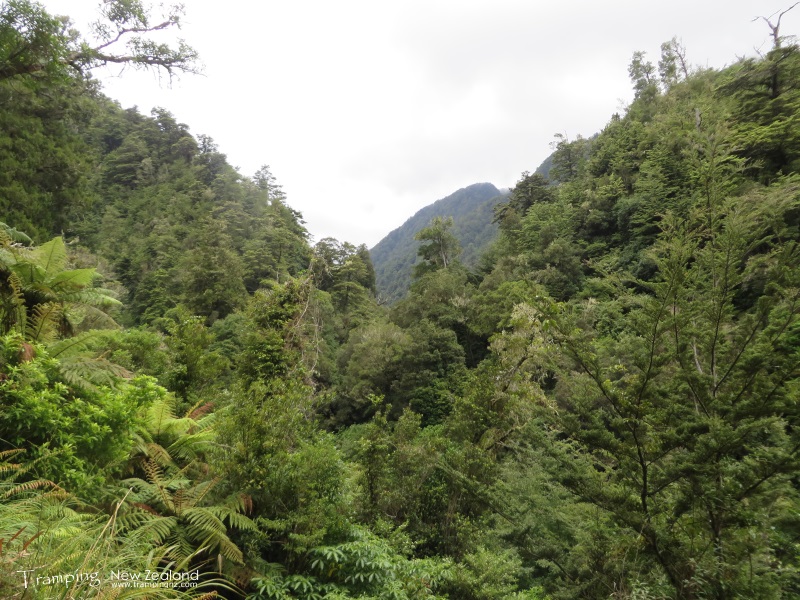 Another cracker day, we packed up and then headed off to Rogers Hut.  This was slightly easier as we were still going down/along the valley, however due to people factors it was still slow going.  Stopped at the flash campsite and decided to use the facilities of the flush toilet, just to be a bit fancy and it is not something you get to experience a lot while tramping.

Had lunch at Rogers Hut (end of the back tracking) and then we pressed onto Moerangi Hut.  The track is mountain bike standard, so it is quite easy, however most of it is benched with some up and down.  Had to be a bit careful as you could easily go off the edge in places, there were warning markers for the mountain bikers to indicate this.  In places it was quite exposed to the hot sun or we were under the cover of trees but still hot.

Eventually we reach the hut, which had a very sunny position.  So again went down to the river for a quick cold dip/swim before getting dinner on.  We again had another campfire which we enjoyed into the evening, however on a much smaller scale.  Due to prevalant of rats around the hut, we again had to hang up whats left of our food in the rafters.

Its New Years Eve! and we got up at 5.30am, ready to leave at 6.00am.  This would give us 6 hours to get to the end of the track for our transport pickup, as we were giving ourselves a buffer of extra time due to people factors.

Headed back to the main track (passed a family of Whio/Blue ducks in the river) and then it was uphill to get up and over the saddle.  The track goes up quite a gental rate over quite a distance, so it is not difficult, since it is still a mountain bike track standard.  There was a bit of cloud cover, which kept it quite cool until we got to the top.  At the top of the saddle, it was like that you were in the clouds, the temperature dropped, so we pushed on.

One thing that was noticeable during the whole trip so far was the presence of Kaka parrots, which are an endangered species, they make a noticeable call and they were always flying around up high.

From this point it was mostly down hill with a little bit of up and down at the end.  Finally we arrived at "Te Whaiti Nui A Toi Canyon" where we stopped and looked to admire the beauty of the area (which was also one of the scenes from Intrepid NZ TV program, about early explorers/adventurers that aired recently).  Now we have reached the end of the track, with a bit of time to spare before our track transport arrived, which we were surprised by juding on the speed that we had been going on this tramp. 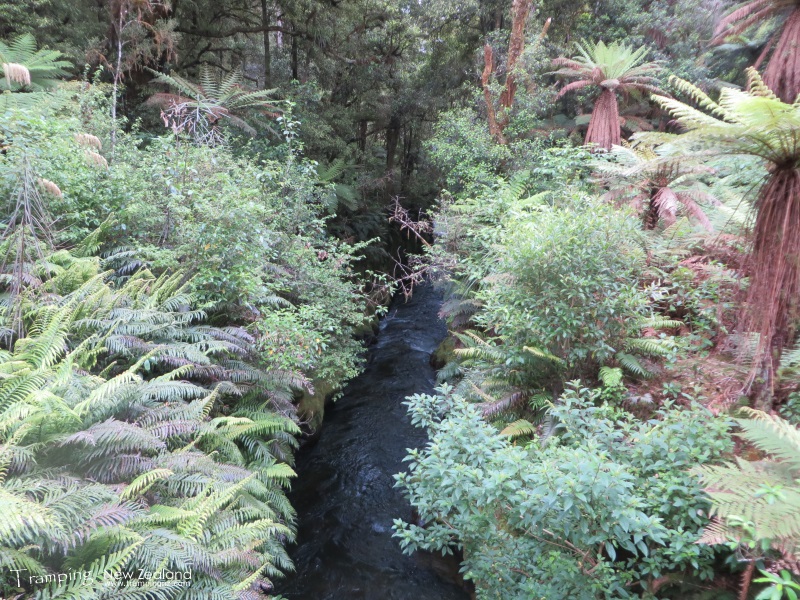 We were picked up by the track transport at 12.00pm, which took us back to where we parked the vehicles.  Unpacked the group gear, loaded up the cars and headed to Rotorua, stopped at Burger King for lunch before driving back to Auckland via Matamata & Pokeno, arriving about 6.00pm.  Now off to celebrate New Years.

This was a good trip deprite the people factors that we encountered, which was not expected.  However will need to add this trip (being a full circuit) back onto the list of needing completing next time.