For Queens Birthday weekend (under level 2 COVID-19 restrictions), we headed down to Egmont National Park. I was joined by Nathalie, Kirsty and Tim S.

The three of us left Auckland at 7.30am to head down to Inglewood which is a 5 hour drive.  It was a nice drive down, where it was foggy in the Waikato and also went along the new part of Waikato Expressway that bypasses Huntly that recently opened.

We stopped in Inglewood and had some lunch at Subway.  Soon we were heading up to North Egmont Visitor Centre.  Once arrived we sorted out our hut passes/tickets and our packs before heading to Holly Hut.

To start off with we headed up the Razorback which was a bit of a climb before leveling out going in and out of the valleys along the mountain.  Due to the fine weather we had some awesome views.  We had a few photo stops along the way before we headed down to Holly Hut which was overlooking Ahukawakawa Swamp.  As darkness started setting in we had to get our headlamps out not far from the hut, some 3.5 hours later we arrived at the hut and managed to get a bed (we were carrying tents also to ensure that we were complying with COVID-19 social distancing rules if needed).

We cooked up dinner and then played Monopoly with a couple of other people it the hut, it was a lot of fun and cheating going on.  Then we headed to bed.

This morning we got up and had worked out that most people were exiting today due to the impending weather, so there was no rush to get to Pouakai Hut.

Took it lazy and decided to go for a side trip to Bells Falls to take a look at the waterfall.  This took about 1/2 hour to get to and was a great sight.  Some of us decided to go for a dip in the cold water.  On the way back to the hut Tim, our fourth member turned up. 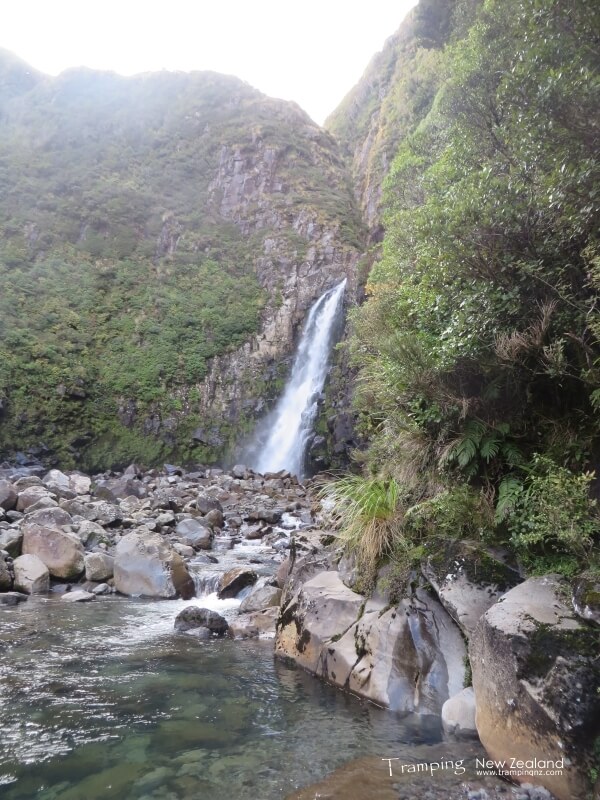 The weather was another nice sunny day.  We headed down to the swamp and crossing it, which gave us awesome views of Mt Egmont/Taranaki.  Stopped at the bridge so Tim could have a dip in the stream.  Then it was uphill to get onto a ridge, which was a bit of a climb.

Once on the ridge and at the intersection with a track detour to Pouakai Trig, we left our packs and headed up.  At the top there was amazing views in all directions, you could even see Mt Ruapehu in the distance.  Once back down we collected our packs and continued on to Pouakai Hut, which we reached in the early afternoon and had a late lunch. 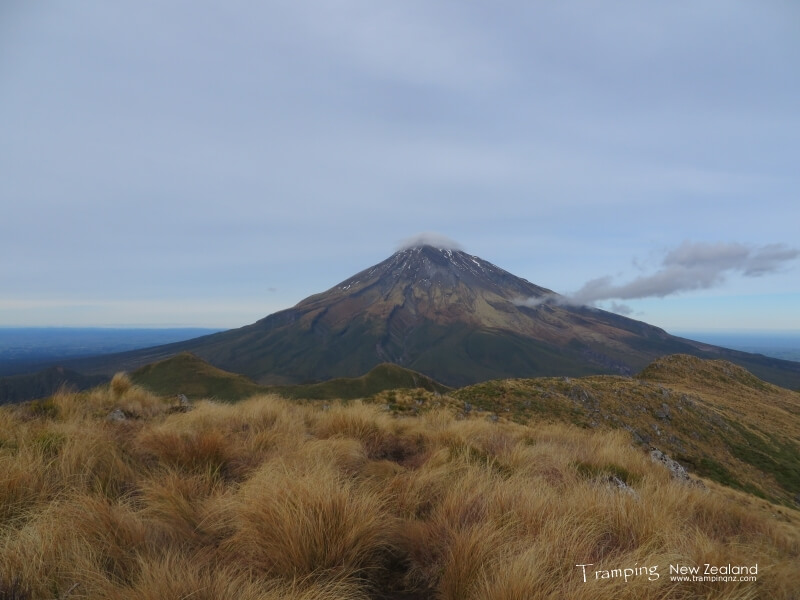 While having lunch we discovered that there was a recent earthquake nearby, however none of us felt it.  After a bit of chillout time we decided to go down to Pouakai Tarn for scenic photo taking.  Putting some warm clothes on we headed to the Tarn about 15 mins away.  We were there for a while to see if we could get a nice reflection photo, however it had started to cloud in.  So we headed back to the hut.  When back at the hut we managed to capture some sunset photos.

Because we had a late lunch, we were not ready for dinner, so we played some card games.  After a while we noticed that a group of people had not returned from the Tarn, they were not well dressed for the conditions so we decided to go and check on them as it was getting quite cold.  Luckly they were on their way back to hut when we met up with them, with a couple of them cold.  So we brought them back to the hut to warm up.  We then had dinner and played more card games before going to bed.

Today we had 6.5 hours of tramping in front of us and 5 hours of driving back to Auckland.  The weather was starting to close in, so we decided to get going with full wet weather gear on.  As we headed from the hut, we were now exposed to the elements of the wind and rain as we headed along to Maude Peak.  Next we had to tackle the climb up Henry Peak, pretty much straight up including ladders, which is the highest point of the day.  We stopped at the top for a quick photo before continuing on.  It was now all downhill to Kaiauai Shelter, this was not easy, quite a lot of it was board walk / steps before we got under the forest canopy, where we where sheltered from the weather.

At the shelter we had an early lunch in the dry before continuing on.  As we were heading in and out of the valleys, when we got to an exposed area, it is only then we knew it was still raining quite heavily.

Finally we reached North Egmont Visitor Centre just after 2.45pm.  So we got changed and started to drive back to Auckland.  Unfortunatly we got cought in the traffic in Awakino Gorge/Tunnel, which took us about 1 hour 45 mins to get through this small section.  Because we were quite hungry we stopped off in Otorohanga for some dinner.  Then continued our way back to Auckland.  We all had a great weekend.