For a winter tramp, we headed down to one of my favourite places in the country – Tongariro National Park. I was joined by Vanessa, Staci, Chris S and Chris R.

Note: Due to the amount of snow and avalanche warnings (especially around Red Crater) we deviated from our original intention of the full circuit - Whakapapa Village/Mangatepopo Road-End, Mangatepopo Hut, Oturere Hut, Waihonou Hut, Whakapapa Village.

We left Auckland in two groups, one at 7.30am and the other at 2.30pm to head down to Whakapapa Village, this was due to work committments for the second group.  The first group arrived at Whakapapa Village and visited the DOC visitor centre for those that required hut tickets and then got all set to head to Mangatepopo Hut.  However due to the weather and not taking the correct track, the first group later back-tracked to Whakapapa Village and then drove round to Mangatepopo Road-End (where group two is going to start from) then walked in to the hut.

The second group arrived at Mangatepopo Road-End in the dark, then we got changed, packed up and headed to Mangatepopo Hut.  Finally underway, the track was covered in snow, with quite a bit of water running below our feet, so had to be careful of not falling over.  Made it to the hut about 9.30pm after a 40 minute tramp in.  When arrive the first group had made the second group 2nd dinner before going to bed. 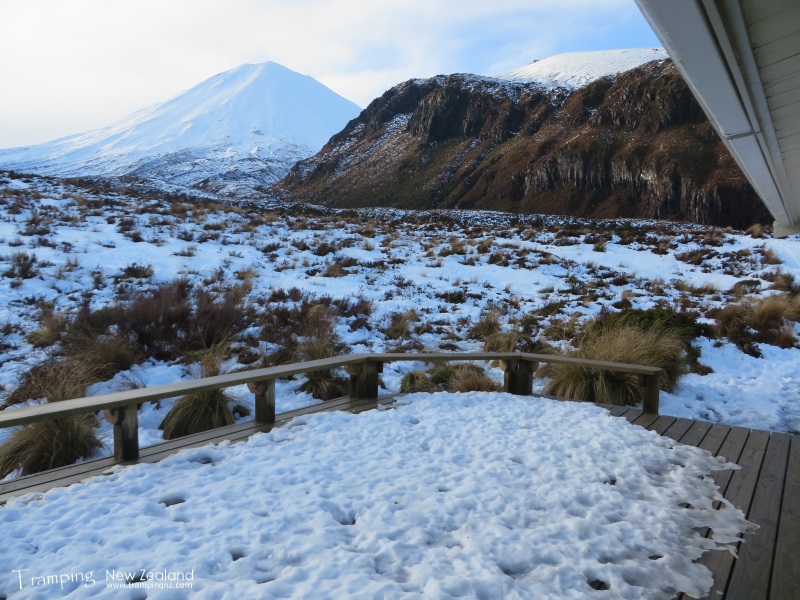 Since I was in the second group arriving in darkness, this morning is the first time I saw the amount of snow that was around in daylight, it was like a dream come true.

However it was decided as a group from the amount of snow and avalanche warnings, that we would not be going up and over Red Crater, as intended as it is too much of a risk.  So a new plan was devised with alternative routes for the rest of the trip, that allowed us to do at least some of the tongariro northern circuit.  We had breakfast and packed up to head back to Mangatepopo Road-end to where the cars were parked.  Tramping back to the cars was easier as the water on the track had drained away and it was just snow, noticed that some cloud had started to roll in.

Once back at the cars, they were loaded up and we then headed to the Desert Road, where we are going to re-enter on Waihonou Track.  So we parked up the cars, re-packed our packs with the rest of supplies and eating a quick snack, then we were off.  This track had a bit of snow on it and it took us about 2 hours to reach Waihonou Hut.

We sorted out our sleeping quarters for the night, then we had lunch in front of the big windows looking out to the snow.  We then partially prepared dinner before we headed out for an afternoon excursion to the old historic Waihonou hut.  We decided to try out and practice our crampons and ice axe skills on the way to prepare ourselves for tomorrow.  This was the first time that I have visited the old hut as it is off the main track, it was very interesting to see the history and its artifacts.  Then we returned back to the hut as the sun was setting. 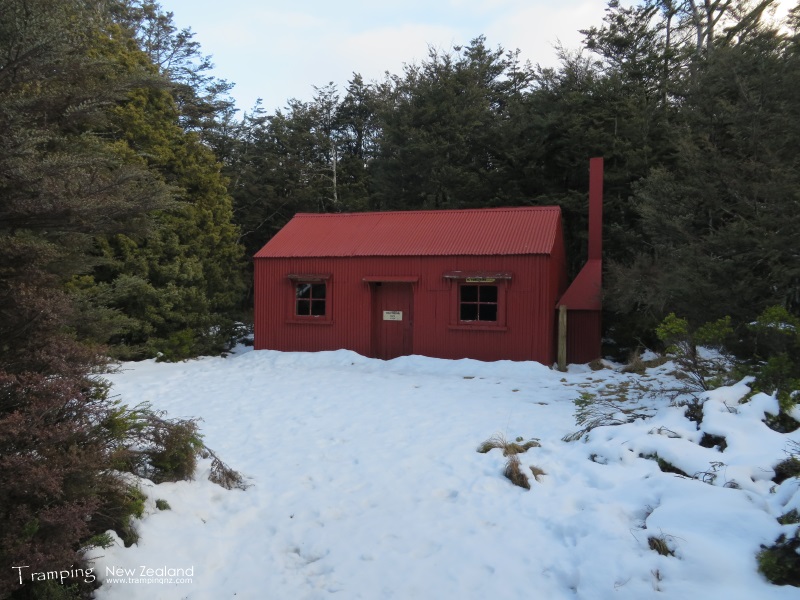 Once back at the hut we cooked and ate dinner.  Due to lack of water in the water tanks all the water needed was melted from snow that was collected around the hut.  We played a couple of card games before heading to bed as we have a big challenging day tomorrow.

Got up at a respectable time and had breakfast.  Packed our packs and left the hut just after 9am prepared with crampons on and a day in snow.  Today we are tramping to Oturere Hut which crosses a few valleys.  First of all it was into the bush and up and over a ridge.  This is where we noticed how much snow there really was and how much real work/energy was required to get through it.  Had an energy break not that long in, before we crest the ridge.  This is now we had to be careful as from time to time you would fall/sink through the snow, in most cases it got up to your knees but there was the odd occasion where it got up to your crouch.

Up and over the ridge and down through the bush down to the bottom, this is where we stopped for lunch next to the bridge crossing a river.  It was amazing that it took us a couple of hours to get to this point as we had only done about 2km.  After lunch we climbed up onto a barren ridge which we then followed until we crossed to the next valley.  We came across a small bowl full of snow, so we decided to have some fun by sliding in the snow.

We continued on and we finally made it to the hut after a hard ascent up the last valley, by this time we were quite tired climbing through the snow for 6 hours.  Upon arriving at the hut we put on the fire and discovered that it had not been visited for quite a while (about 3 weeks).  So while we still had our boots on, we made a track to the long drops as it was non-existant.  This proved a bit of a challenge as you kept falling through the snow up to your crouch, after a bit of work, a track was made that is usable, so we all went and used the facilities.  After this we headed into the hut, got changed, hung up clothes to dry and started preparing dinner.

We had dinner by candle light and then we went to bed early as we were all tired from ploughing through the snow all day.

After a 12 hour sleep, got up to a nice sunny day where we had nice views of Mt Ruapehu and Mt Ngauruhoe.  We packed up, admired the wonderful snow views and then headed back to Waihonou Hut.  It was a bit easier this time round as we were following our own tracks from yesterday and the general vertical direction was downhill.  Again we played in the snow along the way and also had lunch in the same place as yesterday.  Finally we made it back to Waihonou Hut, where we had a bit of a pit stop.  The snow around the hut had melted quite a bit, so we were quite surprised.  We also investigated into the water situation of the hut and looked into the tanks and noticed they were empty, looked at the plumbing but looked very complicated, as the water is meant to be supplemented by stream water, our only guess is that the pipes may have been frozen. 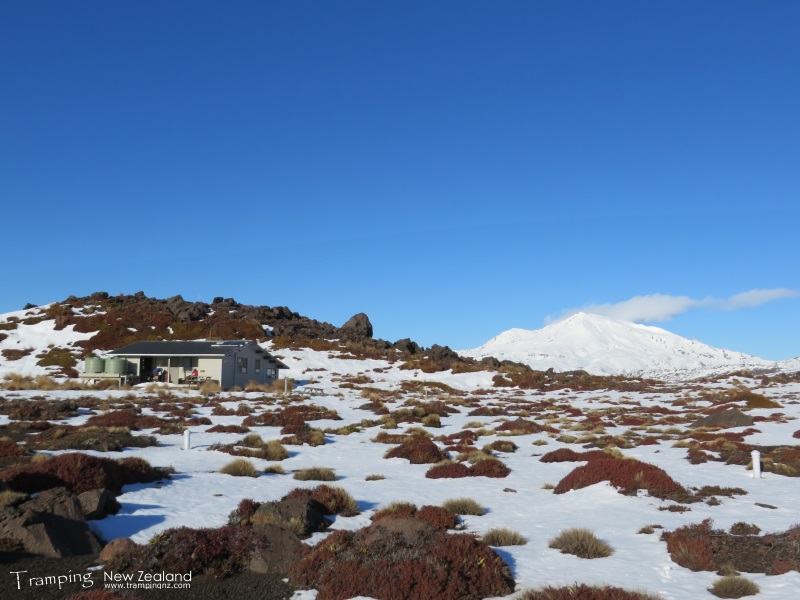 So we then continued on Waihonou Track which took us back to the cars.  Got back at the cars about 3.15pm, we loaded up and headed into Turangi for some fuel for cars and a bit of a feed.  Then we headed to Tokonau hot pools for a bit of a reward before heading back to Auckland via Tokoroa.  We also stopped for dinner at Matamata and finally got home about 11.30pm.

This was a very good trip with lots of fun, even though we did not complete the circuit, we achieved what we set out to do by tramping in snow and using crampons and ice axes.