People who attended the hike:

We all left home between 6 - 6.30am to go to Whakapapa Village - where we start our 4 day tramp. Before we started we went into the Whakapapa Visitor Centre to plan which of the two routes that we were taking and get hut passes. We started a video diary (thanks to Trevor) to record our trip. We all crossed the road and had some food at a cafe before we left civilisation.

Today we tramped to Mangatepopo Hut (1190m), which was a 3 hour trip. It started as a easy gravel track, this was followed for the next 30 minutes then over a river crossing to the bare ground track. We went through many valley's and there was lots of erosion along the track. We reached the hut at about 3pm.

As the afternoon started to turn to evening most of the Venturers started the card game "Mao". Jamie and Angus climbed up a peak nearby. Laurie and Trevor were resting on the deck outside. When the sun was setting to the west we could see Mt. Egmont / Taranaki on the horizon, it was a nice view. 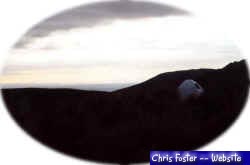 We all approximately got up about 6am, had breakfast and started tramping at 7am (very energetic aren't we). The aim of today was to complete Tongariro Crossing and climb to the top of Mt. Ngauruhoe. We tramped through Mangatepopo valley to Soda Springs, which was a solid 40 minutes hike. At the spring we filled up our drink bottles with the crystal clear, freezing, fresh water - The best tasting water on the whole tramp. This water came from the form of a waterfall and the source was from above. Ryan and Phil decided not to stop and continued to go up the step lava flow.

After collecting our pure mountain spring water, we climbed up the lava flow which took a while - when we thought we were at the top 3 times. Stopped at the top for a rest and then we hid our packs before setting off climbing Mt. Ngauruhoe. Ryan and Phil at this time were climbing Mt Ngauruhoe. Marc did not go up as he may have caused a problem. 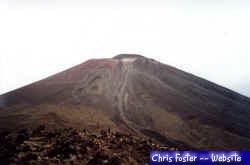 We climbed up the steep Mt. Ngauruhoe (2287m) where there was loose rock, which made climbing hard. Had to stop for rests several times. Often where there was big rock formations, we used our upper body strength to pull ourselves up. Near the top there was large patches of snow.

Snow near top of Mt. Ngauruhoe

Because our drink bottles running dry from climbing, we collected the snow for drinking. We managed to get to the top in about 2½ hours. It was a great view from the top where we could see the whole area. Saw Mt. Ruapehu, Emerald lakes, Mt. Tongariro, South Crater and Mangatepopo valley we just tramped up. At this stage it was about 11am and have risen about 1,100m. Angus saw a steaming vent along a ridge by the snow and went to it. Some of us skied down the small snow slope on our boots. It took ½ hour to get back down by sliding down the loose small rock.

Some of us at the top of Mt.Ngauruhoe

At the bottom we had a lunch break and we were all quite tired. After lunch we continued to tramp to Ketetahi Hut. Firstly we had to go through South Crater (1660m) which was a flat area, this was approximately the size of 1½km²??. At the edge of the crater there was a steep hill, which we had to go up. We were slow going up this as we were still tired from climbing Mt. Ngauruhoe. Had a small rest and continued on. Went up past Red crater which was full of activity of steaming vents. The smell from the vents was like Rotorua. Had another rest by a lake next to Red Crater, which we had view from. From here we could see the other lakes in the Emerald lakes group.

Looking from top of Mt. Ngauruhoe, foreground-left South Crater, centre Red Crater, behind is South Crater and in background-centre is Blue Lake

Had to tramp through Central Crater, an area similar to South Crater but was full of rocks and a smaller hill to go up. Another rest next to Blue Lake - this was the last before the hut. The track then went along a hillside and was easy going downhill. Got round one of the corners and saw the hut down the valley. We anticipated it would take 10 minutes to get there, until we saw the track extending for another 1½km as a spiral down the hill. Arrived at the hut and had a nice view down to Lake Rotoaria. 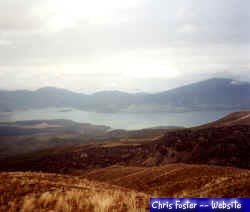 That night again we played Mao. We had dinner about 4.30pm. It clouded in quite thickly as we could not see anything about 20m away. One of the weirdest things about this hut was that it had flush toilets and it was in the middle of nowhere.

We got up again at 6am and left at 7am and heading towards the destination of Waihohonu Hut. Had to back track to the Emerald Lakes junction which took 1 hour 20 minutes - Sign said 2½ hours. Just down the hill from the turning, Trevor picked up a small rock and threw it into one of the Emerald Lakes - it went further than he thought. Chris also threw a rock and Angus was looking at a vent that water was coming out and it tasted awful. Trevor picked up a bigger rock and Alistair got hit with the rock and both got hurt, Trevor got a bleeding finger from the accident. When this happened Laurie and Marc caught up.

After this we continued to Oturere hut, down steep lava forms and desert like surroundings of sand and big rocks. Jamie, Ryan and Phil left a sign of 8.43 to indicate their position ahead, the big group was about 20 minutes behind. Had a small smoko about 1 ridge from the hut, from here we saw Jamie and Ryan leaving the hut. Got out the map out and we were within 5 minutes of the hut so we halted the smoko and got to the hut. The visitors book confirmed our sighting of Jamie and Ryan. Had an extended break of 1 hour at 10.30am where we were boiling up water and having lunch before continuing on.

From Oturere Hut (1360m) the area was fairly open and not much vegetation around. Had to hike through a few valley's. One had running water and stopped for 15 minutes to cool our drinks down. This point on there were some more valley's and then hiking along a ridge which seemed forever. Started to go down from the ridge and into bush surroundings, crossed a bridge - with flowing water, had a break. Started the climb from the valley to the top of the hill. This valley was weird as it was bush in the middle of nowhere. Got to the top and saw the area where we were going to hike through on day 4. Saw the Waihohonu Hut (1120m) from here and was just downhill from here.

Bush in the middle of nowhere

There was running water flowing below the hut which was cold. Some of us visited Ohinepango Springs, which can be described as a river coming out of the ground. Again we had dinner at 4.30pm, played Mao and flush toilets again.

Got up again at 6am and left at 6.45 for Whakapapa Village. From the hut at 6.30am there was a good clear view to Mt. Ruapehu with quite a lot of snow on top. The hut warden said there was a nice sunrise over Mt. Ruapehu. This was quite a flat track by the river, sometimes going up & down slight slopes. It was quite boggy in places and was cloudy on Mt. Ruapehu & Mt. Ngauruhoe. We by-passed the Old Waihohonu Hut which was a red colour (which could be partly seen from track). 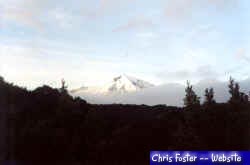 View of Mt. Ruapehu at 6.30am from Waihohonu Hut

The Venturers had a break every half hour or so as we had quite a fast pace. Angus and Phil was ahead and reached the Tama Lakes junction at the time of 8.43am and Venturers behind at 9.03am. At this point we were 2/3 of the way to Whakapapa Village - where the vehicles were parked. Reached the Taranaki Falls junction and could see the Chateau. Most of us visited the Falls and was a wonderful sight. We all came back at different times between a 1½ hour timeframe, before 12pm.

Left Whakapapa Village (1140m) had two major stops. First stop was at Taumarunui for lunch at a Chinese take-a-ways and the second was a Pokeno where we had large ice creams. We all got back home after 5pm. 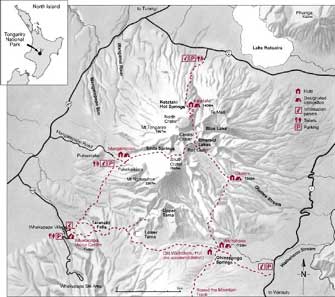