For between Xmas-New Year tramp, we headed down to Pureora Forest Park.  I was joined by Vanessa, Chris S and Staci.

To be able to make the transport shuttle departure time tomorrow, we left Auckland on Boxing Day afternoon.  We headed south to Te Kuiti with a couple of stops on the way.  We stayed at Casara Mesa Backpackers which is on the outskurts of Te Kuiti, which had a view overlooking the township.  We went to town looking for dinner, but with most places closed, we settled for takeaways and took it back up the hill where we enjoyed the evening sunset.

Got up and had some breakfast and final packing our packs before we headed to Ongarue to meet up with our track transport.  The shuttle transport was also taking mountain bikers as we both start on the same trail.  After about an hour we arrived at the start.  We got our packs adjusted and we were on our way.  Some of us did the Totora Walk before starting, it had amazing views of trees and birds singing.

The Timber Trail is a grade 3 mountain bike track, so it well maintained and was easy to walk along, hence why this is our biggest distance day.  We stopped alongside the track for lunch at the 5km mark.

At 11km mark some of us decided to go up to top of Mt Pureora which was 40 minutes each way.  As we were heading up it started hailing, however this did not last too long and it cleared by the time we got to the top.  We had awesome views taking in all round the area including Lake Taupo, Mt Ruapehu, etc. 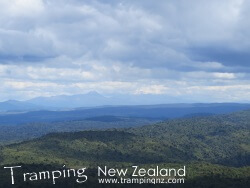 From here we continued along the Timber Trail towards the hut for another 2 hours, which all of us reached at the same time.  We prepared our beds and then cooked dinner and ate outside, enjoying the evening until it got dark, where we went to bed.  In the hut book, noticed that a lot of TA walkers go through here.

Due to the distance to the next hut, we decided to split the next bit of track into two days (hence why we were carrying tents).  So once had breakfast, we packed up and headed off.  We took the track that went round the bog, which was of a good tramping standard.

As the day progressed, we were slowly gaining height, going along a ridge.  Finally we reached the highest point, Weraroa.  From here it was then downhill until we stumbled into the campsite that we were going to stay at tonight.

This campsite is at the bottom of the hill, a stream flowing next to it and an area for a campfire.  We setup camp here for the night and cooked dinner before going to bed.  We also had a small campfire.

Got up, had breakfast and then packed up camp before heading off for another full day.  For the next while it was relatively flat and easy going.

As the day went on we had some undulating terrain, until we got to a certain point of the track.  This is where todays challenge came in.  Firstly we had to navigate down a near cliff face down to Mangatu Stream, which took us some time due to the stepness.  Then we had to cross the stream and climb under a trunk of a tree that had fallen down to the next part of the track.  Finally we had to climb up the other side of the valley, which was steep but not as bad as coming down.  Once we got to the top, we rested a bit to catch our breath.  So this part of the track took us quite a while for the about 300m distance. 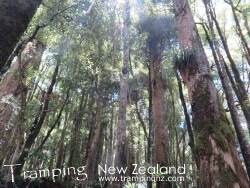 From here onwards, the track returned to an easy gradient and also followed the river to Waihaha Hut.  Once arrived at the hut, noticed that it was nearly full, so half of us camped and the other half in the hut.  From the hot days walking, we had a swim/dip in the river, which was refreshing and made us feel clean.  We then cooked up dinner on the deck.

After dinner we reviewed the maps and the track timings for the rest of the tip.  We decided that the slower person would stay an extra night at the hut and then walk out using the Waihaha Hut Track to the road-end as this would be easier.  So we re-shuffled all our gear for the change of plan.

Had breakfast and packed up.  For the faster group, we were not sure what we are getting ourselves into as the track time is indicating some difficulty ahead.  So we started the day by following the Waihaha River, which was easy as it was mostly flat.  Then we got to the hard stuff of the day which involves going up a steep hill to get onto the ridge.  This would equal to a similar amount to what occurred yesterday.

Somehow some energy was found and we were following the slow uphill at speed, which meant we covered quite a bit of distance in a short amount of time.  Finally we stopped for lunch, but afterwards it came to bite us, as the next uphill bit was straight away, which meant that we struggled, huffing and puffing our way up to the top (this was not a good move).  However we carried on as it flattened out for a while until the last uphill push to the hut.

We made it to the hut 1/2 hour faster than track time.  So we spent the afternoon drying out clothes, equipment and relaxed on the deck.  There was also a checky afternoon nap thrown in for good measure.

Cooked up dinner and ate it outside enjoying the view before heading to bed.

The final day.  Not sure 100% how long it was going to take us to get to the road-end as there were a number of signs all with different times.  We took a stab of being the middle to the latter of the timings.

So mostly the track was downhill, but there were some uphill in places, especially arount Mt Motere.  The track has overgrown and boggy in places.  We finally got to the road-end, but it was not the end, we still had a little bit to go along the road to the pickup point which we got to in 3 hours.

We were picked up and then transported back to our car.  We got changed and drove round to the pickup point for the slower person and they were waiting for us.  We were all reunited.  The decision to split up was the correct call, otherwise we would not have completed the rest of the track in the planned timeframe.

We stopped for lunch in Tokoroa before heading back to Auckland, getting back just before dinner time and to enjoy New Years Eve.