For labour weekend, we headed down to Pirongia Forest Park for an overnight tramp.  I was joined by Chris S, Staci and Cam.

An early start, leaving Auckland to ensure we can get on the track by 10.30am.  We made a stop for breakfast on the way.  We reached the carpark and sorted out packs out to get going.

Today we are heading up to Pahautea Hut via Pirongia Summit.  To start we walked along an access road to the start of the track.  This took us uphill along a ridge line.  Had to make sure you know where you are putting your feet as there is quite a lot of tree roots.  As we get closer to the summit it got a bit more steeper and muddy (cue putting on gaiters).

From the track junction there was board walks up to Pirongia Summit.  There was amazing 360 degree views.  You could see all around including Mt Ruapehu & Mt Ngauruhoe to the South.  However there still was a bit to go to get to the hut.

Finally reached the hut, got changed and setup our beds.  We rested for the rest of the afternoon admiring the view from the hut.  We cooked dinner, played card games and went to bed. 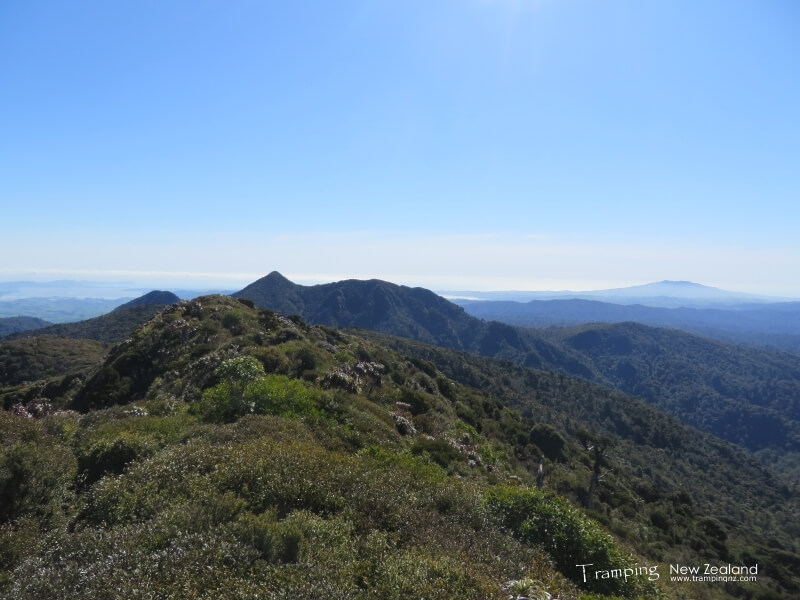 The cloud had come in overnight and the pridicted rain starting to come in.  So we set off down Bell Track , which is the longer way down to carpark.  It first started with board walks, which was quite nice and then it stopped.  Then it was into mud, glorious mud, often up to your knees.  This made it hard and slow going.

Reached up to the Cone (second highest point), where you could see nothing and then it was downhill.  We stopped for lunch and a wild goat came for a visit.  Then we continued along the ridge all the way to a campsite, which is about half way (took us 6 Hours 15 Mins).  At this point we were quite exhaused, so we had a break.  With energy food taken onboard, we then continued.  The track was less muddy and more like the previous day.

We dropped off the ridge and crossed the bridge then followed alongside the river, which was undulating until we met up with Nikau Walk track.  Then it was back along the access road to the car.

Reached the car, got changed into clean clothes and started heading back home to Auckland.  Stopped in Ngaruawahia for dinner at a takeaways.  Finally reached home at 10pm.  A great overnight trip but it is harder than you think it is.