For Waitangi weekend we headed to the Kauaeranga Valley in the Coromandel in preparation for our annual week long tramp in March 2009. I was joined by Jamie, Ryan, Angus, Alistair, Chris M, Rosie & Ush.

Warning: The side trip should be only be attempted by experienced trampers, due to bush bashing, map, compass, GPS required and increases difficulty.

Left Auckland at 12.30pm on Waitangi Day to head to Kauaeranga Valley near Thames which is a 1 3/4 hour drive. We first stopped at the service area on the Southern Motorway, where we all meet up together and had lunch at McDonalds.

After lunch we continued onto DOC Kauaeranga Visitor Centre (which has now been re-built after a fire a few years back) in Kauaeranga Valley to pickup and pay for our camp/hut tickets (booked in advanced), then continued heading up the valley to the road-end.

We put our packs on and headed off up Webb Creek track as three groups. This track follows the historic packhorse route to Hydrocamp. The river level was low so we opted for the river crossings rather than the flood detours. Due to the heat of the day, we were all sweating a lot. About 1/2 way up Chris M & Rosie had to fill up their camelbak bladders with more water. It took 1 3/4 hours to get to Hydrocamp.

Stopped for a short break at Hydrocamp before continuing onto the Pinnacles Hut. We reached the hut 35 minutes later. Half of us were camping and the other half (couples) were in the hut.

Those who were camping, we headed down to the Dancing Dam Campsite, a few minutes away from the hut. This is where we setup Chris M's demo Tent and Hammock borrowed from his work. The tent was orange and was setup first (this was worth $1000), it looked small but when it was all up, it was quite roomy for three of us. Next the hammock was put up, all secured tight to fence and table, once got in the table started coming over (like timber!). So we secured the other end to a tree instead, which worked a treat. 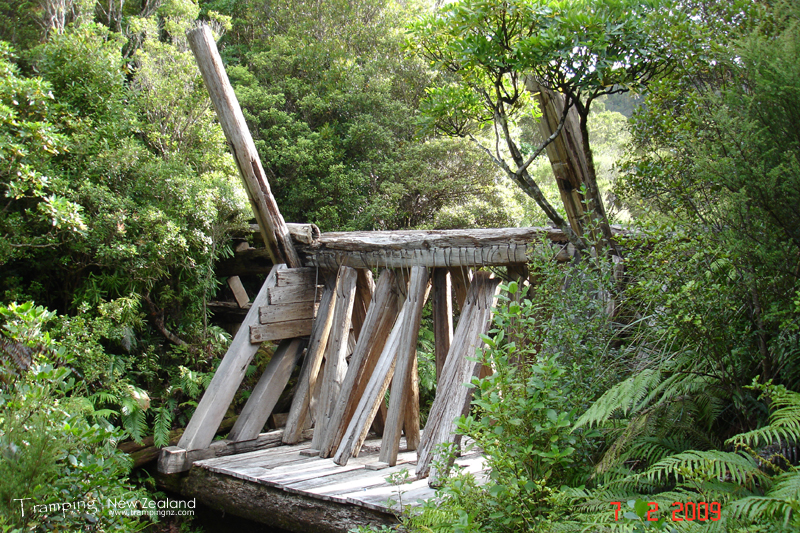 After this we headed back up to the hut and began cooking dinner. Since this was the first night, basically everyone had fresh food, once dinner had been eaten, we moved inside to play Bang! card game, after a while the solar lights came.

After finishing the card game we headed down to the campsite to bed. I had my torch hanging from the top of the tent, as we finished getting into bed the light of my torch went automatically out (that was clever). However I discovered the next day the bulb actually blew, lucky I had a spare on me.

Woke up at about 6.30am after a very light sleep but did not get out of bed some 40 minutes later. Headed up to the hut to have breakfast. While having breakfast we plotted out on the map our intentions for the morning's bush bashing session and inputted them into the GPS.

Just after 9.30am we set off bush bashing. The first thing was to head straight up hill, this was steep, with markers marking the route to the top. From there we had to work out from the map our next direction to an "old dam" - this was supposedly meant to be one we visited before in 2002. However with a direction now in hand we started bush bashing down the hill. All of us began getting cut by cutty grass, but no one did it better than Jamie, who we had to perform first aid on due to quite a deep cut.

Then we started heading up another hill, not so steep. Then we noticed that we missed a dam by about 100m (which is the one we thought we were going to) but the map and GPS said otherwise, so we continued down to the next valley. Hit the river and started heading up to it, but there was a massive landslip which made it impossible to reach, so we found a spot down river for a break.

So we followed the river down. We came across a steep part of the river where we could not go down so we had to go slightly inland to get down safely (and that was a challenge in its self). Continued down river with a number of other rivers merging into it until we hit a big dam, where only the floor structure exists. Had lunch and explored the structure.

After lunch we headed back up river a little to meet a track which would take us back to the hut. Once we got back to the hut we worked out our statistics of 5 hours and we were travelling at 0.4km/h. All of us had a cold shower as the day was very hot and sweating.

For the afternoon we rested and played card games. At about 6pm we had dinner and then we decided that we would head up to the pinnacles for the sunset, as it would not be so hot.

About 8pm we headed up to the pinnacles and reached the top just as the sunset was started. We watched the sunset and then we went down as darkness set in. When back at the hut we played Bang! card game until we went to bed.

Today we were heading back home. Woke up about 6am and went up to the hut and had breakfast. After breakfast we headed back down to the campsite for the final time to packup.

At about 8.40am we headed off back to Hydrocamp which took some 25 minutes. Had a break and then headed off onto the Billy Goat Track, where it started going uphill before going down.

The track has slightly changed round the river crossing where the track now goes along the river before crossing over a flash bridge. This really takes the fun of having a break at this location and crossing the river. However we continued to the intersection with track to Hihi trig, where we had a break. 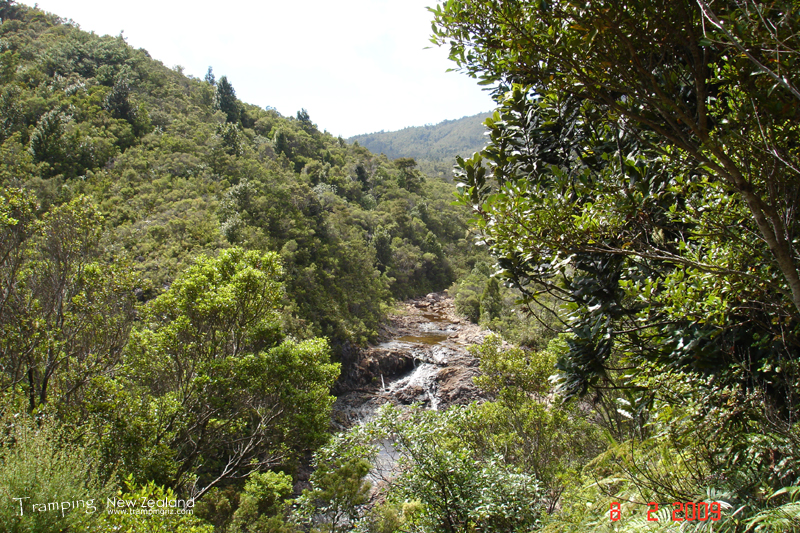 From this point it was down hill down the incline at an easy pace, meeting up with railway tracks. We took a shortcut which involves bush bashing which took us directly back to the carpark. It was about 12.30pm when we got back to the cars.

So as per usual on our way home we stopped at Pokeno for big ice creams. Got home about 3.30pm.