For the annual week long tramp, we headed over the Hauraki Gulf to Great Barrier Island. I was joined by Jamie, Ryan, Angus, Alistair, Trevor, Chris M, Rosie and Jeanie.

Warning: One of the tracks should be only be attempted by experienced trampers, due to bush bashing, map, compass, GPS required and increases difficulty.  See track safety notice.

Left Auckland at 7.00am to head to Dairy Flat Airfield (North Shore Aerodrome) where we flew to Great Barrier Island on a Great Barrier Airlines Charter Flight. Once we arrived at the airfield we were checked in and waited for the plane to be ready for our boarding.

Due to the bad weather the plane was fully loaded up with fuel, next we learnt that even we were under the 15kg baggage limit, all of our packs could not be loaded into the small plane, so we split part of our group onto the next flight.

After a delay boarding time came and most of us boarded the plane, then headed to the "Barrier". The flight was not too bad, could not see much due to the weather. When coming in to land it was a little rocky, however we landed successfully.

Once collected our packs and put on our wet weather gear, our first mission was to find a shop that sells gas for our cookers, with success, this happened to be around the corner, once the place opened we purchased our gas.

Then we continued onto Claris, where we stopped at another shop for water, other supplies and something to eat. Once all set, we headed along Sanderson and Blind Bay Roads.

Finally we hit Te Ahumata Track where it allowed us to get off the roads and onto the real ground for tramping. In places along this track was quite slippery as we climbed up along side Te Ahumata. 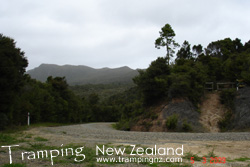 Reached the end of the track, had a break before going along Forest Road which is now basically a mountain bike track. A while later we turned onto Tramline Track going downhill to the Green Campsite, where we were to stay for the night.

We setup camp and relaxed. A couple of hours later the other group arrived at camp. Due to severe weather warnings in place, we setup some additional shelter.

Woke up to rain and the most of the severe weather seems to have passed through overnight. Packed up our wet tents and reviewed our day's intentions. Not knowing how much more severe weather to expect (the last report said that it could be up to 2 days), so we altered our route to reduce the number of river crossings (as water can rise high).

Headed back up Tramline Track were we could see increased river levels, turned onto Pack Track, which gave us a couple of challenging river crossings until we reached Forest Road. We continued along the road until we reached the hut. We were supposedly to go along another track to reach the hut but it was nowhere to be seen.

Once at the hut the rain had stopped and we changed into dry clothes and hang up our wet ones including tents. We spent the afternoon playing card games including Bang.

We started noticing that the maps being used had different tracks marked and not marked, which meant that we had to use the combination of them for our navigation.

Had dinner and then went to bed, during the night it was very hot and most of us slept out of our sleeping bags.

Today was the cross-country trip where we go from one coast to the other. First of all was a few river crossings along Kaiaraara Track which follows Kaiaraara River.

About 1 1/2 hours from the hut we took a small side detour to view the Kauri Dam. This is the biggest and best preserved Kauri Dam in the country.

Now we went down the other side and heading along Windy Canyon, which has very interesting land formations. Then we exited out onto Aotea Road, where we continue onto Harataonga Bay.

We reached the bay by mid afternoon sun; we ate some lunch and then headed to the beach for a refreshing swim in the sea.

For the rest of the afternoon we relaxed and played card games. When we went to bed you could see the stars.

Our final day on the island. We headed down Aotea Road to find a track which exists on one of the maps (but not the other), after 1/2 hour of searching it was located.

It appears that this track is no longer maintained which meant a lot of bush bashing and interesting views. This slowed down our pace quite a lot. Finally we emerged at Tramline Track, so we headed down to the low lying land where it was a little swampy.

Along the way we reached the hot springs where we had a break for lunch. Then we continued onto Whangaparapara Road, which started heading us back to Claris. 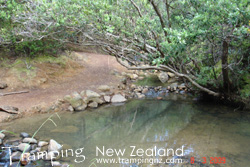 Once we reached Claris with a couple of hours to spare, we stopped at a cafe where we had some real good food and refreshments, which was well deserved.

Once finished we continued round the corner to Great Barrier Aerodrome, where we checked in for our charter flight back to North Shore. All of our bags were weighed and worked out who had the lightest pack at the end of the trip.

Again we found out that they could not take all of our packs, so some of our packs went in another plane (which was flying at same time) while all nine of us were in one plane. Boarded the plane and left the Barrier.

Since it was a fine day we could see the area where we tramped, Coromandel and the Hauraki Gulf. When we were coming closer to land we did a 360 around the aerodrome which gave us a wicked view due to another plane was landing before us.

Once landed picked up our packs and headed home which was only 15 minutes away. It was a very enjoyable trip.