As part of a series of tramps planned for the rest of the year. This tramp is a warm-up tramp for our end of year 4 day Tongariro tramp.

We started the track about 9:10am. It was quite a fast paced walk through the bush to where the river where we had to cross was. The venturers waited 5 - 10 minutes for the adults to arrive. During that time we have been deciding which was the best place to cross. Within a few minutes we were crossing the river and had morning tea, about 1 hour after leaving the cars. 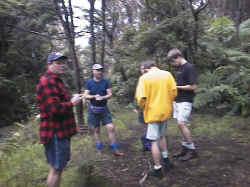 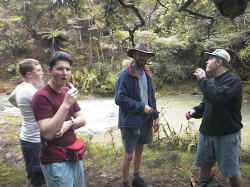 Once we had our energy boosting food, we started again. This time along the track next to the river. We had to go through and cross the river numerous times (gave up counting).

Most of us took a challenging way of climbing up a mini waterfall (approx. 1m high). While a few decided not to go for the dear devil stuff and took round the side through bush and crossing at a later stage. Of course we had to wait for these few. 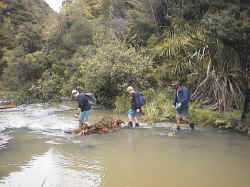 Peter, Mayer & Angus - about to fall in

Soon after this approx 11am, we arrived at the place we designated for lunch. Jamie decided to play with the dog in the water by throwing sticks. A few of us decided to play a new game of cards that Phil taught us, was very interesting. While others decided to get their cookers out and cook some food to eat. 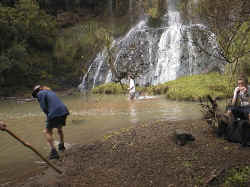 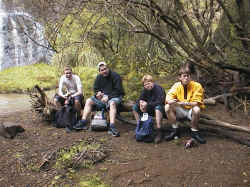 About an hour after arriving, it was time to move on, so it was a casual walk back to the cars. After first climbing a steep bit and then it was all flat. The sign said about 45 minutes and we completed it about 30 minutes.