For between Xmas-New Year tramp, we headed down to Whirinaki Forest Park. I was joined by Vanessa, Chris S, Staci and Abigail.

Note: We deviated from our original intention for days 3 & 4 in which hut we stayed at due to breaking up the two full-on long days together, so stayed at Central Te Hoe instead of Mangakahiki.

Warning: The track between Upper Te Hoe Hut and Central Te Hoe Hut should not be attempted due to shear cliff-face at Central Te Hoe end (Te Hoe Bluffs), where the track has basically fallen away from the cliff.  This has been reported to DOC and aware of this and have now classed the track as a route (http://www.doc.govt.nz/parks-and-recreation/places-to-go/east-coast/alerts/).

We left Auckland at 7am to head down to Te Whaiti.  Stopped at Rotorua for late breakfast/early lunch and we then visited the iSite/DOC for those that required hut tickets.

Prior to where we parked the car, we all got changed to save time later for when we arrived at track transport (https://www.whirinakiforestholidays.co.nz/shuttles) place, so we all sorted out the group gear and loaded up our packs.  At about 1pm we were then transported to River Road-End for the start of the tramp.  Got dropped off and set our course for Central Whirinaki Hut which is about 4.5 hours away.

One thing that was noticed after we started that it was hot, along with the sunny weather, which is due to say with us for the whole trip.  Quite a lot of the track is benched which made it quite easy but every now again we had little rest stops as we were going quite fast and over heating.  We had a big break at Verns Camp, which you could tell quite well by now that we were being affected by the heat.  We then continued onto Central Whirinaki Hut, once arrived it was decided to have a swim in the river before dinner.  We had dinner and then went to bed a short time after as tomorrow is going to be a big long day. 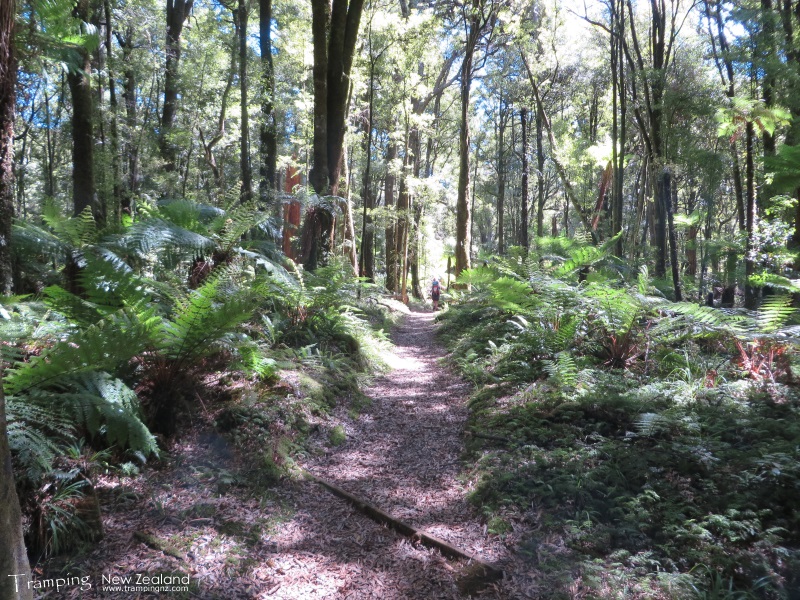 Today is our longest and hardest day of the tramp (of 2 hard days), so we got up, had breakfast and packed ready to go by 8.30am.

So it was initially following the river along a benched track until we got to the bridge which we do not cross but keep going straight ahead (following the river).  Then it was basically in the river or bush bashing along the sides of the river until got to the next track junction (Mangamate Track).  At this point we got a good track again as it had only just been cut/cleared a couple of weeks beforehand, so it made it quite easy to get to Upper Whirinaki Hut, where we stopped for lunch. 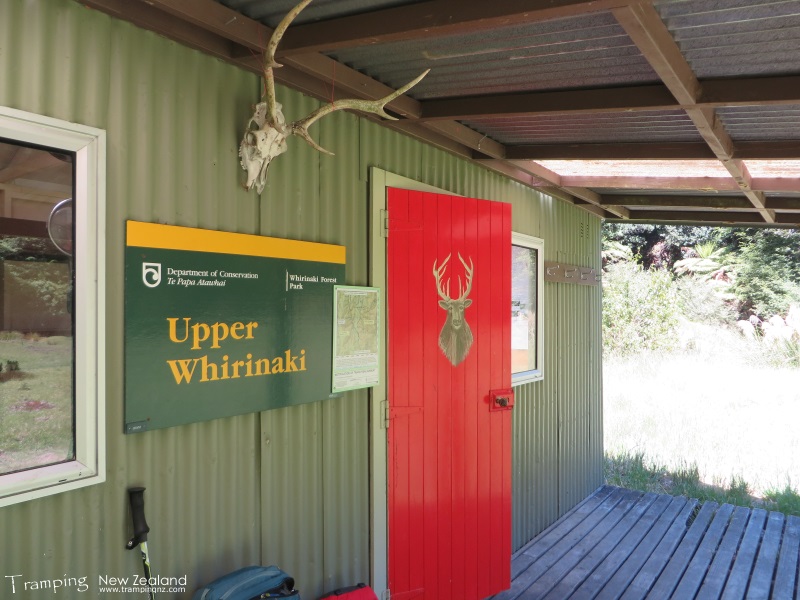 We took note of the new re-aligned track which does not show on the topo maps and started heading to Upper Te Hoe Hut.  This is where the track was not in a great condition (due to storm damage and trees across the track) and required a lot of concentration on keeping an eye out for the orange markers.  By where the new and old track alignment meet, there is a new bridge, so it looks like there is still quite a bit of track work to be done in this area.

Basically we are following alongside the river before heading uphill to the saddle to the next track junction.  So it was hard work getting to the top because it was hot.  At this point this has taken us longer than expected (do not rely on the sign posted times), being 10 hours in (at 6pm) and still had over 2 hours to go before starting to run out of sunlight.  Had an energy break before continuing on. 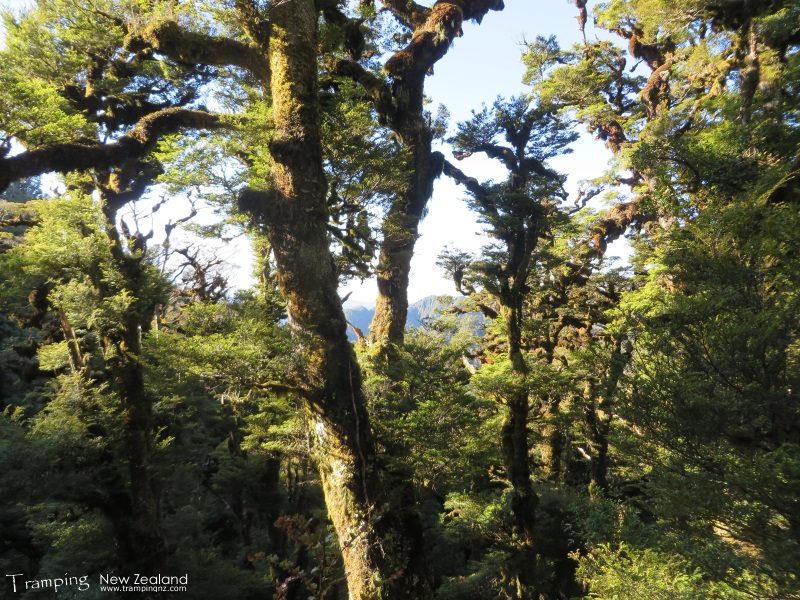 The standard of the track has now improved, which has allowed us to pick up the pace a little and is now mostly downhill.  Although we did get slowed down again once we were off the ridge due to storm damage and trees across the track, which we had to navigate.  As the sun started to set, it started to get dark and we finally reached the hut just before 9pm, making this a 12.5 hour day and we were all tired.

We cooked dinner, a quick wash from a bucket and then went to bed about 11.30pm, which is quite late for a tramp.

Got up, had breakfast before getting going for another long day.  To start off the day we had uphill to get up and over the saddle onto the ridge line.  We had our first break at the top of the saddle.  Then it was along the ridge which was up and down.  Due to being hot, every now again we had to stop for rests.

When coming off the ridge and going downhill, reached the benched track, which took us to a cliff-face that we had to traverse.  In some places we had to cross one by one because a lot of the track had fallen away and anything try to grab would just fall away, so this made it quite dangerous.  In some places there was wire rope but not where it is really needed.  Because this was also in direct sight with the sun, it was not easy work.  We are recommending to DOC to close this part of the track.  Once passed this, we reached Central Te Hoe Hut where we stopped to have lunch.

Once we finished lunch we had a meeting to decide do we either continue on or stay the night at this hut.  Due to everyone being poofed from the previous day, it was decided to make tomorrow the longer day instead.  So we then freshened up by having a swim in the river or wash from a bucket and relaxed in the sun for the rest of the afternoon.  There was a bucket full of beers in water sitting next to the door of the hut so we helped ourselves.  Had dinner and went to bed.

Another cracker day, we packed up and then headed off to Skips Hut.  Basically this is just following the track up the valley alongside the river.  We stopped at the bullring camp for a break before tackling the saddle.  So it was a zig-zag climb uphill to get to the top where we had a quick rest to recover before heading down to Mangakahika Hut.  Once at the hut we stopped for lunch.

After lunch we continued onto Rogers hut, which the track was mostly benched or quite flat, so was of a good standard which allowed us to go at a good pace.  Stopped at the flash campsite and decided to use the facilities of the flush toilet, just to be a bit fancy and it is not something you get to experience a lot while tramping.  After a while we reached Rogers Hut where we had a break.

Finally we had one final hill/saddle to cross over, which meant the last of the major uphill for the trip.  So we took our time going uphill by having quick breaks every few hundred metres due to being hot, then it was down to Skips Hut.  Once we reached the hut there was a hunter and this is the first person we have seen all trip.  First priority was to have a swim in the river before we cooked dinner and going to bed.

The final day, being New Years Eve.  So we got up and ready for the short 1.5 hour walk to the road-end.  The track was mostly benched so it was quite easy.  We reached the road-end about 45 minutes before scheduled pickup which took us back to where we parked the vehicle.  Headed back to Rotorua, stopped at Burger Fuel for lunch before driving back to Auckland via Pokeno for ice cream.

I am glad that have now completed the Whirinaki circuit fully, where as it was cut short last year (https://www.trampingnz.com/report-07-te-hoe-whirinaki-2014) and can totally appreciate that we made the right decisions based on the circumstances that was experienced.