For a 5 day tramp, we headed down to Mt Aspiring National Park.  I was joined by Stuart, Abigail and Chris L.

We flew down to Queenstown on Jetstar flight JQ293, arrived late afternoon.  We got a Supershuttle to transport us to our accommodation at YHA Queenstown Central for the night.  Meet up with Stuart who arrived earlier in the day.  So we walked around town to get some gas and the last supplies.  Continued to walk around town and finally ending up at a pub where Abigail & Chris arrived and we all had dinner.

We had a group briefing for the trip and talked about the weather, especially when it is predicted to rain for the next few days and to watch the river levels and what to do to ensure we don't get stuck or have to go back.  Then we went to bed as we have an early start.

Got up early and ensure that we got everything packed.  Put some gear into a locker and then checked out of the accommodation.  We all went to the bakery across the road where we had a pie each for breakfast.  Then we headed to meet up with track transport Glenorchy Journeys to take us to Muddy Creek.

The weather was starting to change where it was now starting to rain on our way to the track end.  We got dropped off and it was pouring with rain.  So with our rain jackets on we set off to Shelter Rock Hut.

The track started by going over private farmland which was just following up alongside the Rees River, this was fairly easy.  You could see the multiple waterfalls that the rain has made on the mountain side. 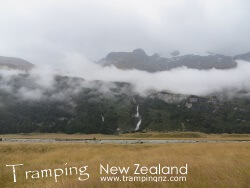 After 3 hours we finally reached the bush, where we stopped for lunch.  Now we were following up the valley for the next couple of hours.  Crossing a few small side rivers and avalanche paths.

Finally reached the hut.  We all got changed out of our wet clothes and hung them on the line to dry.  After about an hour being at the hut, the rain had stopped and cleared up, the sun along with blue sky came out.  Which made it a nice end to the day.  We had dinner and then went to bed.

Got up to a blue sky day with some cloud.  Had breakfast and packed up ready to go.  We continued to tramp up the Rees River Valley.

Once we got to the head of the valley we had to go up and over the Rees Saddle.  This was a steep climb up to 1471m.  Once at the top we stopped and had lunch. 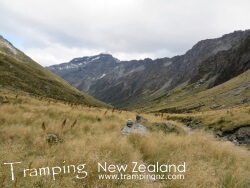 We were now following Snowy Creek down to Dart Hut.  The first part before the bridge was quite nice along with its views.  We reached the bridge (which gets removed in winter) to cross to the other side, so we can make it down to where it meets with Dart River.  This was a steep decent.  Finally crossing another bridge over to the hut, where we arrived mid afternoon.

We relaxed for the rest of the day before having dinner and going to bed.

Got up to a stunning sunny blue sky day.  Today was a side trip day, so no big packs.  Packed our day packs with lunch, water and some warm clothes.

We started heading up the Dart River towards the Dart Glacier.  This followed the river up and required a couple of river crossings.  We saw a NZ Falcon, which was very photogenic.

After a couple of hours we reached the glacier.  Since the weather was still great, we decided to head uphill to Cascade Saddle.  This involved quite a climb over various types of terrain.  It can be steep and slippery in some places.

Saw some Kea's, where we took some photos of them.  Finally reached up to the saddle and there was some amazing views.  You could see all around and also over to Mt Aspiring in the next valley over.

So we found a high point and had some lunch while admiring the views.  This was definatly the highlight of the trip. 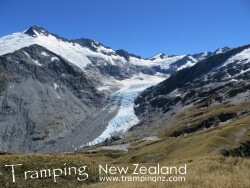 After lunch it was then back down hill all the way to the hut.  Had to be careful while going back down to the glacier as it was slippery in places.  Then it was following the same path back to the hut.  One thing is that due to snow / ice melt, the rivers that had to cross were running a bit higher than earlier in the day, so it made it more of a challenge getting back without getting wet.

This was a full day.  Got back to the hut, had dinner and then to bed.

Another blue sky day, today we are heading down river to Daleys Flat Hut.  The first bit was going through bush high above the river, which was quite nice and different to what we have experienced so far on the trip.

Then we reached an area called Cattle Flat.  This was basically going over a long grassey plain.  However deprite its name it is not flat, there is a lot of ups and downs.  As going along there were some awesome views of the valley in all directions. 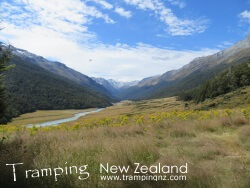 Had lunch at the end of Cattle Flat where we met the bush again before reaching the hut.  We assisted with an injured tramper that we came across about 1km from the hut and got him to the hut.

Had some dinner and went to bed.

Our earliest morning start on the track.  When we got up it was still dark, so there were quite a number of red lights coming from peoples headlamps.  Had some breakfast and packed up ready to go.

It was daybreak when we got going on the track, we factored in some extra time on the track which we were advised of being rough in places.  The first part of the track was good and relativly flat.

We then reached the track diversions which required going over a lot of tree roots, rocks, etc.  So this took up a bit of time and added a little bit of difficulty to the track.  Once past the diversions and round the bluff, the track returned to a good standard.  It started to rain a little bit but was quite light.

Finally we reached the track end, with plently of time to spare.  So we had some lunch while we waited for our track transport to arrive.

Track transport picked us up and took us all the way back to Queenstown, with a short stop in Glenorchy.

Checked in to our accommodation and had a shower to clean ourselves up.  Then we all met up and had and ice cream.  A little later we then had dinner and then made our way to bed.

Today had a small sleep in.  Packed up and checked out of accommodation.  Left pack in luggage storage for the day.  We all met up and went to have breakfast.

After breakfast we walked around town and through Queenstown Gardens.  Stuart and Chris were the first to go to the airport.  So Abigail and I continued exploring round town.

Picked up pack and then caught the bus to the airport.  Flew on Jetstar flight JQ298 back to Auckland.  The flight was quite bumpy at the start as we were climing.  However, safely made it back to Auckland.