For a South Island week long tramp, we headed down to Greenstone & Caples Conservation Areas. I was joined by Vanessa and Tim F.

Vanessa and I flew down to Queenstown on Jetstar (https://www.jetstar.com) flight JQ295, leaving at 7am.  Arrived in Queenstown at 8.55am.  We then got a bus which took us to the centre of Queenstown.  This is where we meet up with Tim who arrived the day before and took us to the accommodation to get the final preparations done.  We then went down the main street to obtain the keys for the huts we booked and gas for our cookers.  With a bit of time on our side we did a spot of shopping for last minute supplies.  Headed back to the accommodation to get our packs, left some gear in storage and meet up with our track transport at 11.30am.

Our track Transport Glenorchy Journeys (http://www.glenorchyjourneys.co.nz) took us out to the Greenstone Road-end, to where we were starting the tramp.  During the drive out the rain started to set as per the predicted weather forecast, which would be round for a few more days at least.  Once dropped off, we had lunch at the shelter before setting off.  As we started the track was well graded and marked, following the Greenstone River.  Since it has been raining here for a bit already the river was up quite high in flood.  After about 45 minutes we reached the track junction with Caples Track, we crossed over the river using a bridge to allow us to continue up the Greenstone Valley.

With the rain set in and being quite warm, we allowed ourselves to get wet (by taking off our rain coats).  Basically we were following a benched track along side the river for most of the way.  We came down to the rivers edge by Slip Flat, where we needed to do a river crossing, we deemed it to much of a risk as the river was flowing quite fast and is up high; so we decided to take the emergency/flood detour of where there was a small bridge to cross upstream.  While we were navigating we tried to find Slip Flat Hut, but was unable to find (the ranger later said that it is well hidden).  So we continued on.

We then reached the junction with Greenstone Hut, we stopped for a bit and discussed our intentions for the rest of the day at it was about 5pm and we were quite tired and wet.  We knew that we could carry on to our destination hut but would require a break.  So we headed for Greenstone Hut, it was then decided that we would stay the night here rather than continuing on for up to 2 hours to Mid-Greenstone Hut which we had booked.  So we got changed from our wet clothes and headed into the hut to claim a bunk.  We cooked up dinner and relaxed for the rest of the evening.  Spoke to the hut warden of our intentions and he provided suggestions.  Since it is daylight savings, it does not get dark until at least 9.30pm before we headed off to bed.

The rain had cleared up a bit, so weather wise hopeing for it to get better.  So we were still a little undecided on which of the two options we were going to do due to the weather, so we said lets evaluate it at the track junction.  Continuing along the Greenstone Track for the next 1.5 hours, as we went further along the bottom of the valley, it opened up.  We did a detour up to the Mid-Greenstone Hut which we had access to, this is where we stopped for lunch.  It was a great lunch because we decided to toast it, along with a view of the valley and keeping dry - bonus.

After lunch we joined back up with the track again and got to the point of do we go to Steele Creek Hut or McKellar Hut.  Due to the weather starting to clear we decided to go the more challenging route of Steele Creek.  So it was a short quick steep uphill start before we headed back into the bush.  The bush was all nice and green with moss covering the ground.  The track was in good condition at the begining, so basically we were going up the valley, following the river.  After a couple of hours we reached Steele Creek Hut.

The hut is basically a bivvy where it had coal sacks for lining the corrigated iron building.  It only had half a concrete floor, a fireplace and four bunks.  So one of the first things was to collect some firewood and water from the creek.  We also did a little viewing looking at the number of waterfalls that coming down the mountainside.  So we managed to get the fire going so we could keep warm and dry our wet socks.  We thought that we would have got the place to ourselves, but a lone tramper turned up.  Dinner was cooked and then waited for the light to fade to go to sleep.

Got up, had breakfast before getting going for our biggest day of the whole tramp.  From this point onwards the track is classed as a route, so a bit of navigation is required.  Managed to find the track along side the creek, which basically we were following if it existed and at times playing spot the orange markers.

As we were getting higher and started climbing while we were under the cover of bush.  Did a river crossing where we all linked up because there was a lot of water flowing.  Now the real climb started and bush bashing required as we gained a lot of altitude before we reached the river again, had a break to take in the view of where we were heading.  This required us to cross the river several times and bush bashing in between until we got above the bush line.  This is where we stopped for lunch. 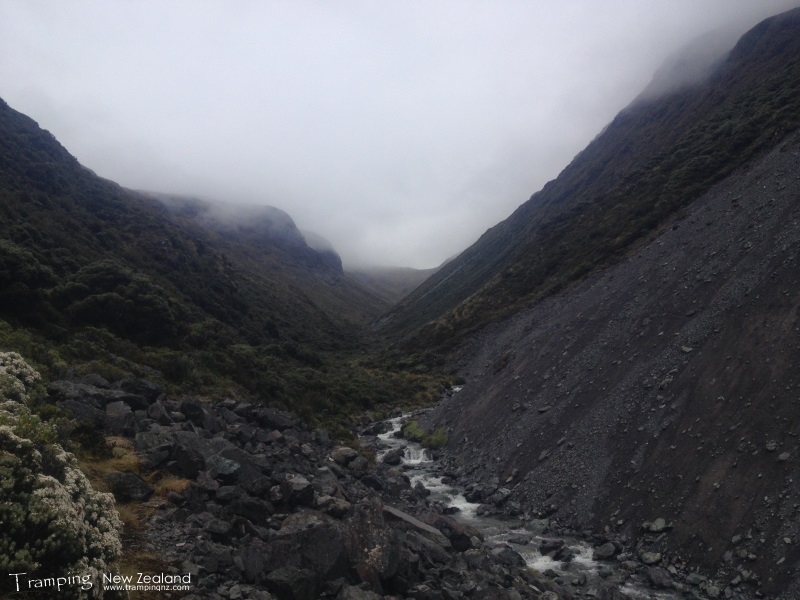 As we were climbing it started to cool down a bit and also getting into the clouds, so at this point it was following cairns and pole markers.  Finally we reached the saddle and we were totally in cloud.  Did not stay to long to admire the views, which could not see much of anyway and continued over the top.  Going down the otherside got quite steep and out of the clouds.  We noticed that there was a bit of air traffic going to/from Milford Sound and stange that we were looking down on them as we were above over 1300m, which is quite weird.

After the steep decent we reached the bush line where we had a break before continuing downhill to meet up with Caples Track.  A short detour off track took us to Upper Caples Hut that we booked.  One thing we noticed that there were quite a few sandflies (that's an under-estimation), so quickly explored around the hut before heading inside.  We managed to put a fire on and start preparing for dinner.  Tonight we had the hut to ourselves and could spread out.  After dinner we relaxed before heading to bed for a good rest after a big day.

Today was the shortest day, so we had a bit of a sleep in and relaxation in the morning.  Had lunch before heading off to Mid Caples Hut.  The sun was out in full force and such a blue sky day, so we admired the views as we were going down the valley.  Had a break halfway next to the river before continuing on.  Two hours later we reached the hut. 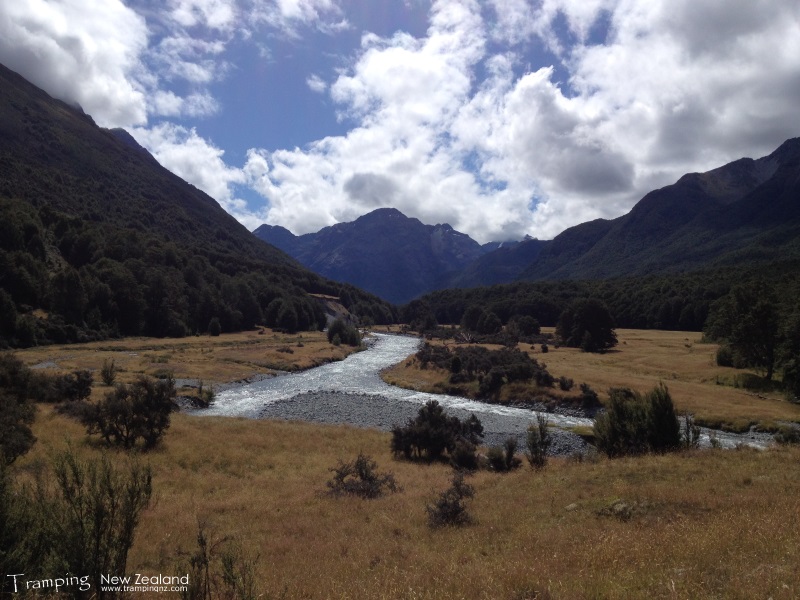 Once at the hut we soaked up the hot sun of the afternoon on the deck.  We cooked our last dinner meal and ate it on the deck.  Because the sandflies started biting, so we retreated inside to continue relaxing and reading magazines before heading off to bed just on dark.  The moon was out in force which lit up the valley quite nicely.

Last day on the track, it was sunny with a bit a cloud around, so it made it ideal.  Stopped by the Old Birchdale Homestead to look at the disrepair.  We were on the other side of the river opposite to the Caples Track, so we were basically going through farmland.  Got to the bridge that we crossed at the begining of the trip and you could notice that the river level had dropped.  So we did some further exploring up a side track as we had some extra time, which allowed to take in some views of mountains on the other side of Lake Wakatipu.

Finally we made it to the end of the track and our transport was waiting to take us back to Queenstown.  Once back in Queenstown we checked into our accommodation - Adventure Queenstown Hostel (http://www.aqhostel.co.nz), where we all got changed and had hot showers.  Then we went searching for some lunch, which we found Fergburger (http://www.fergburger.com) and enjoyed so much of being full.  So then we walked around town, checked out the waterfront.  Then we went to the Cookie Time shop (http://www.cookiebar.co.nz) and each of us got something further to eat.  Afterwards we went to get some supplies for the afternoon before heading back to accommodation to enjoy the sun on the deck.

After relaxing, we went out for dinner to The Cow (http://www.thecowrestaurant.co.nz) which is a pizza and spaghetti place, it was a very nice meal.  Then we headed back to accommodation to head off to bed.

The final day of the trip, basically packed up and went down the road for some breakfast.  Then the SuperShuttle (http://www.supershuttle.co.nz) arrived to take us all to the airport.  We then flew home to Auckland on Air New Zealand (https://www.airnewzealand.co.nz) flight NZ642, leaving at 11.10am and arrived at 1pm.  We then all went our separate ways home.