For the annual week long tramp, we headed down to Kahurangi National Park. I was joined by Vanessa, Andrew, Tim F, Tim H and Stuart.

We flew down to Nelson on Air New Zealand (https://www.airnewzealand.co.nz) Flight 5255, leaving at 7.05am.  Arrived in Nelson at 8.40am.  We then got a taxi-van to transport us to our accommodation (https://www.yha.co.nz/hostels/south-island-hostels/yha-nelson) for the night.

Once we had dropped off our bags we checked out the local markets that were on in the main street (due to Nelson Anniversary weekend).  We visited the DOC/iSite visitor centre to ensure everything is in order.  Soon afterwards we found a pub where we had some refreshments and lunch, plus we also worked out a menu for the meals for the week.

We then headed back to our accommodation to check-in and prepared ourselves to get the necessary supplies for the week.  First stop was an outdoors shop to hire locator beacon and get some gas.  We then walked round a few more outdoors shops as we were filling in some time.  Eventually we made it to Countdown to get all of the food, and then headed back to our accommodation to pack up all of the group gear.

Went out to dinner and eventually found a pizza place next to the movie theatre.  After this we retreated back to accommodation for an early night as we have an early start.

Woke up to a stunning sunny Nelson day, which had been forecasted for at least the first half of the trip.  We got ourselves prepared with a quick breakfast.  Then at 8am we were picked up by Trek Express (http://www.trekexpress.co.nz) to take us to Flora Carkpark at the start of the track.

The track started off easy and was wide, heading up and over Flora Saddle then down to Flora Hut which took the first ½ hour.  Then it turned into a tramping track following alongside a river, which we will become accustom to over the rest of the trip.

Along the track at well placed distances were these rock shelters, this allowed us to have breaks to recover from the heat of the day and to eat energy food.  Some of these shelters were really cool and we could have easily stayed overnight at any of them, in particular either the upper or lower Gridiron shelters.

Finally we broke above the bushline which allowed us to have massive views of the nearby mountain ranges including Mt Arthur.  Not that long after we reached Salisbury Lodge.  The hut was full to capacity.  As the evening went on the cloud started closing in, however it was still quite warm. 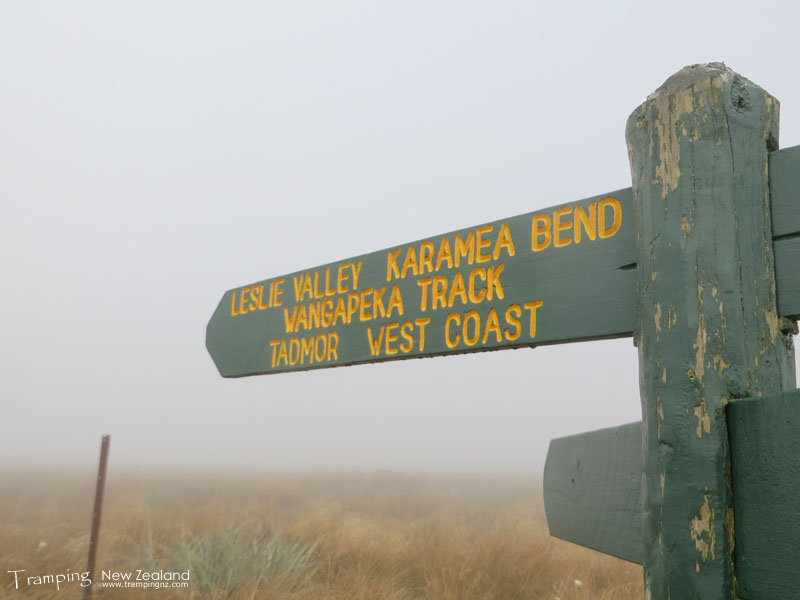 We woke up still being in the cloud.  So we headed off, with about 100m of uphill before we drop down about 900m into Leslie Valley today.  This was a fairly easy start for the first couple of km’s.  Then it was going downhill, where we got below the cloud, which it eventually burned off to give a sunny day.

Again like yesterday we came across a rock shelter at a convenient location, which have become great places for rest stops, however Splugeons shelter was the last of them that we would see on this trip.

Once in the valley we were now alongside Leslie River, which we followed all the way to Karamea Bend Hut.  Along the way we become friendly with the local birdlife including Robins and Rifleman which seemed to enjoy the human company.

We finally made it to the hut with quite a bit of the afternoon the spare, so we went for a refreshing swim in the river and a couple of us tried to do some fishing. 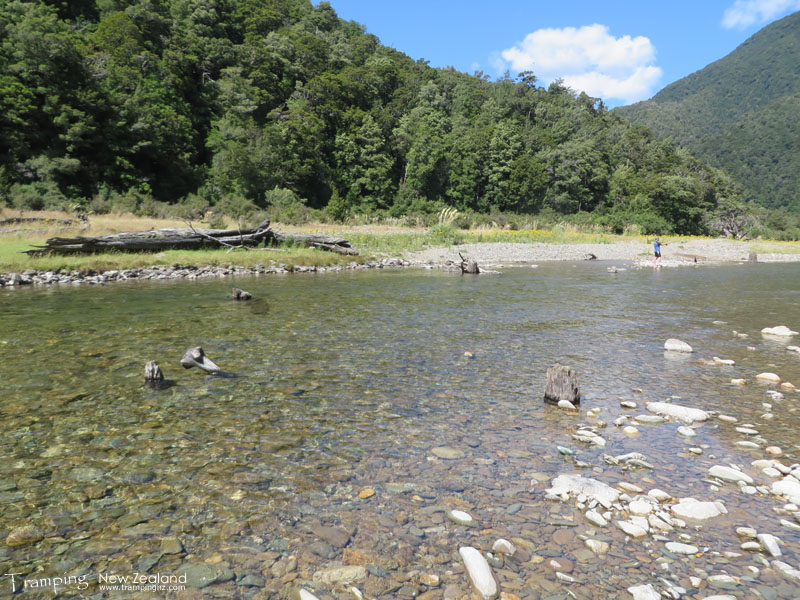 Today is another day where we follow a river valley, this time now being the Karamea River.  For the first while it was similar to yesterday when we were following Leslie River.  As we went along the track started getting a bit harder progressively.

At one point while crossing some of the riverbed we missed the track re-entry into the bush, which left us doing some rock hopping for a bit of change.  But then we realised we were totally off track, in groups of 2 we tried to get back to the track at different points, which lead us being all split up.  Now we had to put our navigation skills to the test to find each other again, after a short while we all managed to find each other back on the track.

We stopped for lunch at Crow Hut, where we had a couple hours break, while a some of the group wanted to have another go at catching some additional dinner; unsuccessfully.

Now the track is really hard to navigate as you need to concentrate of where you put your footing due to lots of tree roots and a lot of up and down, which zaps out a lot of energy in you.

Eventually we made it to Venus Hut, which is high up above the river and has a great view.  From the hard hot day of tramping we rewarded ourselves with some swimming in the river.  Tonight we played some card games and we also made the decision on which route option we were going to take over the next 2 days.

We firstly stayed close to the Karamea River today, this involved going over some rock ledges and from here you could always admire the view of how clear the water is and seeing the bottom.  It was a relative easy 2 hours to Thor hut, which is the last of the Forest Service Huts on the Leslie-Karamea track.

Still following the river but under a bit more bush for the next few hours.  Not long after I received a wasp sting in my right leg, which was painful.  This slowed me down a bit, however I did not seem to feel too bad about it, as it only left one more person in the group who had not been stung yet on this trip.

About 2km from Trevor Carter Hut we decided to take the true-right track option (sign posted), which gave a more direct route to Trevor Carter Hut and also to cut off additional hill climbing and distance.  This involved crossing the Karamea River, considering we have not had wet boots yet we decided to take the boots off for the crossing to keep them dry.  Once crossed put our boots on and followed the poled route to the hut through the swampy ground.

We reached Trevor Carter Hut and had a quick rest as we still had another hour and a bit to go.  We headed up the Lost Valley track, which was very overgrown so the track name makes sence.  We managed to get up the lost valley with the track more clearly defined as we reached towards the saddle.  Most of the group had run out of water by now, so luckly it was downhill to Helicopter Hut, where we were staying for the night.  However this took a lot longer than expected.  In front of the hut was the final river crossing of the day, at this stage we decided to walk through the river boots and all.

Had a quick dip in the river, but the water was really cold so it was less than a minute.  This is the first hut that we came across that did not have a water tank, so we collected a bucket of water and treated it.

Today there was a lot of river crossings to be had so we went boots and all through each of them, which is what we would normally do on a tramp anyhow.  Along the way you could see erosion to the sides of the river which would have been caused by flooding and earthquakes. 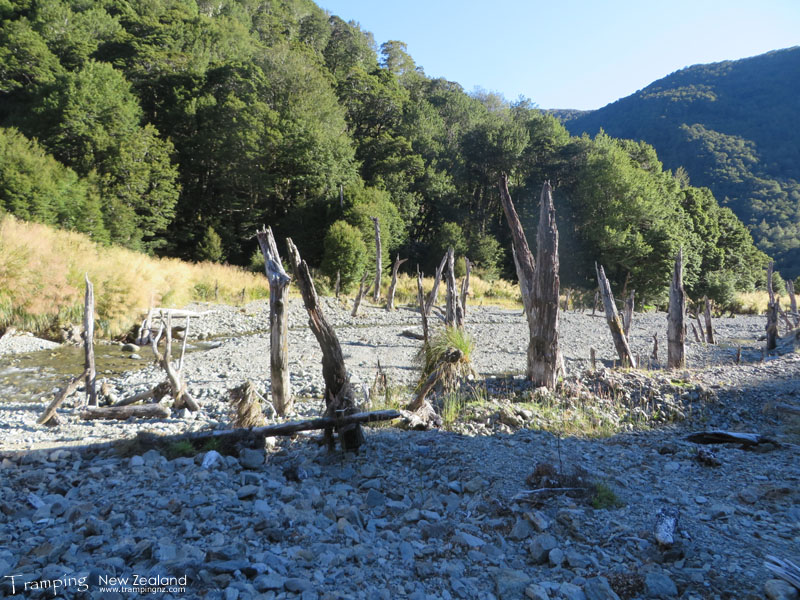 We were close to the river for quite a bit of the time, until we had a gentile climb up to Wangapeka Saddle (1009m), which took us into the Wangapeka River valley.  After a fairly quick decent we reached Stone Hut, where we had a lunch break.

Initially we followed the river again before the track started taking us high above the gorge of the river, this made a fairly clear, flat track which meant that our pace picked up quite a bit while heading to Kings Creek Hut.  There was nice views down to the river below, but you had to be careful of not getting too close to the edge.

Finally reached Cecil Kings Hut, which has been well preserved and was quite impressive, since it was built in the 1930’s.  However the hut we were staying at was located about 5 minutes away.

Last day on the track, it was fairly cloudy, which made it ideal as it was not too hot when compared with the rest of the trip.  We were lucky that the weather had been better than predicted.  Again the track hugged alongside the river and the valley opened out as we headed to Rolling River junction, so it was a easy track.  However we had to navigate a rock slide, which was the only major obstacle.

Finally we made it to the end of the track and it started raining.  So we found a shelter down the road where we waited for our scheduled pickup to be taken back to Nelson.  On the way back to Nelson we stopped at Tapawera for lunch.

Once arrived back to our accommodation we all got changed and hot showers.  Then we went searching for a pub for an early dinner, which we found and enjoyed the evening.  Afterwards we went to supermarket to get some snacks and breakfast.

My final day in the South Island, had a sleep in and a cooked breakfast.  I then packed up before we went out and exploring the city centre of Nelson.  I then got a shuttle to the airport and flew home to Auckland.