For a week long tramp, we headed down to Kahurangi National Park.  This ticks off one of the well known tracks on my bucket list.  I was joined by Vanessa, Andy, Jeff and Tim F.

We flew down to Nelson on Jetstar (https://www.jetstar.com) flight JQ375, leaving at 1.05pm.  Arrived in Nelson at 2.30pm.  We then got a taxi-van to transport us to our accommodation at YHA Nelson (https://www.yha.co.nz/hostels/south-island-hostels/yha-nelson) for the night, which took us the scenic route.

Once we had dropped off our bags we wondered down the road to catch up with Andy and Jeff where they arrived a couple of hours earlier from Wellington at a local bar.  We chilled out for a bit until Tim arrived due to his flight been delayed.

We then went for a walk to the supermarket to get our food supplies for group and individual catering, once done we headed back to our accommodation to pack up all of the group gear.

Went out for dinner where we had a nice meal and then went to bed as we have an early start.

Got up early and headed down to the DOC/iSite visitor centre to be picked up by the Heaphy Bus (https://www.theheaphybus.co.nz).  Since we had a bit of time we managed to get some quick breakfast from BK across the road.

Got on the road and the weather forecasted rain started pouring down as we headed over Takaka Hill towards Collingwood.  Had a rest stop at Takaka before continuing onto the road end.

Arrived at the road-end and the bus was unloaded and the wet weather gear was put on.  Headed to Brown Hut (about 5 mins away) to where the start of the track was.  At Brown Hut, made a few pack adjustments, sign the intentions book and then we were away.  You could see that Aorere River was in full flood, which was anticipated in the forecast of over 100mm of rain in a 6 hour period.

So we headed uphill along the track, which was of a good quality.  So we just set a pace that we could handle in this weather.  Along the way you could see water falling down in many places creating waterfalls.  Also there were a few stream crossings which were roaring with water, which we had to take care with crossing.

After 5 hours we reached Aorere Shelter, it was a well earnt break to eat some energy food and to be dry for a little bit.  The rain had eased a bit but upon leaving the shelter the rain started to get heavier again.

Finally we managed to reach Perry Saddle Hut, which we will be staying at for the night.  Once found an available bunk, got changed into dry clothes and put the wet clothes out to dry.  Then we had dinner which Andy had pre-made prior to the trip.  We relaxed for the evening and then headed to bed.  Outside was blowing a gail and pouring with rain.

Woke up and we were surprised that the sun was out and the cloud burning off.  No rain in sight, so it must have blown through quicker than anticipated.  No complaints here, putting out the not yet dry clothes into the sun.

Had breakfast and a late start on the track.  We took it fairly casually at an easy pace as it was one of our shorter days.

At first it was basically heading a slight downhill following Perry Creek.  There was some nice bush and small stream crossings.  It then opened out to Gouland Downs.  At this point there was a picnic table on the side of the track, we used this to have a rest and admire the view.

There is quite a lot of bird life around, especially Weka and Robins, which at any chance we could get close enough to take photos.  Continuing on, we reached Gouland Downs Hut, this is where we stopped for lunch in this nice spot. 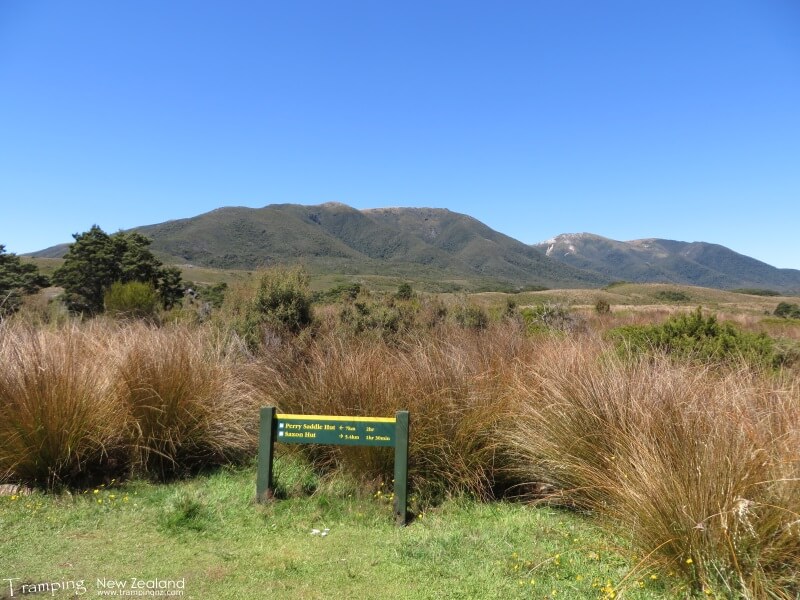 After lunch we continued on, and stopped to explore some of the caves which were just off the side of the track.  Going through Gouland Downs, its tussock land, the sun was bearing down on us with the intensity of its heat, which made it hard going and trying to find shade difficult.  This took a lot of energy out of us.

Finally we reached Saxon Hut.  This has a good view of Gouland Downs and where we came from.  We went down to the river nearby to have a dip and relax.  Afterwards we cooked up dinner and enjoyed the outdoor dining.  The cloud started rolling in around the hills as we headed to bed.

Got up, had breakfast and then packed up as we had a full on day ahead of us.  Today is our biggest day, as we had to cover a lot of distance due to wanting to stay in a hut that is less flash.

Followed up a valley, which then had some uphill to get up onto a ridge.  This took us a while, it was a gentile climb.  As we approached the top we got our first glimps of the west coast and the surrounding area.

Going along the ridge there were some quite unique landscapes with the bush mixed in with the tussock.  Along with some big massive rocks and boardwalks over the wet lands.  There were also some bridges crossing rivers. 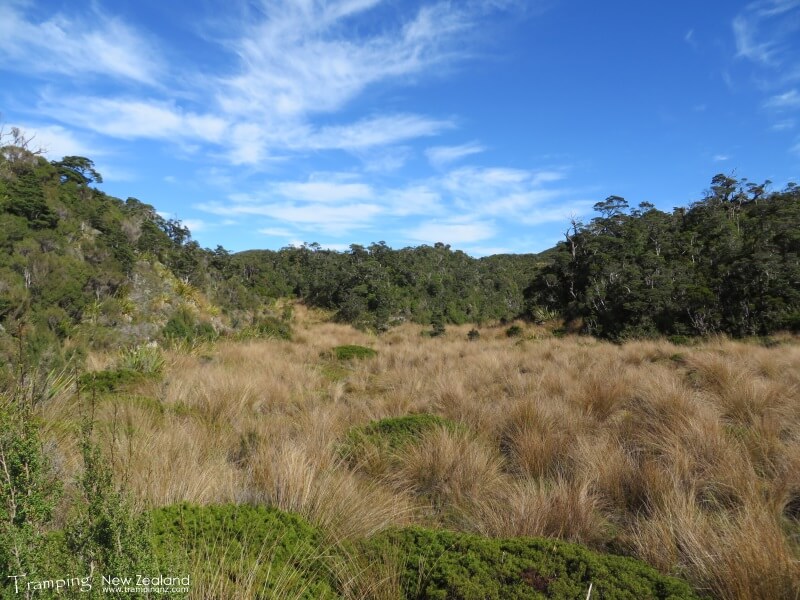 By lunch time we reached James Mackay Hut, which we stopped at.  This is the first hut we encountered on the west coast side, which contained flush toilets that was practically joined onto the hut, so could not pass up the opportunity.  The views from the hut deck was amazing.  We could see right down the valley to the Heaphy River mouth, which we will get to tomorrow.

Put our boots back on and continued onto Lewis Hut, which is our destination today.  Basically from this point it is all downhill, which is not very easy on you knees for hours.  Especially when you can see how high you are above the Heaphy River and how far down you need to get to.

We finally arrived at Lewis Hut all sore.  We had a look at the massive Heaphy River bridge, before finding a spot on Lewis River for a dip in the cold water to cool us down and ease the pain.

It was basically ourselves to the hut tonight.  Had dinner and then went to bed.

Today is our shortest day, we had breakfast and packed up to head to Heaphy Hut.  We decided to go early, so we could relax more at Heaphy Hut and get first dibs on beds.

We were following the river all the way to the hut, there were quite a number of bridges that we crossed.  As we were going along you could see the change in vegetation, where there are nikau palm trees, so more tropical like, with the temperature to match.

After a relative flat walk alongside the river we arrived at Heaphy Hut.  It had a massive lawn out the front, and deck with the view of the river mouth out to Tasman Sea.

We had some lunch and chilled out a bit for a few hours.  We went out for a walk to the river mouth, where there was nice sandy beach and as a bonus some mobile phone reception.  We enjoyed the environment watching the sea and the view of the west coast. 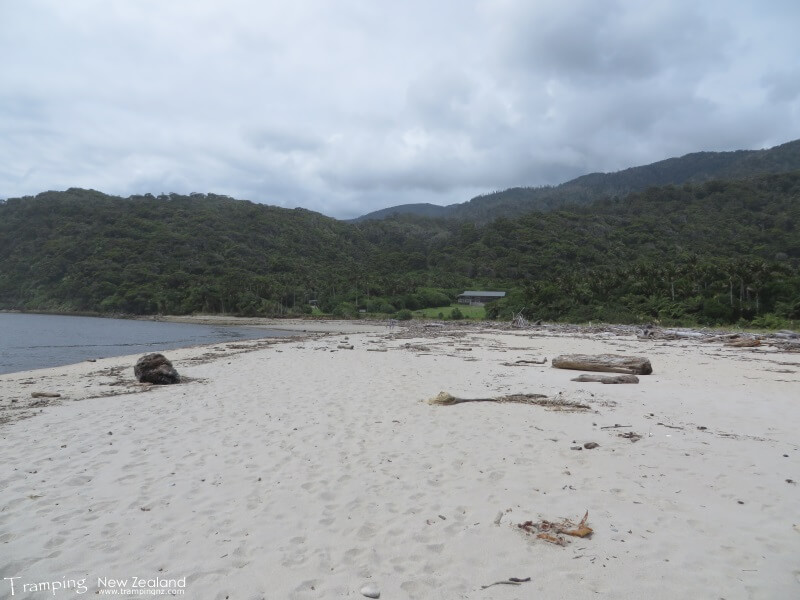 Once back at the hut, it started to fill up.  After a while we cooked dinner and then we went outside to enjoy the evening.  We went down to the end of the lawn and sat on the edge by the river, where we watched the sun go down, which was quite romantic in a way since it was valentines day.  Then we headed to bed.

Our earliest start, since this is the final day on the track.  We had breakfast and got on our way.  Basically we were following the coast all the way to Kohaihai, where we have bus transport picking us up.

My laces on one of my boots gave way at the end of Heaphy Beach.  I managed to tie the ends together, to allow my laces to still be laced up (using one less eyelet), without having to replace it.  When I was doing this my arm got covered in sandflies, so tried to do this as quickly as I could. 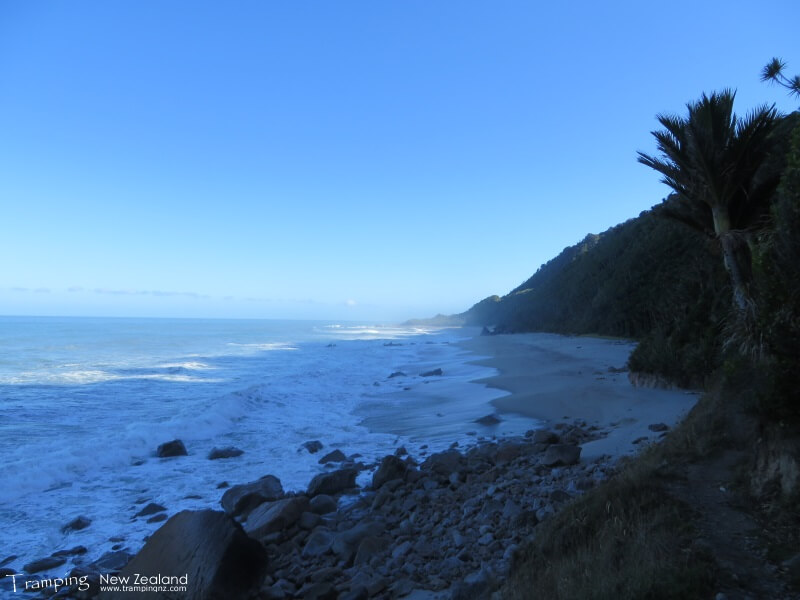 Each beach was different, it seemd to alternate between sand and rocks.  There were a couple of rivers had to cross which most had bridges and sometimes the track when up cliff faces.  It was high tide, so we could not go along the beach, so we stuck to the track.  We were making good time today within our estimates.

The bus was late picking us up, we had a stop in Westport before continuing on to Nelson.  We arrived back in Nelson at 8pm, where we walked to our accommodation.

We all had a shower and then we went to a pub for some dinner before going to bed, it has been a long day.

Today had a bit of a sleep in.  Jeff and Andy left first as they had flights to catch, so this left Vanessa, Tim & I.  We went to have breakfast followed by having a look at some shops in the main street and then checked out of accommodation.

Tim and myself decided to do a little exploring and we found the centre of New Zealand, not knowing this involved going up a hill, which was not a great thing to do.  Then went back into town and looked at more shops before I headed to the airport to catch my flight home to Auckland.