Due to being Queens Birthday weekend, we headed down to Whirinaki Forest Park to complete the remaining track and hut that we had not done in the area.  I was joined by Vanessa, Chris S, Staci, Tim F, and Stuart.

To make most of the weekend and plus ensure we get to track transport, we left Auckland on Friday night.  After a few issues we were on our way.  After midnight we arrived at Lake Okaro campsite, about 20 minutes out of Rotorua, where we setup tents and then went to bed.

Got up and had some breakfast in this nice setting before packing up our tents and heading to Te Whaiti for our track transport.  However there was a catch, the road was closed due to storm damage and is not due to open for another month.  However from advise from our track transport, there is a detour via forestry roads.  After finding the entry point for the detour which was for use of locals only, we continued on our way.  This added quite some time to our travel.

Chris & I dropped off the rest of the group off at the start of the track so they can have a head start.  We then headed to our track transport and we then got dropped off at river road-end.  So we headed off to Central Whirinaki Hut, this was mainly following a benched track by the river which was quite easy and we caught up with the rest of the group just after the bridge crossing Managamate stream.  Further along we had break at Vern's Camp where we stopped for lunch.  We continued onto the hut.

We were approaching the hut in darkness.  In the tunnel just before the hut we had a look at what life existed there, which included weta's.  Once at the hut we had dinner and then bed.

Today we head to Mangamate Hut, this involved following along side or in the river.  Followed the track to Taumutu Junction and this is where turned off to Mangamate Stream, which will take us to the hut.  The track was not the easiest but we managed to the hut in good time for dinner (as we sent a couple of the group ahead to start preparing).  Had dinner then went to bed. 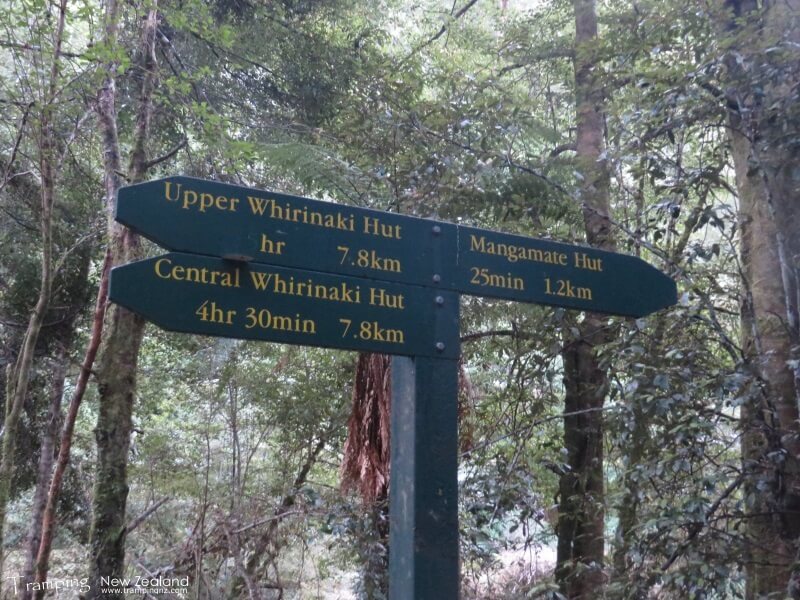 The final day, started early.  Firstly it was heading down ridge from the hut and then the track headed straight down to the river.  There were quite a lot of obsticals which made it slow going.  Finally the river opens out, we stopped and evaluated our situation.  It was determined as a whole group were not going to make it to the track end by the time the track transport arrives.  So Chris and I were sent on to meet up with track transport.  This is when we followed the river as it snaked down the valley.  We got to the bridge crossing where we needed to head out of the water and onto the track to the road-end.  We ensure that the track markers were visible as there had been some storm damage.

We got to the road end with about 1/2 hour to spare before the transport arrived.  We also came across the group that did the same route as us, but the opposite direction.  We got picked up and taken to where our cars were parked.  We then headed back to the road-end with our cars.  We had some lunch while we waited for the rest of the group arrive which was some 2 hours later.

As it was starting to rain we headed back to Auckland via the forestry road.  We stopped in Rotorua for dinner before continuing home.