For the annual week long tramp held over Auckland's Anniversary weekend, we headed to the Te Urewera National Park, more specifically Lake Waikaremoana area. I was joined by Jamie, Ryan, Angus, Alistair, Trevor and one other.

Warning: This tramp should be only be attempted by experienced trampers, due to the tracks not cleared of snow damage and increases difficulty. See track safety notice.

Left Auckland at 9.00am to head to Lake Waikaremoana Motor Camp in Te Urewera National Park which is an 8 hour drive. Firstly we stopped at the BP station on the southern motorway, to wait for the other vehicle to arrive.

Traveling in convoy did not last long where the two vehicles headed in different directions to Matamata, one via State Highway 2 and the other via Tahuna. The outcome of this has been debated for years but finally we have winner - State Highway 2.

Arrived in Matamata and had lunch at a fish and chip shop. Once eaten we continued on to Rotorua. Arrived in Rotorua about 40 minutes later and stopped at pak 'n save to get the last supplies, so most of us had a luxury ice cream. Filled up vehicles with fuel before heading on to Aniwaniwa.

Once we headed into Te Urewera National Park, State Highway 38 turned to a gravel road, which we followed for the next two hours. At 4.45pm we reached the DOC Aniwaniwa Visitor Centre but however it just closed, so we could not buy backcountry hut tickets required (however did talk to the staff and notified them of our intentions). So we continued onto the motor camp down the road.

We setup our three tents on a tent site and then we played cricket for an hour before cooking dinner in the communal camp kitchen, which had a nice view over Lake Waikaremoana.

By 8.30pm we headed to our sleeping bags as we have to start our tramp tomorrow.

Today we woke up 6.00am, had breakfast and got packed for our three day tramp. At 8.20am we were picked up by organised transport (Lake Waikaremoana Motor Camp hosts), to take us to the start of the Manuoha Track.

After a few minutes, we started seeing the damage that had occurred (note DOC has not cleared the track), with big massive trees down over the track and we had to navigate round them without loosing sight of the track, which was difficult in places.

While heading up the steepest part of the track, it took a long time which slowed us down considerably, especially involving getting round the snow damage. Once on to the ridge, we continued heading uphill navigating our way carefully with the aid of topo map, GPS and bush bashing skills. A couple of times we did loose the track; however with our tramping skills we managed to locate it again. For a short period the weather cleared up a little bit, allowing us to have a lunch break before continuing on. 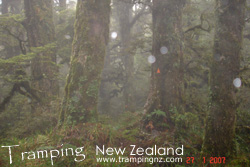 While going up the ridge we could see the "goblin" forest, where there were a lot of mosses on the forest floor and in the trees. The track took a sharp right turn away from a land slip, went through a tunnel of bush loaded with wet leaves and soaked us right through.

Made it up to the trig point, the highest peak in Te Urewera National Park. We were unable see much because of cloud and rain, which has existed all day. Then we headed down to Manuoha Hut (6 bunks) for our night's stay. The track took us 8 hours, instead of the indicated 6 hours.

At the hut we stripped off our wet clothes into clean dry ones and hang our wet ones to dry. The weather closed in while we were cooking dinner and soon went to bed at 7.00pm.

Overnight we were all crammed together on the sleeping platforms, the weather did not improve, woke up to misty rain and cloud at 6.00am. Had breakfast, then put back on our semi-wet clothes and packed up to head to Sandy Bay Hut. Today is meant to take 8 hours but due to conditions experienced the previous day, we estimated to take 10 hours.

From the hut, we had to navigate snow damage with big trees over the track again. As we headed downhill at a steady gradient at one point we discovered a pair of steel capped boots and socks (how random in the middle of nowhere), we left them where they lied.

Later in the morning eventually the mosses gave way to small ferns on the forest floor, which started scratching our legs quite badly. It made our legs raw and some of us bleed.

Soon after lunch it was my turn to become the trailblazer for the rest of the day. This meant I had to go head on with the ferns legs first, navigating along the track around fallen trees. Passed the silted lake bed and continued downhill to Sandy Bay Hut which only took us 7 hours 55 minutes.

Once we arrived at the hut, the sun came out for the afternoon, which allowed us to dry out some of our gear and relax on the deck of the hut or on the grass. Took a paddle in the waters of Lake Waikareiti, where the bay was shallow and I managed to walk out to knee height (about 50m from the beach). 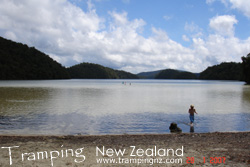 Sandy Bay hut was booked full and with a few camping in tents also. Cooked dinner and relaxed for the rest of the evening until the sun set when we went to bed.

Woke up 6.00am to an overcast morning, had breakfast then got ready and left at 8.15am (two of the group left at 7.20am). Today we are heading back to Lake Waikaremoana Motor Camp via Waikareiti shelter, which is expected to take 4 hours (the first two were going via Waipai / Ruapani Track expected to take 7 hours).

Tramped from Sandy Bay Hut to the junction of Waipai / Ruapani Track, that took us inland from the lake, through small valleys, which took 1 3/4 hours (first two took 1 1/2 hours). The overcast rain cleared up with the sun starting to come out. At the junction had a break before continuing on.

The next part of the Lake Waikareiti Track goes through beech forest, that had nice views of the lake. Once at the bottom of the lake, we soaked up the views at the shelter before heading downhill along a well formed wide track (very hard on your feet) at a gentle gradient down to the exit point.

At 11.45am crossed the State Highway 38 gravel road and waited on the bench for the group of two to come out from the longer track. Just after 12.00pm they came out (those two expected that they would bet the main group). Once re-grouped together, we headed down to the DOC visitor centre to pay for backcountry hut passes and after this we continued down the road back to the motor camp. 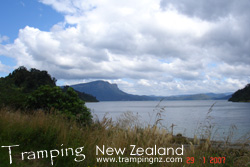 Back at the motor camp we all got refreshed with a shower, then ate lunch and played card games for the afternoon (the sun was very intense outside). Cooked dinner and continued playing card games until the light faded at 9.00pm.

Overnight it turned to rain again, got up at 6.30am and had breakfast. There was a slight break in the rain after breakfast which allowed us to pack up our gear and tents. Started heading home at 7.30am via the State Highway 38 gravel road to Rotorua. We did not stop in Rotorua and continued onto Matamata where we stopped for lunch.

After lunch we continued on our tradition by stopping at Pokeno for big ice creams before heading back into Auckland. Arrived home at about 2.30pm.