For Queens Birthday weekend, I decided to check out what was my first multi-night tramp again. I was joined by Chris S, Staci, Chris L, Abigail, Kirsty and Emily.

Today we left Auckland very early in the morning as we have a big day ahead of us.  On the way we stopped in Tirau for breakfast before continuing on to Rotorua.  Once through Rotorua then it was onwards to Lake Waikaremoana (note this requires a couple of hours of slow gravel road driving).  We stopped in Ruatahuna for a break.  Some 9 hours later we arrived at Onepoto where we unloaded car, sorted out our packs and had lunch.  Once ready we were off uphill towards Panekire Hut.  This is a long uphill along Panekiri Bluffs, every now and then we stopped and admired the amazing views. 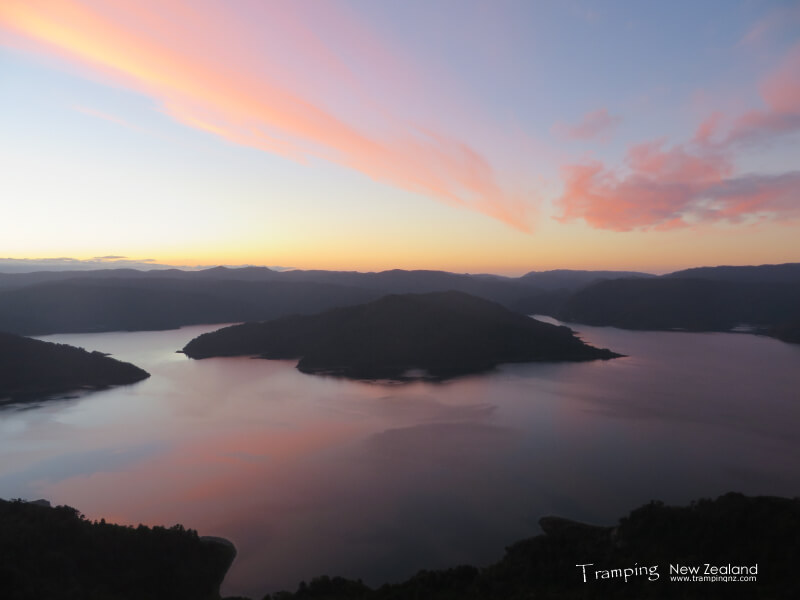 Just as the sun was setting we reached Bald Knob, where we took in the amazing view.  It was then time to put on a warm layer and turn our torch headlamps on.  Continuing in the dark we finally reached the hut.   We sorted out our bunks in the hut before cooking dinner, once eaten we went to bed as it has been a long day.

This morning we woke up to a sunny day.  The ground around the hut was full of frost and had an amazing view of the lake.  Had breakfast and then packed up ready to head downhill off the bluffs.  Today is going to be a big day as we had quite a bit of distance to cover.  The track goes down at a gential gradient with pockets of views.  From time to time there were steps over the steep bits.

We reached Waiopaoa Hut in about 2.5 hours which was quicker than 4 hours on the sign.  We stopped and had an early lunch before continuing on. From now we were basically following the lake edge for the rest of the trip, so it is relatively easy.

We bypassed Korokoro Falls as we would not have enough daylight to do the side trip.  By early afternoon we stopped at the edge of the lake where most of us went for a swim.  This was quite refreshing and also being able to admire the views over the lake.  With our dry clothes back on we continued on.

Coming round to Maraunui Bay there was a little bit of hill to go over and also a bit of a dog leg before making it to the campsite.  We reached the campsite before dark, which is what we were hoping for.  First of all we pitched our tents before getting changed into warm clothes for the night.  It was now dark and we were cooking dinner in the shelter.  After dinner we headed to bed.

An early start today as we have another long day ahead of us.  Had breakfast and packed up.  It was overcast with a few drips of misty rain.  You could see the clouds hanging around the hills.  Once we got going we got warm, so it was not too bad.  Today there was quite a bit of hill bits as we crossed some peninsulas, rather that going round the lake edge (although we were still following the lake edge also).

We stopped at Waiharuru Hut for our morning break as the deck was covered.  Then continued on over the big hill of the day that required to go through a saddle.  Once down the otherside it was follow the lake edge again.

We reached the water taxi pickup location prior to scheduled time.  So we had lunch while we waited for it to arrive.  The two car drivers then boarded the water taxi so they could then collect the cars from Onepoto.  While the rest of us tramped out to the road-end at Hopuruahine Landing.  There was was last hill of the day before we reached some farm land which we had to cross.  Eventually we made it to the big bridge to where our drivers were waiting for us.

Today was a chill out day, left accommodation and went to Fat Dog Cafe for breakfast.  Then most of us went to our booked activity of White Water Rafting, which was awesome.  Had some lunch and then headed home to Auckland.