On 16th December 1999 Awatuna Venturers set off to do the Lake Waikaremoana Tramp that will last 4 days. We set off early Thursday morning to our destination. We stopped off at Rotoura for morning tea, and continued down to Lake Waikaremoana. 6 Hours later we were dropped off by our venturer and scout leader and parent at the starting point. The adults continued to drive down to the carpark. They caught the water taxi to the first night's campsite. The Venturers had a 4 hour hike to get to the camp site. (Chris nearly collapsed in the last 1 km) 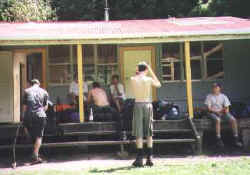 Some of the Venturers were so tired and hot we went for a swim. We basically had an easy evening and went to bed. 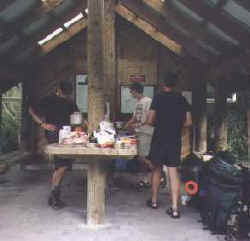 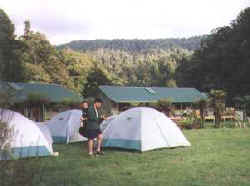 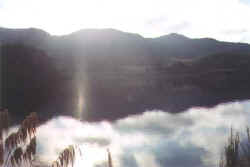 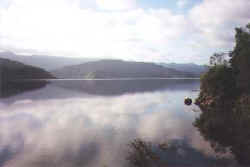 As same for the next morning the adults left the camp site at 8.30am and then followed by us Venturers at 9am. It was planned a 18km tramp which was relatively easy, but often tiring. This was the longest distance that we covered in a day on the tramp, and it did have consequences. Marc's leg became partly fractured about 1/2 way through the day. The Venturers managed to catch up the adults at a camp site, where they were resting. Marc was lucky to get a boat ride to the next camp site, while we had to tramp for another hour to get there. That night we meet up with a couple of families and also some of us were lucky to have toasted marshmallows, supplied by them. Meanwhile the Venturers had to decide what was going to happen to marc for the rest of the tramp.

The Venturers decided that we send marc back to the carpark, so Laurie, Kelvin & Daniel got a water taxi to go to the car park. And go home. (They took our tents too as we did not need them for the last night)

Today was a steep mountain climbing day. Most of the day was up hill and exhilarating. But will amazement we reached the hut at the highest point of Lake Waikaremoana by 2pm. So we basically rested for the afternoon.
A call for help came about 4pm from the family of 16 persons that we met yesterday, they got stuck about 10 minutes from the hut. So we pitched to help them by carrying their packs for them. They thanked us for that.

That night the Alistair and Ryan did a couple card tricks to the people who stayed in the hut with us, everyone enjoyed that. 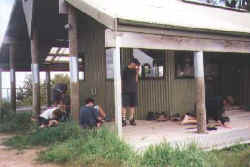 At 6am everyone got up to a bad day, where the weather was misty, cloudy and rainy. So we all quickly had breakfast and started to make our trek down to the carpark before the weather worsened. Because of the weather we split the group into two, each with one adult. First group left at 6.30am and the next 20 minutes later. At the major stop with the rock ledge the first group was an hour in front of the second group. 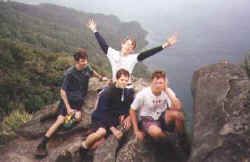 When we got down to the bottom the weather was not so bad. Surprisingly the first group waited for the second group. Also there was a note in Boxy. Laurie saw that Boxy had a flat tire so he spent the day going to the nearest town (Rotoura) to get it repaired. So he did not leave the carpark until last night. We all went to McDonald's for lunch in Rotoura. And got home about 5pm.