For labour weekend, we headed down to Egmont National Park. I was joined by Chris S, Staci, Nathalie, Tim S and John.

We left Auckland at 6.00am to head down to Inglewood which is a 5 hour drive.  We first stopped at the motorway BP service station heading south to meet up with John and shuffle cars round.  It was a nice drive down.

We stopped in Inglewood where both cars meet up and had some lunch at a cafe.  Soon we were heading up to North Egmont Visitor Centre.  Once arrived we sorted out our packs with the group gear then put them on and headed to Holly Hut.

To start off with we headed up the Razorback which was a bit of a climb before leveling out going in and out of the valleys along the mountain.  Due to the fine weather we had some awesome views.  We managed to come across some small patches of snow, but most of it was still above the bush line which is above where we will be during the weekend.  We had a few energy stops along the way before we headed down to Holly Hut which was overlooking Ahukawakawa Swamp.  Some 3.5 hours later we arrived at the hut and found beds available. 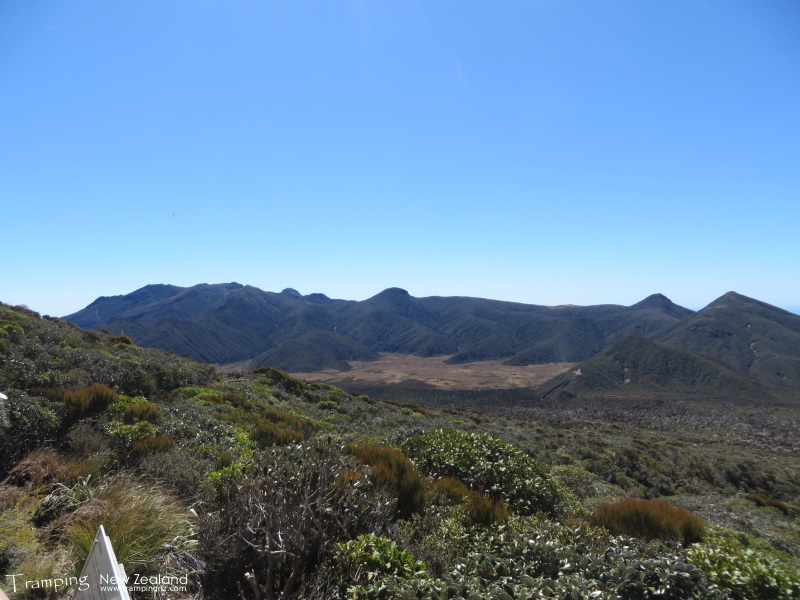 For the rest of the afternoon we relaxed for a bit.  After a while we decided to go for a side trip to Bells Falls to take a look at the waterfall and a bit of a dip.  This took about 1/2 hour to get to and was a great sight.  Some of us decided to go for a dip in the cold water.  Once back we had noticed a lot more people had arrived at the hut and quite a number of tents being put up.  Lucky we got in when we did.  We estimated that there would have been 60-70+ people here which is pretty hard to comprehend and insane.

With the vast amount of people around, we decided to cook and have our dinner outside, which turned out to be a nice evening.  Afterwards we headed inside and tried to enjoy the fire until it was too hot, so we went out and did some star gazing as the sky was clear as.  We saw a couple of shooting stars.  Then we headed to bed.

This morning we took it lazy as it is only a short day and with most of the crowd moved on.  The weather was another nice sunny day.  Once we packed up we headed to Pouakai Hut at 9.35am.  First of all it was heading down to the swamp and crossing it, which gave us awesome views of Mt Egmont/Taranaki.  Then it was uphill to get onto a ridge, which was a bit of a climb.

Once on the ridge we took a bit of a detour onto the track for Pouakai Trig, where we stopped to have lunch with amazing views in all directions, you could even see Mt Ruapehu in the distance.  We left our packs and headed up to Pouakai Trig.  Once at the top, it clouded in, after a bit of a rest we headed back down.  Collected our packs and continued on to Pouakai Hut, which we reached in the early afternoon.

At the hut we meet up with the hut warden that advised us that the hut was full, since we were prepared for this with our bed rolls we took the option of sleeping on the floor, which we knew was quite a possibility.

For the rest of the afternoon we relaxed on the deck of the hut.  As evening came along we cooked up dinner and enjoyed the nice fire before going to bed.  At least tonight did not have crazy amount of people.  It had also clouded in a bit, so no star gazing.

Today is the big day, waking up early, packed up and left the hut just after 7am.  We had 6.5 hours of tramping in front of us and 5 hours of driving back to Auckland.  Since the sun was still getting up, we had some nice views, but there was cloud surrounding Mt Egmont/Taranaki.

One thing that I have not got over on this trip is the amount of board walks and today is no exception.  First of all it was heading to a small tarn beside the track, this is the one that can get nice reflection photos, however it did not reflect for us today.  Then we continued along Maude Peak.

Next we had to tackle the climb up Henry Peak, pretty much straight up including ladders, which is the highest point of the day.  We stopped at the top for a quick energy break before continuing on.  It was now all downhill to Kaiauai Shelter, this was not easy, quite a lot of it was board walk / steps but often it was difficult to judge / focus to where to put your feet as sometimes the board walks were stacked 3 high to make steps.

Now it was in and out of valleys and heading back up to North Egmont Visitor Centre.  The track was more of a tramping track standard now with the odd board walk.  We stopped by a stream for lunch before the final up hill to the finish.

We reached North Egmont Visitor Centre just after 1.30pm, earlier than we were expecting which was great.  So we got changed and had a look inside the visitor centre before starting to head back to Auckland with 5 hours driving.  We stopped off on the way for some dinner.  Surprisingly we did not encounter any major traffic issues on our arrival into Auckland.  We all had a great weekend.