For a practice for upcoming week long tramp, we headed down to Egmont National Park. I was joined by Vanessa, Chris R, Simon, Andrew, Tim F and Tim H.

We left Auckland at 6.30am to head to New Plymouth which is a 5 hour drive.  It was not a bad drive down as it started off as quite a nice day.

Both cars meet up in New Plymouth where we got our last supplies and some lunch.  Soon we were heading up to North Egmont Visitor Centre.  Once arrived we went into the visitor centre to purchase our hut tickets before getting prepared for weekend of tramping.

We put on our packs and headed to Pouakai Hut.  This is the longest day of our tramp as we have to cover the most distance, which was about ½ of the Pouakai Circuit.  Firstly it was heading down the mountain, which was mainly along a ridge, this was a pretty good start.  The weather was sunny and warm, however we knew that the weather is expected to turn for the worse.  We crossed a swing bridge where we go the best view of Mt Taranaki for the whole weekend.

Next we headed to Kaiauai Shelter, there is where part of the track evened out and starting the head uphill.  We had a rest at the shelter before tackling Henry Peak which is the highest point of the day.  It took us quite a while to make it up to the top, as it slowed us down quite a bit.  Once at the top we had a rest.  By now the weather had turned.  However we continued on as darkness fell and the weather got worse.  Finally we made it to the hut by torch light about 8.30pm.

Once at the hut we cooked up dinner.  The hut was full, so we were forced to sleep on the floor, which we were prepared for as we had our bed rolls.  Soon we went to bed.  I did not get a very good sleep as it was very windy and rainy outside which shook the hut constantly.

This morning we took it lazy as we had only a short day.  The weather had eased a little but still a bit of wind and drizzle.  Once we packed up we headed to Holly Hut at 9.45am.  Headed uphill a little then round a bit before heading down a ridge.  This took us down into the swamp, which we crossed.  Finally it was a slight uphill out of the swamp then a river crossing to the hut.  As we arrived at the hut the rain started to bucket down, so we were lucky.

Had lunch and had a lazy afternoon by playing card games and nap to catch up on lost some sleep from the previous night.  We put the fire going which took quite a while to heat up the hut.  There were plenty of beds, so no floor tonight, also this hut had solar lighting.

We cooked up dinner and played more card games before heading to bed. 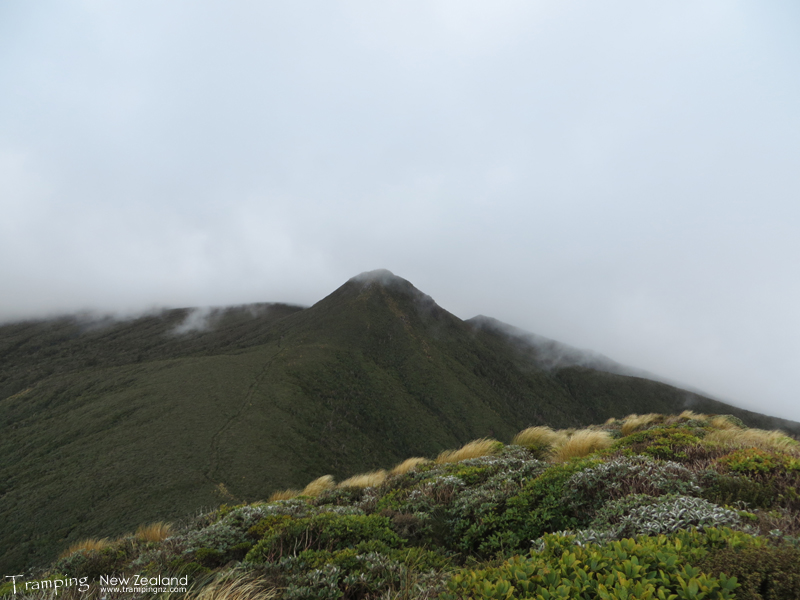 We woke up to a day of improving weather.  We packed up and left the hut at 8am.  We decided to do the high route back to the visitor centre.  This involved going uphill gaining about 300 vertical metres.  A lot of this involved going in and out of the heads the valleys as a gradual climb.  This allowed to give some good views of the surrounding area that was not obscured by cloud.  At some points there was some snow/sleet falling on us.

We reached the Boomerang Slip where we had to cross one at a time as there was loose scree/rock.  Continued on before heading down the Razorback.  This finally took us down to North Egmont Visitor Centre to where we started the weekend.

As we exited we were greeted by a TV3 reporter, who advised us that there was a tragic accident at the top of the mountain due to the weather.  So we got interviewed and some camera shots of us.  We made the 6pm News (see video at 2 minute mark).

Arrived at the carpark, we took our packs off and got changed.  Then we headed into New Plymouth where we had BK for lunch.  Once finished we then headed back to Auckland with 5 hours driving.