For Queens Birthday Weekend, I decided to check out the Umukarikari Range in the mighty Kaimanawa's again. I was joined by Vanessa, Chris S, Staci, Stuart, Abigail, Bradley, Tim S and Nathalie.

Warning: This tramp should be only be attempted by experienced trampers, in the summer months due to the difficulty in winter months.

Today we had two cars leaving Auckland at different times; I was in the earlier car.  After arriving at the pickup location and picking up everyone else on the way, we hit the famous getting out of Auckland for long weekend traffic jam.  Once past the congestion we were on our way south.  We stopped in Cambridge for dinner, which took a while, however we were not in a great rush.

We continued on making our way down south to the Desert Road, where we turned off onto Kaimanawa Road.  Now we searched for a suitable campsite to setup tents for the night, which we found that Urchin campsite to be the place.  So we started setting up all of the tents (this was the condition of being the earlier car).  The other car arrived as we had setup half of the tents.  So everyone helped finish putting up tents and braving the cold before heading to bed.

This morning we woke up at 6.00am, with frost on the ground and on the tent fly.  So we then got ourselves ready, had a warm breakfast then we headed off to the start of Umukarikari track.  Once arrived we put on our packs and started tramping uphill (a couple of people of the group stayed behind for a short while to do car shuffling so we had transport at the other end of the track).

It took us a couple of hours to reach the bushline, where we had a rest and enjoyed the amazing views of Mt Ruapehu, Mt Ngauruhoe & Mt Tongariro.  The couple of people who did the car shuffling had reached the rest of the group.  We then continued on along Umukarikari Range.  We stopped for lunch, where you could not have asked for better weather or view, which we could see Lake Taupo.

As we were reaching to the top we encountered snow, which made the whole area quite magical.  We continued along the ridge until we spotted the hut, which meant that we had to come off the ridge.  Finally at 4.30pm we reached the hut.  We got changed into warmer clothes and decided most of us will sleep on the floor of the hut (it was full) as it would be warmer than in a tent, which a couple of people in the group decided to do.  Had dinner and then waited to go to bed. 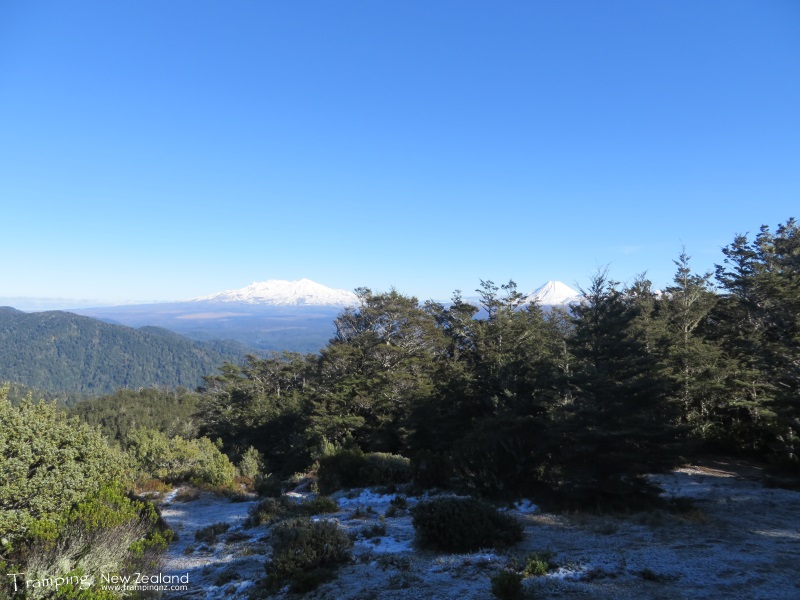 Woke up to a nice crisp day with frost.  We packed up our sleeping bags and had some breakfast.  Then we packed the packs up ready for going down the river today.

We followed and crossed the river many times during the day, which the water was cold; close to freezing, but got used to it after a while.  Also encountered some permanent frost which was amazing to look at and touch.  We stopped several times for breaks and taking in the scenery.  For lunch we stopped in a dry sunny spot.  Then continued down river for the rest of the afternoon as we knew that we would be starting to loose the sun soon. 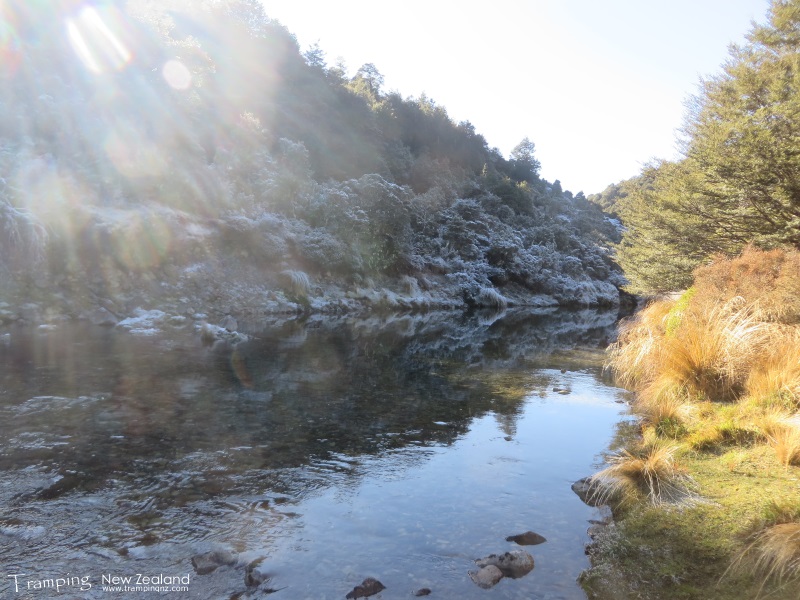 On one of our last river crossings we filled up our water bladders which will do us for the next day.  We managed to reach to where the junction with Urchin track is the otherside of the river, so this is where we decided to camp for tonight.

So we started collecting firewood to put together a fire and setting up tents before getting changed into warm clothes.  We got the fire going to keep ourselves warm and had dinner, as we know it is going to be another frozen night.  After dinner we started preparing to go to bed, and had noticed that our socks had frozen solid, so we undid the laces on our boots and located these under the vestivals of our tents.  Prepared our packs and water to prevent freezing as much as we could and located it under a fly under the trees.

Went to bed all fully clothed as it was going to be a freezing cold night.

Woke up to a fine day, with basically everything frozen including inside & outside of tents, boots & water.  So we spent a bit of time to try and defrost our gear while having some warm breakfast.  So we packed everything up frozen and putting on our frozen boots and then headed across the cold river to the start of the Urchin track.

We slowly started hiking uphill, which was not easy when boots are frozen, feet are cold and not able to lace them up normally and the tube for camel bak is frozen with an iceberg floating in the water.  As we continued on, we started to defrost and some normallity starting to set in.

Had a break just above the bushline in the sun, which by this point we had defrosted, before continuing on up to the trig point.  As we were approaching and while at the trig point we again admired the amazing views, which makes what we had gone through this morning all worth it.  Once at the top, it was then all downhill to the end of the track, which most of it was bush, but not very easy on your knees.  Finally we made it to the end of the track.

So a car shuffle was made to collect the other car from the other end of the track which took about 30 minutes, before we loaded up the cars to start heading home.  We stopped at BK in Turangi to have lunch, then we went to Tokanau hot pools to warm ourselves up.  Then we headed back to Auckland, unfortunatly we hit hit the going back to Auckland traffic, so it made travel time quite slow, especially when SH1 was closed due to a crash, which meant that we waited it out by having dinner in Hamilton.  Finally arrived back into Auckland about 9.30pm.