For the Labour Weekend, I decided to check out the Umukarikari Range in the mighty Kaimanawa's. I was joined by Jaime, Ryan and Angus. This tramp was in preparation for a six day tramp at the end of November.

Warning: This tramp should be only be attempted by experienced trampers, due to the difficulty in wet weather. See track safety notice.

Today we left Auckland at 6.30pm, travelled by Angus' Land Rover down to Laurie's Leisure Lodge near Turangi. There were no major traffic problems despite being a long weekend.

About halfway during the trip we stopped at Waharoa for some food. Then continued down to Laurie's Leisure Lodge and arrived at 11pm. From here we crashed into bed because we had an early start tomorrow.

This morning we woke up at 6.15am, and got ourselves ready (packed our packs) for a few big days ahead of us. For breakfast we had some pancakes. Once we were all ready at 7.30am, we headed off to Turangi, where we got our transport to Umukarikari Range.

Our transport was by Alpine Scenic Tours, in a small mini bus. The driver took us to the start of the track, which was about 1/2 hour from Turangi. 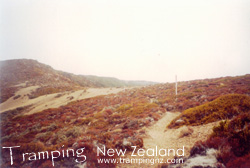 From the ridge we could see all around us including Lake Taupo, Turangi, Mt Ngauruhoe, Mt Ruapehu and the Kaimanawa Mountains. We basically reached near the top, had a break for lunch. The temperature started cooling down, so we started to forge on, then the weather started closing in. Once we go to the most exposed part of the ridge, we had to put on our polo fleece jumpers, due to the wind-chill factor. You could not see 10m in front of you and had to put our hands into our pockets as they were starting to go numb.

Once we got past the most exposing part of the ridge, it started clearing up again, as we started going down hill towards the hut. We reached the hut about 3.30pm, where we rested for the rest of the afternoon. Played a card game (up and down the river), put up our tent, and cooked dinner.

This is where I for the first time tried freeze dried food. I had a 'Roast Lamb', it was not bad, so I gave it a big tick (this is a good start in reducing my pack weight). We went into the tent and played the card game again and then into bed. At about 11.30pm it started raining and it continued throughout the night.

It was still raining when we woke up this morning. There were some surface flooding. We packed up our bags and took these to the hut, where we had breakfast. Once we had breakfast, we packed up the tent, and prepared ourselves to tramp in raincoats to stay dry today.

We did 8 river crossings to make our way down the flooded Waipakihi River. When it got to high, we had to go bush bashing up cliff's to continue down river. We stopped once, put Angus' fly up to try to warm ourselves up with a cooker going for heat (drink).

At about 6pm, we were all soaking wet and cold. About 1.7km away from the actual campsite, we found a place to camp for the night (it is still raining to this point).

Started setting up the tent, where we discovered the tent fly got ripped when we were bush bashing. However we are lucky as Angus sleeps under a fly only, so we put it over the tent to cover the rip and it made some shelter out the front of the tent.

Due to hypothermia starting to set in, we all stripped ourselves of our wet clothes and changed into dry warm clothes, and into sleeping bags. During this time we tried to start a fire, to allow us to warm up, due to wood being wet, it was a hard job. So we tried with some petrol from Angus' cooker, but to no avail, the fire would not even burn dry paper. Plus Angus' cooker would not start, so had to use the cooker that used pupane/butane gas. This was used to cook our dinner.

After dinner we basically went to sleep. During the night the rain did eventually stop.

Woke up to a fine day, with cloud burning off in the valley, and saw the sun for the first time. Today we are going to walk out, past the camp site and up the Urchin Track. The river had dropped down considerably allowing us to walk alongside the river.

Hiked towards the camp site, we would not have made it last night due to the river in full flood, plus the camp site was pretty full also with a tramping club. Had a quick small break and then headed up the track to the trig point.

We went uphill, which was quite steep, this went up to the clouds. Went along another exposed ridge to the trig point. Where we rang for our transport to make their way to the pickup point and had a energy boost break for our downhill assault.

Headed downhill into the bush which took about an hour to the end of the track where our transport was ready to pick us up. It was a great relieve to make it to the end, having accomplished the hardest and the most extreme tramp that I have been on.

Our transport took us back to Turangi, where we got lunch at the Fish and Chip shop, where you could choose your chip cut from french, crinkle and straight. Once we had lunch, headed back to Auckland, along the same route that was taken on Friday night. Arrived back into Auckland about 6.30pm.