For a winter tramp, we headed down to one of my favourite places in the country – Tongariro National Park. I was joined by Angus, Ryan, Robin, Chris M, Trevor and Alistair.

We left Auckland at 6.00am to head down to Whakapapa Village.  Stopped at Taumarunui for 2nd breakfast/1st lunch.  Finally we arrived at Whakapapa Village and visited the DOC visitor centre for those that required hut tickets.

We all then got changed, attached ice axes and crampons to our packs.  At about 12.30pm we put on our packs and set our course for Mangatepopo Hut which is about 3 hours away.

While have not been along this track for nearly 10 years, I have noticed that some parts of the track has received a bit of an upgrade, mostly for erosion, which is still evident.  We crossed a number of stream beds before making it round into Mangatepopo Valley where the hut was located.

Arrived at the hut and enjoyed some afternoon tea / 2nd lunch where we relaxed and contemplated what is coming up in the next few days on the tramp.  We cooked dinner and played some card games before heading off to bed. 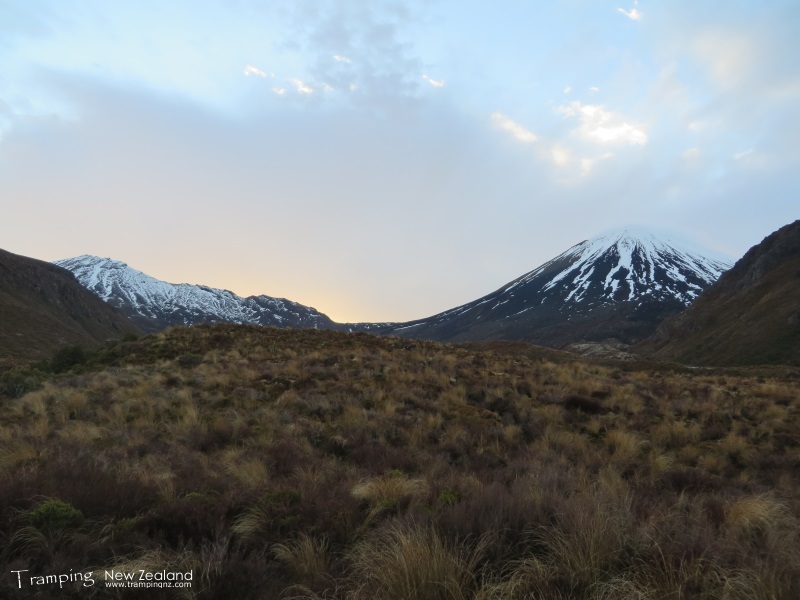 Today is our biggest day of the trip.  We had breakfast and got the all important weather forecast, since it is not looking too flash (which we knew before we started).  The forecast was for cloud to come in with rain, gail-force winds and -7 degrees at Red Crater.  We were hoping to either climb Mt Ngauruhoe or Mt Tongariro, but this is depended on the weather and we would make the call at the turnoff points.

So we set off early to make most of the good weather, as we started approaching Devil’s Staircase we notice that the wind and cloud started to pick up, so had a quick break before heading up to the top of the saddle.  The track has been re-routed round side of Mt Ngauruhoe and now has proper steps which has made the track longer and supposedly easier, however it did make it tough going especially with quite a heavy pack (due to extra gear and clothing for the conditions).

We made it to just below the top of the saddle where we sheltered for smoko and for some ice axe training / practice on a patch of snow for the potential ascent.  We got to the turn off for Mt Ngauruhoe and decided that we would not ascend and we would go for Mt Tongariro instead (being our preference due to the conditions).

So we then continued along South Crater and there was now snow under foot, which makes it harder to tramp through.  The cloud started coming in rapidly causing white-out conditions, so we ensured that all of us were within visible distance with each other.  We then started climbing up towards Red Crater and the wind started picking up, which brought the temperature down and made it harder to tramp straight.  As we were climbing up my glasses had frozen and unable to see out of them, so had to rely on my actual eyesight and there was also snow and ice forming on my camera case (and I assume this included my pack and myself).  At this point it was decided (with an automatic no) that we were not going to climb Mt Tongariro, as it was too much of a risk in these conditions. 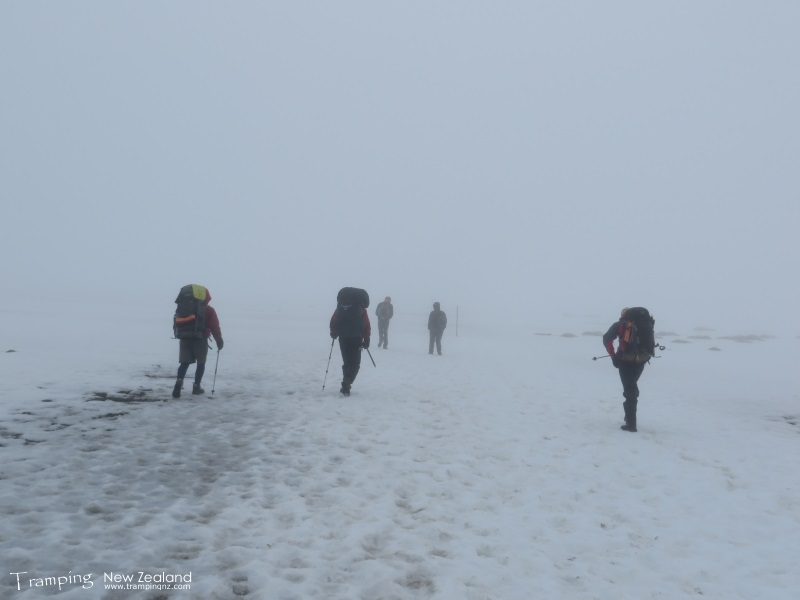 Finally reached Red Crater at 1868m, but from what I could see (not much due to the conditions), I could not really recognise it, but only knowing it by the experience of the terrain.  As we came down the other side we got to the Emerald Lakes (the weather eased a bit), we noticed that they were frozen over.  A couple of us in the group tested and were surprised that the ice was supporting them.

However we then continued on making our way down to Oturere Valley.  At this point it starting raining quite heavy and this continued the rest of the way to the hut, which I ended up being totally soaked, but not cold.  Finally we reached the hut and put the gas fire on to help with heating and drying out even though it did not work to well.  Played card games until dinner then went to bed (a very early night).

Got up about 6.30am but a had fairly lazy late start to the day, as it was still raining, not as heavy as the previous day.  Got the weather forecast and decided to leave sooner than later.  We left the hut about 10.00am in the cloud and rain.  We crossed a few valleys and then along the ridge to nowhere, we again had to ensure we were all within visible distance of each other.  Finally dropped into some bush were we had to go up and over a ridge in order to reach the hut.

We passed near the site of the old hut and continued further down the track to the new flash Waihohonu hut.  Once arrived we got the wood fire going, changed into some dry clothes and put out our wet clothes to dry.  We had lunch and played a mixture of different card games throughout the afternoon and continued into the evening after dinner.  Tonight we were also sharing the hut with another group, as the previous huts had been just to ourselves.

Got up to a nice overcast day where we had nice views of Mt Ruapehu and Mt Ngauruhoe.  We packed up and then headed off over Tama Saddle towards Whakapapa Village.

The track has also been upgraded quite a bit which allowed us to go a quite a pace.  However the weather slowly started to cloud in with a little bit of rain and temperature drop with some wind.  We had a quick smoko break at Tama Lakes junction before continuing.  We stopped by Taranaki Falls to admire its beauty before we finally got back to Whakapapa Village, completing the tramp. 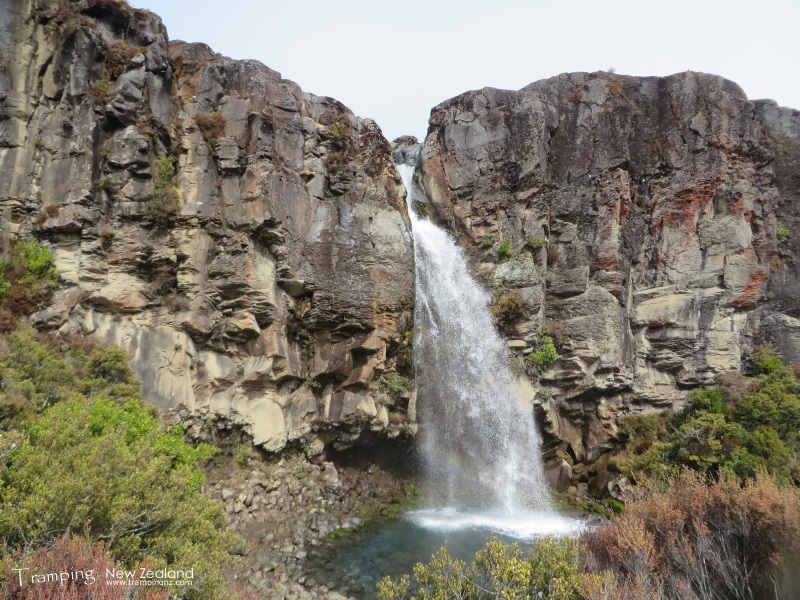 We then loaded up the vehicles and headed to Te Kuiti for lunch before driving back to Auckland, arriving home about 5.00pm.

This was a good trip and we learnt a lot, however we all wished that there was more snow so we could actually use the ice axes and crampons that we hired plus some fine weather also.