For the annual end-of-year tramp, I had a chance to check out round the mighty Mount Ruapehu while also going round Mount Ngauruhoe at the same time. You could say: circumnavigating two of the active volcano's in the Tongariro National Park. I was joined by Jaime, Ryan, Angus, Alistair, Trevor and Chris M.

Left early this morning to head to Whakapapa Village. There was a total of 4 hours driving and 3 hours tramping. We stopped for lunch in Taumarunui, this was the last of real greasy food for six days. Once we arrived at Whakapapa Village, we went to the DOC Visitor Centre to purchase our hut tickets.

Today we take the track to Mangatepopo Hut, which is 3 hours away. This is going through the tussock between Mt Ruapehu and Mt Ngauruhoe. It seemed easier going along this track this time round, compared when did the Tongariro Northern Circuit in 2000. I guess the big difference is my pack weight which is only 14kg's.

Woke up to a nice fine morning with some low cloud. This burnt off as we headed up the Mangatepopo Valley. Being advised by the hut warden that Soda Springs has now got Giardia in it, we could not safely collect water, but had enough for the day. Also at Soda Springs is now located a toilet facility - this is quite a good idea for the tourists doing the Tongariro Crossing.

It took a good 2 hours to head up, most of the time had to climb in the snow. It was easy for me as I was last in the chain and I just went in the foot steps that were created. We stopped several times for energy breaks and also to keep in contact with base camp (radio communication to Ryan and Chris M). Once we got to the top it was very windy, cold, sunny and lots of snow, with a great view. Took a small break just below the summit due to the wind, then headed back down. On the way down I found a good way to get down easily; sit on your bottom with legs straight out and slide (like going down a slide). This enabled to get down the mountain at speed.

Once we got back down to the saddle, you could see our tracks down the mountain. Had lunch and then headed through South Crater. Once we got by Red Crater, Angus and Ryan decided to go to Oturere Hut by GPS, rather than climbing Red Crater. Climbed up to Red Crater, past Emerald Lakes and then onto Oturere Hut for the night. The wind started to get up tonight. 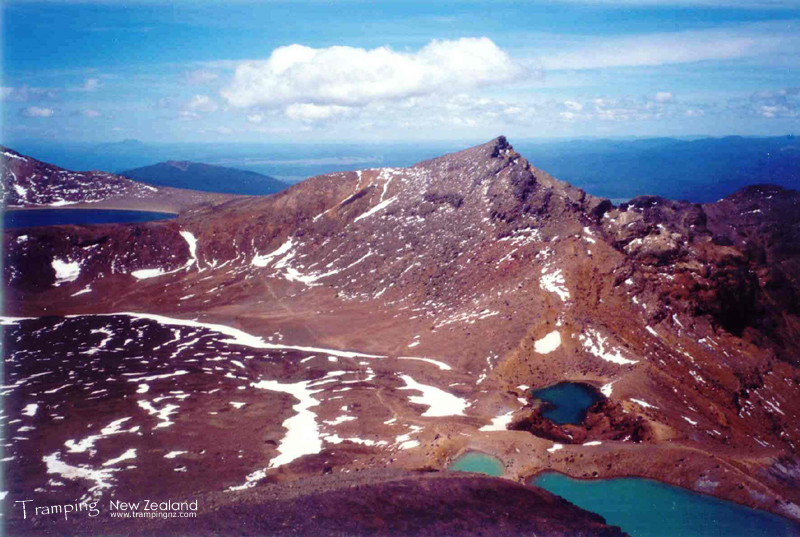 Today was the start of the bad weather to come. Mainly wind often gusting at gail-force speed, with cloud and rained often. Tramping to Rangipo Hut, which involved heading south past Waihohonu Hut, this meant going along the ridges which was nicked named "ridge to nowhere". Stopped at Waihohonu Hut for lunch, and then continued to Rangipo Hut.

Between Waihohonu Hut and Rangipo Hut was about 5 hours and seemed forever consider having to cross desert like surroundings - sand, rocks, valleys (including the famous Whangaehu River Valley - where the lahar goes down), and cross rivers. This seemed not to end, going up and down the valleys. After passing the Tukino Road (road access to Tukino Ski Field), Chris M started showing signs of Hypothermia, so we had a break and gave him a hot drink and energy bars, which helped the situation.

The highlight was going through the Whangaehu River Valley where the Lahar goes down, there was a 400m no stop zone - where we crossed a wire bridge which was high up and the wind gusting causing the bridge to be on an angle (has been washed away by previous lahars) then up the other side, lucky we did not hear any rumbling down as it has been suggested that the Lahar will happen this summer - NZ Herald Article.

Finally after a few more valleys we made it to Rangipo Hut, made a hot fire. There was a nice view from the hut towards the Desert Road and Kaimanawa Ranges. 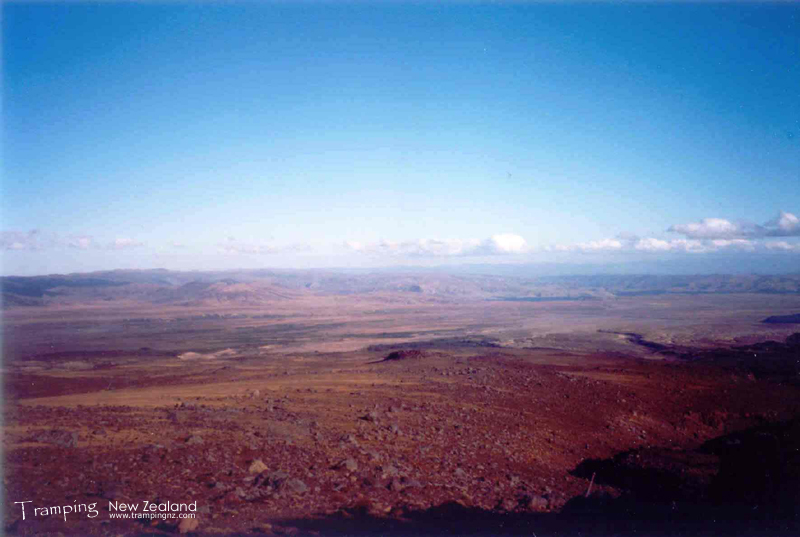 It snowed overnight around Rangipo Hut. Started heading for Mangaehuehu Hut, at first it was sunny then it turned to wind, rain, sleet, then snow. So going through a few big valleys, we were feeling the cold when at the top of the ridges. Reached Mangaehuehu hut for lunch and drying off. I totally changed into clean dry clothes and plus borrowing a jumper from Chris M. It has now started fining up a little, now heading for Blyth Hut, which is about 1 1/2 hours away - this was mainly downhill and on board walks, which made it quite a fast trip. We had the hut to ourselves tonight. The weather closed in overnight, most of us moved the mattresses to around the fireplace, centre of the hut due to dampness from the outside walls of the hut.

Another day of rain, took a short cut (track) to Ohakune Mountain Road, which we walked about 300m of. Continued down the other side, over a slipery rock face. Stopped at the Mangaturuturu (Wanganui Tramping Club) hut for lunch, then continued onto Whakapapiti Hut. While tramping past Lake Surprise (came out of middle of nowhere to our surprise) and then climbing a lot of steps "staircase" up a ridge. Then continued through many valleys to Whakapapiti Hut, where the fire was stoked up full. This is where we could eat all the food that was no longer needed.

Today was only 2 1/2 hours tramping out to Whakapapa Village. Again today was raining. It was a relative easy tramp out, crossing a river a few times, through the bush and finally out to the village. This actually took longer than expected, came out to civilisation about 10.45am. Travelled in Trevor's Land Rover home, we stopped at Te Kuiti for lunch. Got back to Auckland at about 4.30pm.