For new years tramp, we headed out to the Kaimanawa's.  I was joined by Chris S, Staci, Vanessa, Emma S, Cameron, Stuart and Alicia.

What to do at the start of 2020, thats right lets go on a 4 day (actually 3 day) tramp for a bit of an adventure.  With two cars leaving at different times, we headed down to Poronui Station.  I was in the first car and we made a stop in Tokoroa for a second breakfast/morning tea after the 8.30am start.  The second car was a couple of hours behind us.  So we then continued to Taupo where we stopped for last supplies and lunch.  Finally we reached Poronui Station, parked up, got changed and prepared our packs to get going.

The start of the track involved following the farm road into Poronui Station.  Then we turned off onto an access track to go through the rest of the farm.  There was hardly any shade and the sun was beating down on us, which made it hard going.  Finally we found some shade, so we took an extended break to recover, which was well needed.  Then it was back into the sun again, following the route across the farm.

Finally we reached the edge of Poronui Station and Kaimanawa Forest.  Now some real shade and bush, just how we like it.  Just a short climb along a hillside before heading down to the river.  Performed a river crossing and do a bit of route finding until we reached the hut.  The hut has nice views of the area.

Sorted out our beds in the hut and then it was down to the river for a swim to refresh ourselves.  Soon it was to start cooking dinner.  Considering we had the whole groups dinner there was a decision do we cook all of it or just enough for 1st group.  In the end we decided just enough for us as we did not have the big pots (which the other group had).  Once we had finished eating the 2nd group turned up.  So they then had a swim and cooked up the rest of dinner.

After enjoying the evening it was time for bed.  Since the hut was full the 2nd group slept on the floor.

Woke up and saw the sunrise, which was clouded by smoke caused by the Australian bush fires.  Had breakfast and got ready to go.  For the 1st group we left in 2 groups (2 each) about 15 minutes apart.  The second group was only just getting up.  So we will see them at the next hut.

We followed alongside Oamaru River, basically along the flats until we reached the bush about an hour later.  Had a quick break and then continued following the track which in places was undulating.  Since we were following the first 2, at a side river crossing I saw a wet footprint on a rock, so we knew that they were not that far ahead.

Finally we reached junction with Maungaorangi Track, where we met the first 2.  So this was our lunch stop.  After lunch it was then heading up a valley, which was quite hard work in the sun and heat.  Reached Waitawhero Saddle, which we stopped for a breather before continuing on.

Now it was heading down the other side, where we got to the rocky Ngaruroro River.  Found a place to cross the river, the water was really nice (could have had a swim).  Then it was up the otherside and around a bit to Boyd Hut.  Claimed our beds and chilled out.  I tried to find a stream to have a swim in but unfortunatly there was nothing next to the hut.  So had a splash of water from the water tank to cool down. 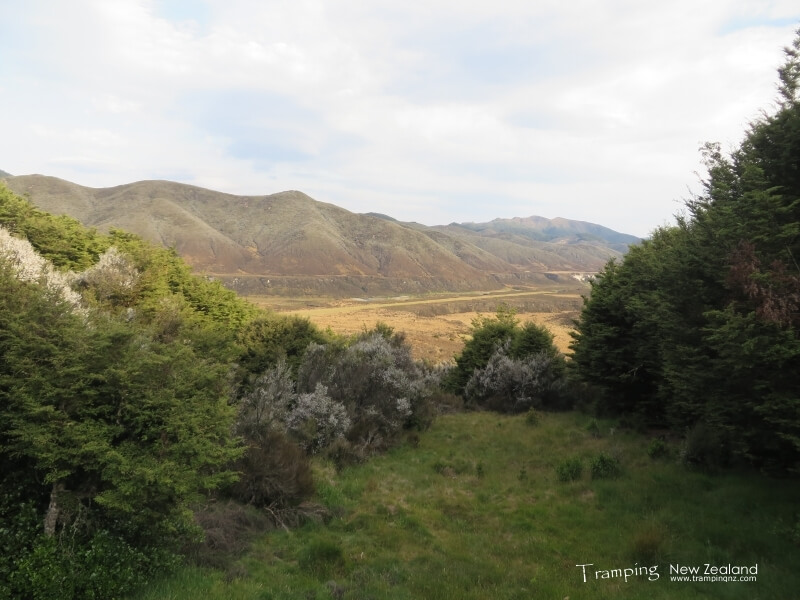 The second group arrived just before dinner and worked out that over the last two days the first group was faster.  We meet up with hunters that were also staying at the hut.  Apparently they had 2-way GPS communication.  Had dinner and enjoyed the evening.

Got up had breakfast and packed our packs.  We got talking with the hunters to see if they could arrange a helicoper ride out for us with their 2-way GPS, as we were not keen on crossing Poronui Station.  Even if this was not possible we were ready to go anyway.  The word came through that the helicopter can take us.  So we just chilled out for the rest of the morning.

Cooked up our dinner which we had for lunch instead.  Then the helicopter came, so the first group took the first ride and the second group took the second ride.  We flew basically over the route that we walked in, so it was quite cool.  The helicopter landed at their base which was next to the carpark that we parked at (how convenient).  So we reached the car and got changed into some clean clothes.  We waited for the second group to arrive before we headed off.

We stopped in Taupo before heading back to Auckland.  This was a great few days, the helicopter ride was a bonus (which shortened the whole trip by a day).