For an overnight trip, I decided to check out Leitchs Hut. I was joined by Vanessa, Chris S, Staci, Nathalie, Tim S, Stuart and Stephen.

Note: The first 1.7km is missing from "day 1 track" on profile and map due to not recorded on GPS, however "day 2 track" shows full length of Leitchs track.

Today we left Auckland at 8.30am and got on our way heading south.  We made several stops along the way including Otorohanga, which allowed us to get a 2nd breakfast or purchase lunch.  On the horizon, the predicted rain was about to come at us as we drove to the road-end.  Once arrived, we got changed into wet weather gear and ready to get going, only then noticing that some of the group food was left in Auckland (which was later confirmed).  So two of the group drove back to Te Kuiti to get the necessary dinner supplies, while the rest of us started out on the track.

For most of the way to the hut it was pouring with rain with lots of water everywhere.  In some places you could have mistaken the track for a small stream.  Along the track there were some debris which we had to navigate round.  As the afternoon continued on it started getting darker and the delayed lunch continued to be delayed.  We finally reached the hut with a small break in the rain, which allowed us to collect some very little dry firewood for the fire.

We got changed into warm clothes and made ourselves a home by putting on the fire, which also has a wetback.  Finally eating lunch and snacks while we wait for the two remaining group members with much needed group dinner supplies.  As it got dark the weather started to be windy and raining, it also hailed at times.  We sent out a couple of people to meet up with the rest of the group and found them coming along nicely, not far from the hut.

We finally had dinner, told some bad jokes/stories and went to bed. 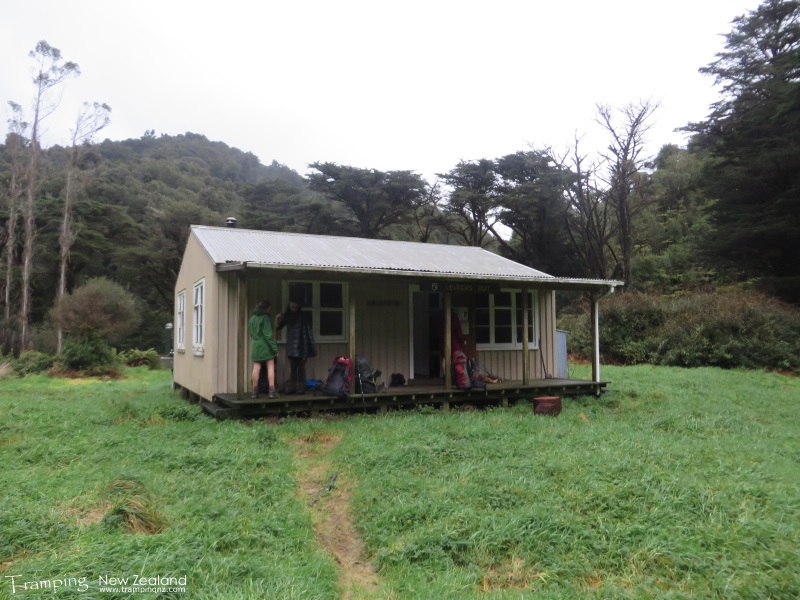 This morning we had a lazy sleep in and late breakfast.  Once packed up the weather had changed for some sunshine, which was welcomed.

So we headed back the same way that we came in and there is noticably a lot less water around.  Also being able to admire some of the views that we could not see yesterday was great.  Generally this is a fairly easy track to go along, especially for beginners.  We made it back to the cars by late afternoon.

We then headed back to Auckland, stopping at Te Kuiti for some hot food and at Bombay for dinner before reaching home.