For preparation for our annual week long tramp in January 2007, we headed to the Kauaeranga Valley in the Coromandel. Last time we did these combinations of tracks were in 2002. I was joined by Jamie, Ryan, Angus, Alistair, Trevor and three others.

Left Auckland at 7.30am to head to Kauaeranga Valley near Thames which is a 1 3/4 hour drive. We stopped at the DOC Kauaeranga Visitor Centre in Kauaeranga Valley to pickup and pay for our hut tickets (booked in advanced), then continued heading up the valley to the road-end.

At 10.00am we put our packs on and headed off up the Webb Creek Track. This track follows the historic packhorse route to Hydrocamp. In places this can be steep (steps cut out of rock) but it is the easiest way up to Hydrocamp. As the river level was low we did not use the flood detour swing bridges for the river crossings. While going up the track you get excellent views down the valley. It took 1 1/2 hours to get to Hydrocamp. 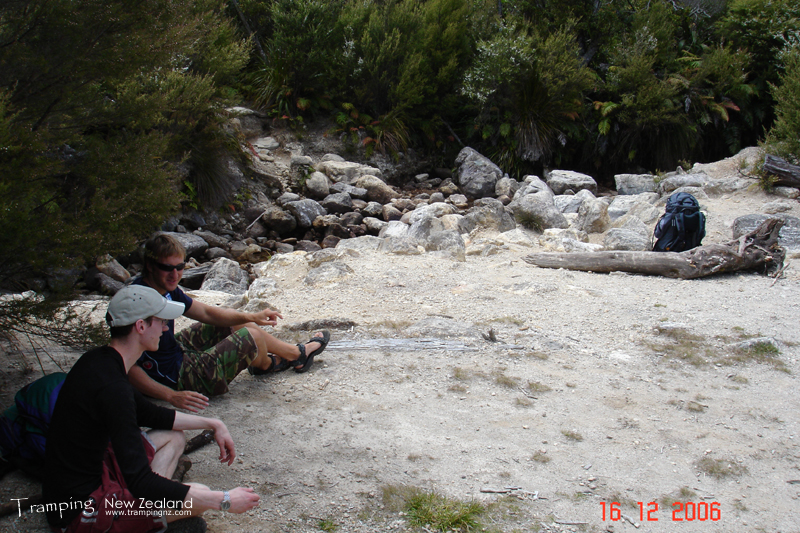 Stopped for lunch at Hydrocamp, where we rested. This area has changed a lot since last time; there has been a lot of plant growth, which has closed in the open rocky area.

From here we continued onto our destination the Pinnacles Hut, which was just over 30 minutes away.

Arrived at the Pinnacles Hut and we grabbed our set of bunks that we were going to utilise as the hut is fully booked tonight. We rested for about an hour before taking the challenge of climbing The Pinnacles.

The track to The Pinnacles themselves has been upgraded, which has a new path right up to the steep part. The new path has very well spaced out steps, which means that you do not have to use the same leg to climb up on, which is a relief and makes it easy to climb up the steep steps. The top part contains new ladders, rungs added which you can hang or stepping on and a viewing platform. 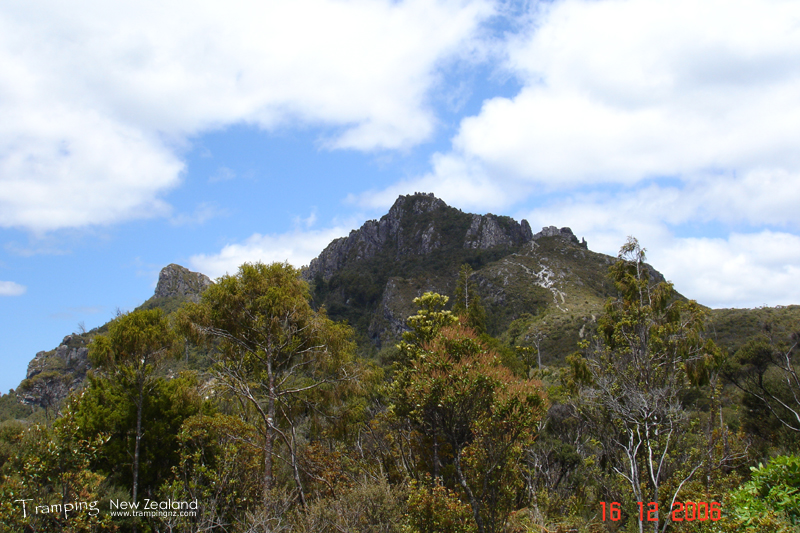 At this point in time the sun was at its hottest which made it very sweating work. The view from the top was great and was clear. Three of us managed to get to another part of The Pinnacles that involved bush bashing - this gave us a different view of The Pinnacles themselves. After our time at the top we headed back down.

Drinking a lot of water was in order after visiting The Pinnacles, being really hot and sweaty. A rest in the cool was in order for another hour.

At 4.30pm we decided to start cooking dinner, to get in before the rush of 72 others. Started eating at about 5pm and a huge (school group?) arrived at the hut. After eating dinner we relaxed and started playing multiple card games. Once it got dark the solar powered lights came on and shortly after we went to bed.

Woke up about 6am but managed to sleep in until 6.45am. Got up had breakfast and packed up. We headed off back to Hydrocamp at 7.45am, just after 30 minutes later we arrived. Had a break to boost our energy levels before tackling the Billygoat Track.

Headed uphill along the track which was a gentle grade. Took in the expansive views that we were provided. Over a look out we saw where the track was heading towards the billygoat incline.

Had a break at the river crossing and continued to the junction of Short Trestle and Hihi Track where we re-grouped. Continued along the Billygoat Track, where you could see the Billygoat Falls where the Kauri logs were sent down without success, due to breaking up at the bottom. 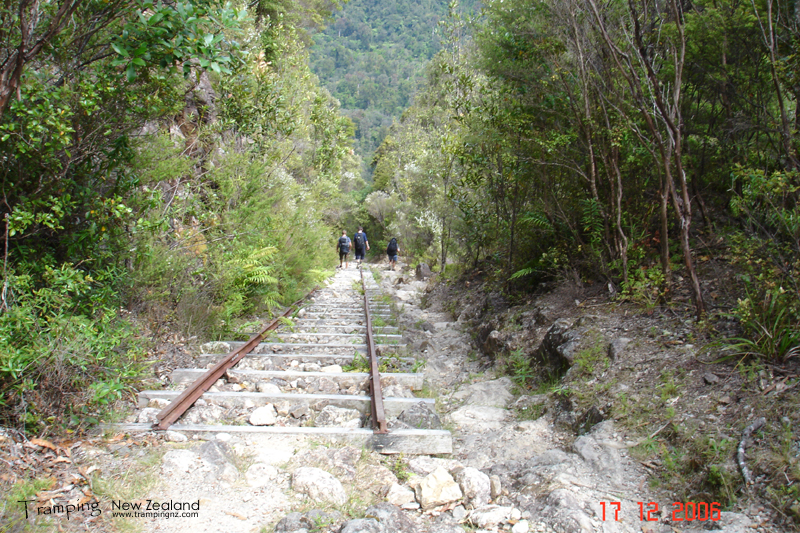 The railway tracks of the Billygoat Incline came into view, which meant going down the steep incline for a while. We continued onto an unmarked track to Billygoat Landing which cuts off some extra distance to the car park, which was steep in places. Hit the river, which we crossed and linked up to Webb Creek track, then finally headed back to the start of the track.

Once back at the cars at 11.30am, we rested and had lunch while waiting for the rest of the group to arrive.

Hopped into the cars and started heading home. On the way home (as usual) we stopped at Pokeno for big ice creams. Arrive home finally at 2.30pm.