For the first weekend in December, we headed to the Coromandel Range where a challenge was awaiting us. I was joined by Jaime, Ryan, Angus, Alistair and Trevor. This was in preparation for a five day tramp in mid February 2006.

Warning: This tramp should be only be attempted by experienced trampers, due to the difficulty.

Today started from Auckland at 6.00am, this involved a 1 1/2 hour drive to Kauaeranga Valley near Thames. The tramp started and finished at DOC Coromandel Forest Park Visitor Centre in Kauaeranga Valley.

We chatted to the DOC lady who was on duty, who knew the area well and could detail track conditions / timings. After this helpful advice, we set ourselves up to tackle the challenge.

The first track of the day was 'Piraunui Track', which started on the other side of the Kauaeranga River opposite Shag Stream Campground. From the advice of the DOC ranger it was advisable to wear trousers, but keeping these dry crossing the river proved the first challenge in trying to find the start of the track.

We followed the marked track across farmland, which contained quite a bit of gorse. Then once getting into the bush, a gentle climb up the valley, with some good views, this involved some bush bashing in parts. Finally reached Kopu-Hikuai Road (State Highway 25A) in about 2 hours.

We had a short rest before heading up the road. While heading towards the 'Kaitarakihi Track', some refreshing rain fell, cooling ourselves down. Of the 70 plus vehicles that passed as during the period on the road only about 4 of them acknowledged us.

At the start of the track we had lunch, the time was only 11.15am. To get to the top of 'Mt Kaitarakihi', the sign said about 3 hours. For the first 2 hours it was a gentle climb, on a track which looked like that it just had some maintenance done not that long ago.

Once we passed the turn off to a kauri tree, this is where we started seeing views of the hill yet to finish climbing. Now it started to climb, but then we hit something. 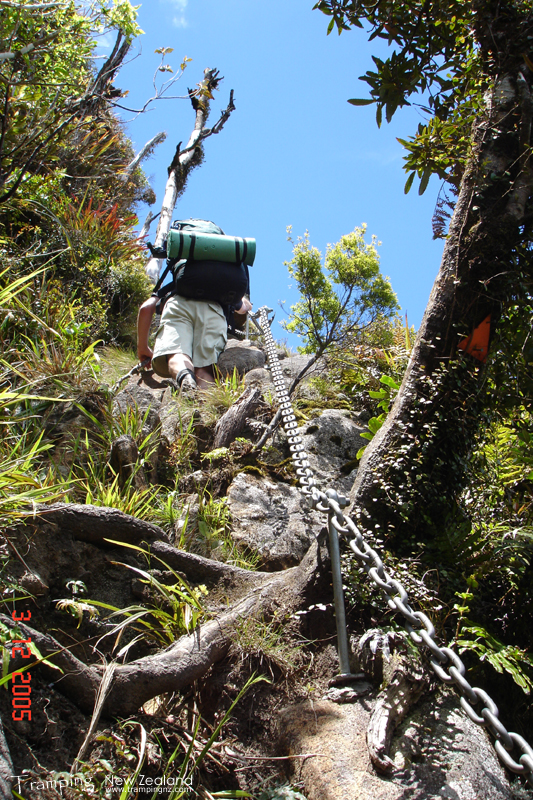 That something was a rock face; yes we had to climb this. Although dangerous, there was a massive heavy duty chain to help us to get up and to avoid going over the edge, which was secured well to the rock face. There was a good view where could see how far we have come so far today, and to either side of the Coromandel.

Once we reached to top of Mt Kaitarakihi at 852m, one of the highest peaks in the park. Had a rest on the summit before making our descent. Going down hill was a lot easier, but just as difficult, having to climb through trees. The track headed gently downhill to a junction with the 'Hihi Trig Track' and 'Hihi Valley Track'. 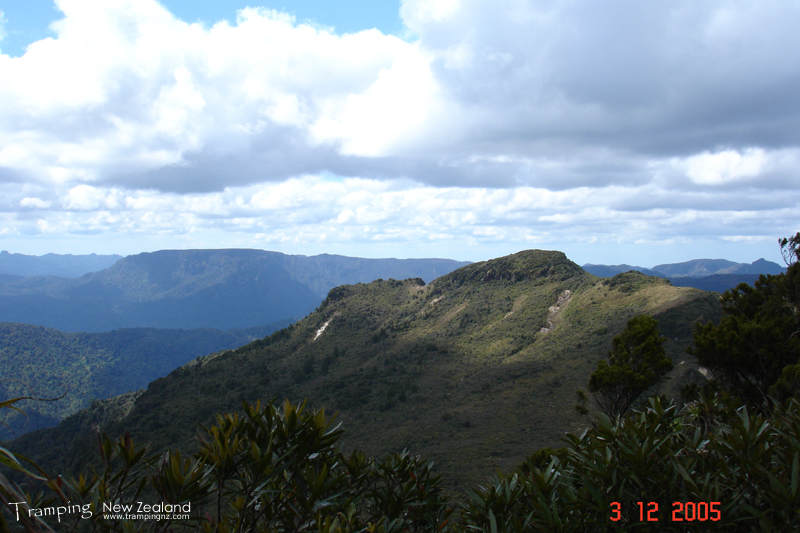 We found a small clearing where we could locate two tents, to setup the campsite. This was a tight fit, but managed a small area to sit round and cook dinner. Due to daylight saving it did not start getting dark until 8.30pm; however we played a card game until then.

Woke up after 7.00am to a grey day. Had breakfast and packed up our campsite, we were away by about 8.30am. Today was heading all downhill back to the visitor centre via 'Hihi Valley Track'. Plotted our movements on the topo map to the GPS. Started with wading through cutty grass, then bush bashing following a very hard defined route.

The track sign said 4 hours, but with advice from the DOC ranger that this could take up to 6 hours. We headed slowly due to the track conditions and bush bashing required, this was mainly along a ridge. During this time the weather started to fine up to a nice day.

There were a couple a steep parts where we had to climb down several hundred metres over a small distance, while this was only one of the obstacles that we come across. Other obstacles include loosing the track altogether, climbing down slips and rock faces, over trees in the path. I find this hard to describe as this is one of the worst tracks I have been on, but not even half way yet for the day.

Finally we reached the river in the Hihi Valley in about three hours. We crossed the river for a place for lunch and you could not see where we just exited the bush. Once lunch was eaten the sun came right out, started building a dam with rocks so we could cross it later. 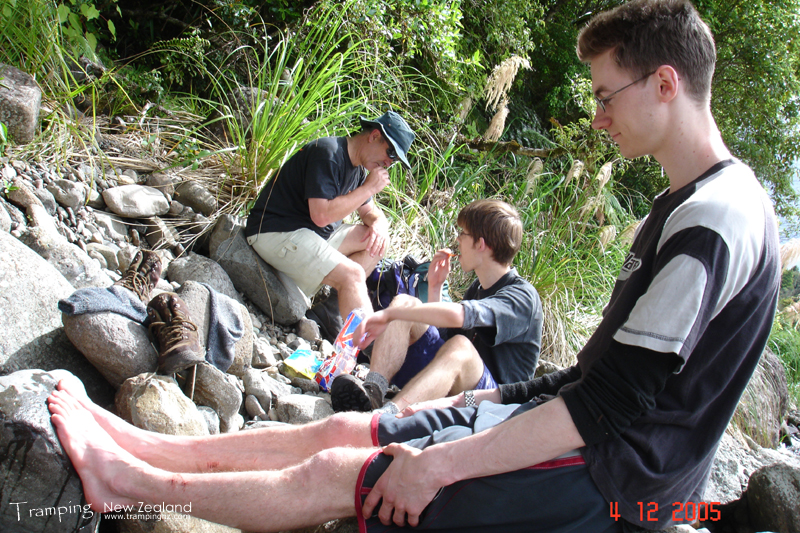 After lunch, headed down 'Hihi River' over rocks and in the river itself. This presented a challenge as there were some slippery rocks, deep pools and gorse on both sides. We managed our way down with walking sticks for balancing so we did not fall in.

During our way down it rained for a bit, again this was refreshing, but heavier than previous day. Being in shorts and polyprop, got soaked but dried quickly. The deepest part of the river got to just below my hips. This river seemed to go on forever.

Towards the end we crossed a small bit of farmland with long grass and into some bush before finally climbing up a difficult slip to get up to the road. From here we were a short distance from the visitor centre. Got back to the cars about 5 3/4 hours from where we camped.

On the way back to Auckland we stopped at Pokeno for a large ice cream each. Arrived home at 5.30pm, feeling sleepy, stiff and sore from the downhill ascent.