As this is the second part of a series of tramps that were planned for the rest of the year. This tramp is a warm-up tramp for our end of year 4 day Tongariro tramp.

We decided to be adventurous this weekend by Tramping in from Whatipu on a Friday night (lucky there is daylight saving). We set off from Whatipu about 7.10pm, first climbing the big hill at the start of Gisbbons Track.

Then it got flat and pretty easy tramping. As the sun started to set, it slowly started to get dark. We kept on tramping until we could not see any more, which made it more interesting. Because of this we slowed down our pace, often could not see in front.

About 8.30pm we got to the joining with Muir Track, it was decided to turn our torches on as it was downhill from now onwards into Pararaha Valley. From time to time we had to stop because Marc's cooker started leaking gas. He said it was in an air-tight bag (obviously not gas tight). Jamie deliberately took a short cut and lost his drink bottle, it was picked up by another person in the group.

About 10.30pm all hell went loose as we arrived at the Pararaha Valley camp site. Most of us started eating and cooking up hot drinks. It was worked out it took about 2 1/2 hours, the time it should take. (If it was daylight we would half that) Then we went to set up tents and slept.

In the morning we had a alarm clock which was a big Jumbo Jet Aeroplane going over us, so we were up at 6am. Had breakfast and take down tents. At 8am we left to go up Pararaha Valley which took 2 hours to get to the carpark. Michael hurt his ankle, so it had to be strapped up. There was not very much water, which meant that a lot of the way we were in the water.

From 10am to 10.30am we had a lengthy break. After this break it was to return to Pararaha Valley by Buck Taylor Track. The fast three-some Jamie, Ryan and Phil were given the option of taking the longer track, which they did and they still bet everyone else down to the sand dunes at Pararaha Valley. 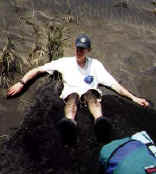 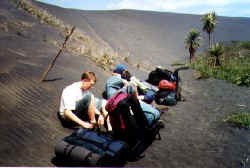 Had a break for lunch, then it was the return to Whatipu via the Coast. So we tramped through the marsh / swamp land, at times the water got to waist level. Had a break at a cave before a 20 minute walk to Whatipu.

We all had an enjoyable time.