For an overnight tramp, we headed out to one of the local islands off the coast of Auckland.  I was joined by Chris S, Staci, Tim F and Stuart.

Arrived at Rangitoto Wharf, today we are heading to Home Bay on Motutapu Island.  To start we walked the coastal track, which takes us the scenic way to Islangton Bay.  Went along to coast and then headed inland which involved going over the scoria/lava.  It was a hot sunny day and it did not help that the scoria relects the heat also, making it hotter.  So we had a few breaks along the way.  We reached the coast again and continued along until we arrived at Islandton Bay Wharf, where we stopped for lunch under some shelter and a nice cool breeze.

After lunch we continued along the coast until we reached the causeway, which was the link to Motutapu Island.  Crossed the bridge and headed across farmland along the hilltops.  Got some amazing views looking over Rangitoto Island and with Auckland in the distance.  Finally it was downhill to Home Bay.  We reached the campsite, found a nice beachfront spot with a big shady tree.  Put up our tents and then went for a swim in the sea to cool down and feel refreshed.

For the rest of the afternoon we just chilled out.  We did a short walk to the wharf, historic homestead and some ship wreakage.  Cooked up dinner and enjoyed the evening, eventually went to bed. 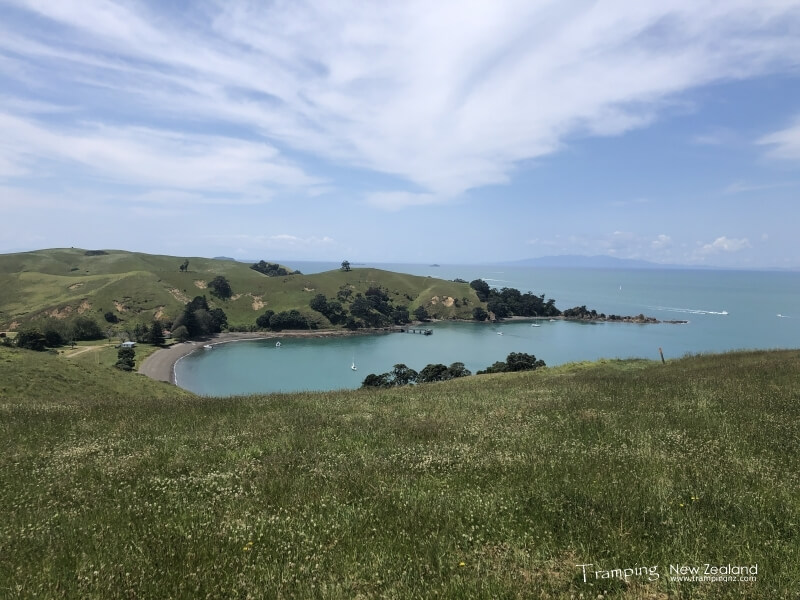 A beautiful morning to wake up to with the sun and the sea.  Had a bit of a lazy morning, had some breakfast and then packed up.

We decided to head back the same way that we came across Motutapu Island (originally we were going to do a different track).  Then back onto Rangitoto Island, we headed along the road.  The road was hard going as we were hot.  Made it back to Rangitoto Wharf where a ferry just turned up, which we did not go on.  We decided to go for another swim which was well worth it, as it was needed.  After the swim we had some lunch while we waited for the next ferry to arrive.

We caught the ferry and the water was a bit choppy.  Arrived back at the ferry terminal and then headed home.  Great overnight trip.