We decided to do a trip to the far north.  I was joined by Chris S, Staci, Stuart, Cameron, Chris L and Kirsty.

We left Auckland late morning and headed north.  It was a casual drive up making a few stops along the way including a lunch stop in Warkworth, pub stop in Whangarei (to meet up with the other car), plus a last supplies shop and a final stop in Kawakawa.  We reached our accommodation in Cable Bay late afternoon.  For the rest of the day we chilled out, had dinner and sorted out our packs.

Got up and got ourselves ready, then packed the cars for a 1 ¾ hours drive.  While continuing heading north there was the odd bit of rain while driving but the weather was looking promising.  We reached Te Hapua in plenty of time and the track transport was able to take us straight away to the start of the track.

Got dropped off at the start of the track at Spirits Bay, we decided to have lunch before we started.  Once ready we started heading along the track.  The track initially took us behind the sand dunes, then we decided to walk along the white sand beach.  After half an hour, we stopped and some of us decided to go into the sea for a swim. 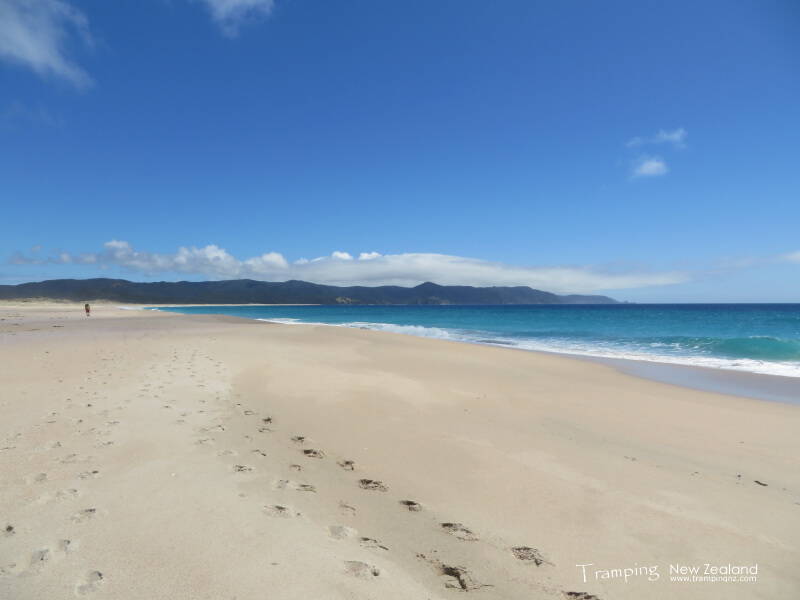 We continued going along the beach, this was harder than expected as the sand was soft in places and the beach goes up and down.  After walking along most of the beach, we then headed inland through Waitahora Lagoon and through some bush before coming out at another beach.  Over some rocks and we were at Pandora.  We stopped and had a swim before heading up to the campsite.

Arrived at the campsite and got changed before putting up our tents and putting on dinner.  We relaxed for the rest of the evening, watching the stars and a possum coming out for a look before going to bed.

Got up to an overcast morning, with cloud quite low around the hills, today was another short day.  Once ready we started heading uphill to get up onto the ridge.  On the way we took a short detour to some rock pools, which looked good for a dip in and had an awesome view to go with it.  However, we continued on up through the bush.

Once we got up onto the ridge line track, we stopped for a morning tea break.  Then we continued on along the ridge which provided some views while the cloud burnt off.  We reached back to the coastline and stopped for lunch which had some awesome views overlooking the water.  There was a couple of uphill bits before finally heading downhill to Tapotupotu Bay.

Arrived at the campsite, put up our tents and chilled out for the rest of the afternoon.  A swim was also in order.

We couldn't believe how many people were arriving at the campsite, then we forgot it was Saturday of the long weekend.  This campsite is road-accessable.  Had dinner and continued to chill out on the beach for the remainder of the evening.

Got up to a stunning sunny day for our biggest day, so we got away early.  First it was heading to the other end of the beach to start the first uphill of the day.  We climbed up the hill until we reached the ridge, which we followed round before heading down to Sandy Bay.  Had a break at the bottom.

Along the small beach and again another uphill and this time it is up to Cape Reinga.  Once at the top we visited the lighthouse.

Then we headed down to Te Werahi beach, where we stopped for lunch on the rocks which were in the shade. 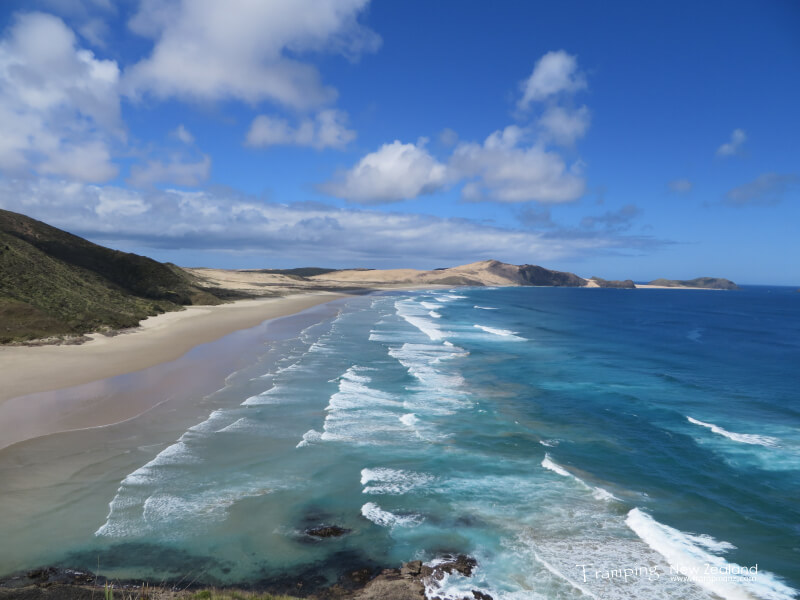 After lunch we continued along the beach before heading up Herangi Hill and around its sand hills by Cape Maria van Diemen.  There were some lovely views of different landscapes around here.  We continued on and had a small break under a small amount of shade that we came across.

We finally reached Twilight beach, which was another beach walk all the way to the other end to where the campsite was.  Arrived at campsite and put up our tents before going for a swim.  However our swim was cut short because some rips started to form, so we got out.  For the rest of the afternoon we relaxed and there were quite a few other people in the campsite.

Had dinner, watched the sunset and went to bed.  We noticed that there were a couple of possums around.  So we tried to secure away everything.

In the night the possums had a lot of fun, as we got up we discovered eveidence of their presence.  They have attempted to get into our packs.  All campers shared their stories of the night.

Had breakfast and got ready to go.  Firstly it was up and over Scott Point, which did not take us too long to get to Ninety Mile Beach.

Once at the beach we continued onto Te Paki Stream.  We stopped for a break before walking up the stream.  Towards near the end of the stream we took another break, where we watched some people sliding down the sand dunes, this was quite entertaining.  Then we continued onto the carpark to wait for our pickup.

After a short wait for our track transport, it arrived to take us back to our cars.

Once at the cars we proceeded to head to Kaitaia, stopped at Container Cafe for some food to eat for lunch, then continued onto our accommodation.

Arrived at our accommodation and we chilled out for the rest of the afternoon and evening.  For dinner we had pizza and chips.

Final day, got up and had a lazy morning before heading to a Cafe for breakfast.  The size of the plates of food were big and were amazing.

Then we started heading back south to head to home.  We made a few stops along the way including Kerikeri and Kawakawa.  Our final stop was at Uretiti Beach where we went for a swim.  Got back to Auckland after 5pm.