Due to not writing the report after the tramp, this one is done from memory.

For the end-of-year tramp, I had a chance to check out round the top of the North Island. This tramp was initially planned for end of 2001, but due to everyone's commitments at the time, it got delayed until 2002. I was joined by Jaime, Ryan, Angus, Alistair and Trevor.

Today was a drive from Auckland to Waitiki Landing (21km South of Cape Reinga). This was our base for the trip. Had lunch at Kaitaia. We played table tennis competition in the games room that evening.

Today tramped from Waitiki Landing to Te Paki stream, this was first the 4km’s. Had lunch once we were on Ninety Mile Beach. Then we forged on for another 4km's to Twilight Beach, our location for tonight's campsite, this was past Scott Point. Once at Twilight Beach, found a location for our tent, and then slept in the sun for the rest of the afternoon. After dinner we headed up to Tehepouto Point for a look and then back to the beach, had an open fire while watching the sunset.

Had breakfast and then packed up camp, continued along Twilight Beach, at the end walked along the cliff top where had close views of Cape Maria van Diemen, this is where we had a morning tea break. Walked along a large sand type hill which was quite visible from all round the area. Dropped into Te Werahi Beach, at the start there was a stream that we used to cool ourselves down. After about an hour of walking along the beach, finally reached Tarawamaomao Point, where was a steep climb up to Cape Reinga for lunch. 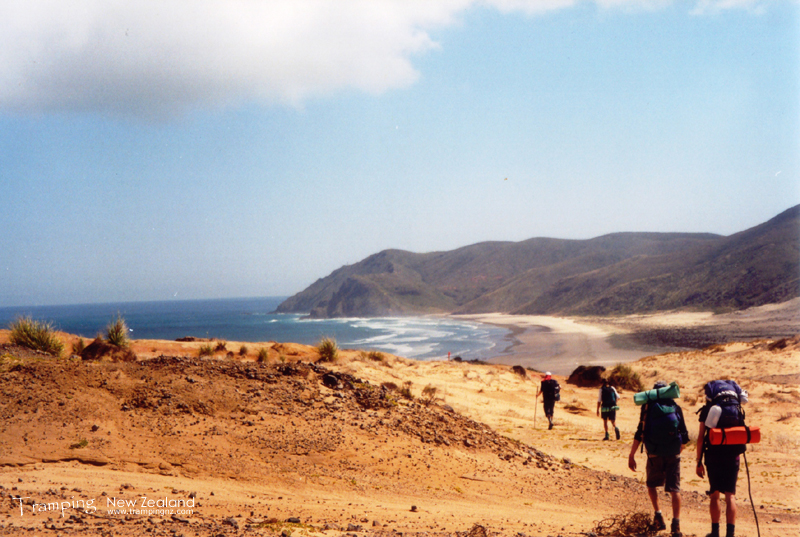 Had lunch at Cape Reinga and then walked down to the lighthouse for the expansive views. Then continued onto our destination campsite for the night. Dropped into nice Sandy Bay, it was a nice small place, however had to continue on to Tapotupotu Bay. It was another steep climb up the valley, along a ridge, then down to our campsite. We found a nice location in the campsite under a tree, where we relaxed for the rest of the afternoon. We also meet up with a Moari visitor who was also in the DOC campsite for the night also. 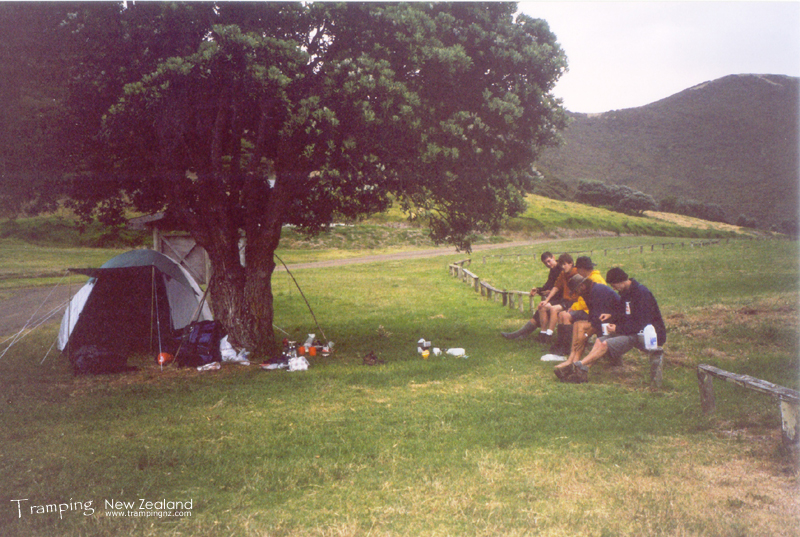 Finally we went to bed as the sandfly's were biting, not knowing the sandfly's came also. After several hours of sandfly's buzzing around and biting us. It was decided for a mass kill in the tent, managed to kill them all, and the tent now blood stained. Now we could sleep for the rest of the night. However Jamie and Angus sleeping under a fly, we could hear Jaime being bitten to death.

After not getting much sleep and a lot of sandfly bites to prove it, we decided to rename this bay to "Sandfly Bay", where we were "eaten alive by sandfly’s". After having breakfast had another steep climb up to the cliff tops, where we could see Spirits Bay with its white beach. Today we were heading back to our base at Waitaki Landing, turning inland to Te Paki trig. Had lunch before Te Paki trig on the intersection to Pandora, which leads to Spirits Bay. Once up to the highest point (310m) of our tramp, it was all downhill.

This area was covered in bush with a well defined track. Upon making it near Te Paki, came out to farm land, continued down to the gravel road to Waitiki Landing. Finally making it back for an afternoon of relaxation, where we played cricket in the camp ground. Had dinner then relaxed further then we went to bed.

Today we were heading back to Auckland. Firstly headed for Te Paki Stream to head down Ninety Mike Beach in the 4x4's. Some of us climbed to the top of the sand dunes, tried to slide down the sand dunes using our survival bags - which did not work. We made a Toi Toi fence across the stream when a Rav 4 came screaming past at speed trying to dodge the fence that we constructed.

Continued further down the stream we found the Rav 4 upside down with it occupants shaken. It came off the hard surface and into the stream. Being part of the Scouting movement, we pulled it back upright, unfortunately there was some damage and we cleaned up the accident site. We advised the occupants to go back to Kaitaia via the road. We continued down Ninety Mile Beach and make it to Kaitaia for lunch at McDonalds.

After lunch we headed back home to Auckland. The trip was enjoyed by all.